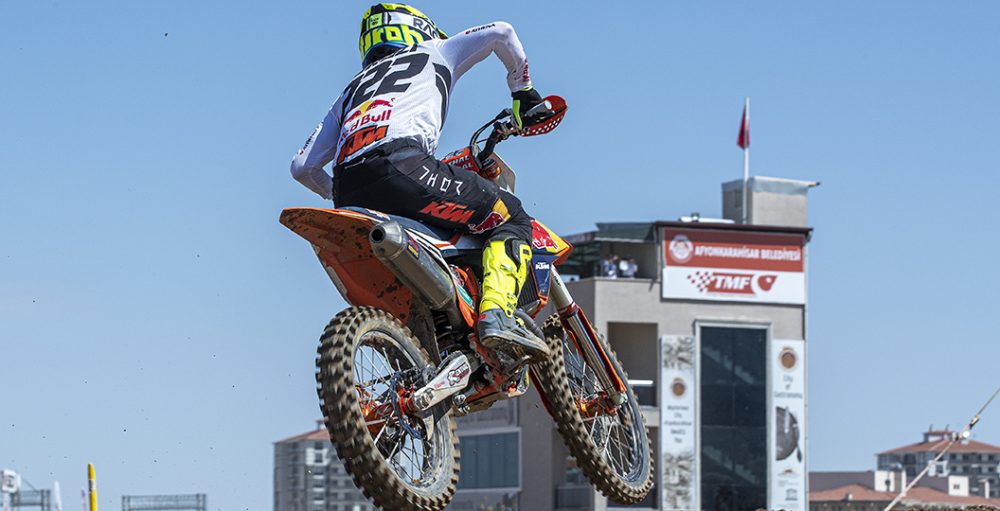 The Moment: MXGP of Afyon

The key moment that occurred at round nine of the 2021 FIM Motocross World Championship on Wednesday, that being the Grand Prix of Afyon that was held on the Afyonkarahisar circuit that hosted round eight, came in one of the most entertaining races in recent memory. A four-rider fight for the win in the first premier class moto gripped fans across the world.

Jorge Prado rocketed into the early lead in moto one, as he does so often, but he crashed out before the halfway mark. Prado revealed his cuts and bruises after the race – he really did put himself through the ringer and was fortunate to secure 18 points in the second moto. Romain Febvre, Jeffrey Herlings and Tim Gajser leapt into an engaging battle for the lead at that point, one that went on until the very last lap.

Everyone knows how it played out now. Febvre crashed on the last lap and handed the victory, as well as 25 valuable points, to Herlings. Gajser was the only star to finish in the same position that he begun the last lap in, because he lost a spot to Antonio Cairoli. Cairoli was not featured in the fight for the lead at any point before that last lap, but the pace that he ran whilst ripping around in fourth was awe inspiring.

Words are not going to do the speed that Cairoli showed justice – numbers are needed to do that. The time that he gained on Herlings in the last six laps has been outlined below. The differences may not seem radical in comparison to other tracks, but there was nothing to separate the riders at Afyonkarahisar. It was so, so difficult to make a difference and gain time. Cairoli managed to find out a way to do that, despite the fact that hard-pack tracks are not necessarily his strong point.

It was not like Cairoli was doing a jump that no one else was, he was simply carrying much more momentum from one corner to the next. Momentum is crucial on a track like Afyonkarahisar – it was so fast that it was possible to carry speed everywhere and it was the only way to really make a difference. It is unfortunate, in a sense, that there was not a camera following Cairoli around in the final part of that moto, because watching him ride was like a masterclass. It truly was one of the greatest rides of his career.

“Coming from the back, I lost a lot of energy in the first race,” Cairoli said in a post-race media event. “I am happy overall – the speed is there and the fitness as well. I just need to figure out that part of the race, the start, a little bit. I am happy to be on the podium overall, but of course the condition was good. I wanted more but could not get it. I hope we can have a better result in Sardinia. I like Sardinia a lot and it is going to be a hot race.”

The Grand Prix of Sardinia is going to be crucial for Cairoli for a couple of reasons, one being that he has to close in on Gajser. The opening moto at the Grand Prix of Afyon was one of the best rides of his career. The unfortunate thing is that, despite that, he still lost points to the current series leader and trails by 29. If he is going to secure a tenth world title, then he has to start getting closer.