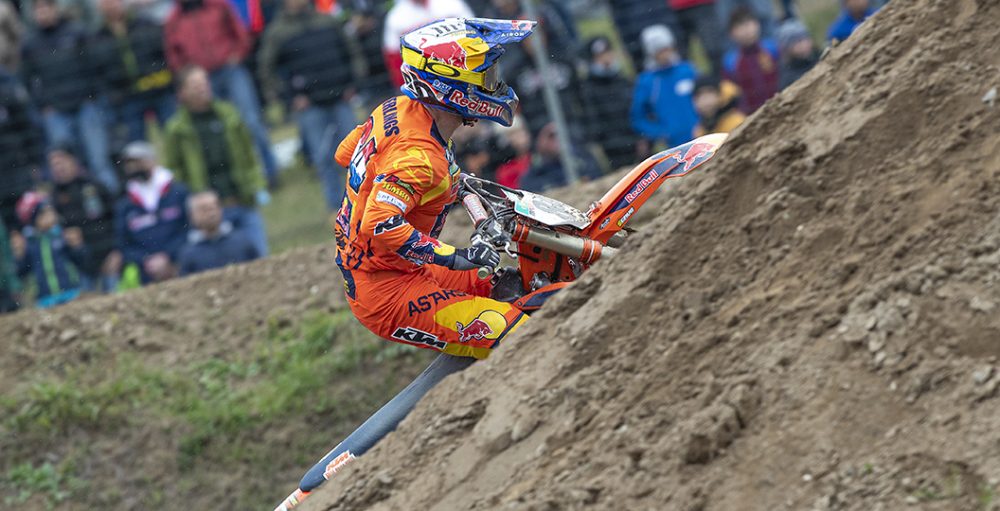 Jeffrey Herlings ran into countless interruptions in the two seasons prior to the 2021 FIM Motocross World Championship, all of which were well documented. Herlings raced at eleven events in twenty-four months. Amazingly, the most recent campaign was just as chaotic and yet he still took his fifth crown. Herlings was so brilliant that a shoulder injury and crashed-induced bike problem could not stop him from claiming gold.

Herlings encountered many bizarre moments across eighteen rounds; Ivo Monticelli landed on him at Oss, he raced to second overall with a broken shoulder blade at Lommel, he fell from the sky in an incident with Jorge Prado at Teutschenthal, a broken throttle left him without points at Pietramurata and he survived a monstrous crash at the same track. The fact that he still romped to the title is a testament to just how good he is.

The way that he rode at Mantova, the track that hosted the final two stops of the series, put an exclamation point on that. Although Herlings did not sweep those races, he was clearly the best. There was nothing that anyone could do to stop him. Romain Febvre tried everything to pull that off and put in a valiant effort, but it just was not enough. Febvre was so good that it would be hard to pinpoint what more he could have done. Herlings was just unstoppable.

The daunting thing about facing Herlings is that he always has more in the tank – he unlocks that whenever necessary. Look at the first moto at the Grand Prix of Citta di Mantova as an example of that. Herlings was lurking in third, moved into first in one lap and then went a couple of seconds quicker than his closest rivals on the very next lap. Having such an ability is an ideal way to crush the soul of those trying to give chase.

This is actually an interesting point to dive into. Was there a change in strategy from one Mantova stop to the next? Herlings set his best times on laps thirteen and eight at the Grand Prix of Lombardia, whereas it was laps five and four where he was at his best at the Grand Prix of Citta di Mantova. Dropping the hammer fairly early is obviously crucial for track position, as well as from a mental perspective. Why not try to break his rivals at the beginning of the race?

Sprinting so early could have been a move to combat arm pump as well, something that Herlings admittedly suffers with. Other riders in the paddock are very aware that Herlings opts to do a ‘heater’ early in free practice to try and eliminate that ailment at the start of the day. Strategy was a crucial portion of the two-man duel for the championship and perhaps underplayed in the hours prior to gates dropping. It really was an all-out war in every way imaginable.

In fact, that is a brilliant way to describe the entire fight for the 2021 MXGP title. It is quite easy to forget now, seeing as so much has gone on in the last two months, but competing at the Grand Prix of Flanders-Belgium was really the key moment in the 2021 FIM Motocross World Championship. It was just ludicrous. Heck, it was not even confirmed that he would take to the track until late on Saturday evening! It was a last-minute decision and one that shaped his title jaunt.

It also brought notoriety to the campaign. Racing with a broken shoulder blade was such a bonkers decision and something that only a couple of guys would opt to do, so interest flooded in from further afield. It was a story that those who are not hardcore fans of the FIM Motocross World Championship could latch onto. Could this rider really overcome a fifty-point deficit in the most stacked field in history? It was the ultimate storyline and the catalyst to the greatest season ever, a season where the best man ultimately won.