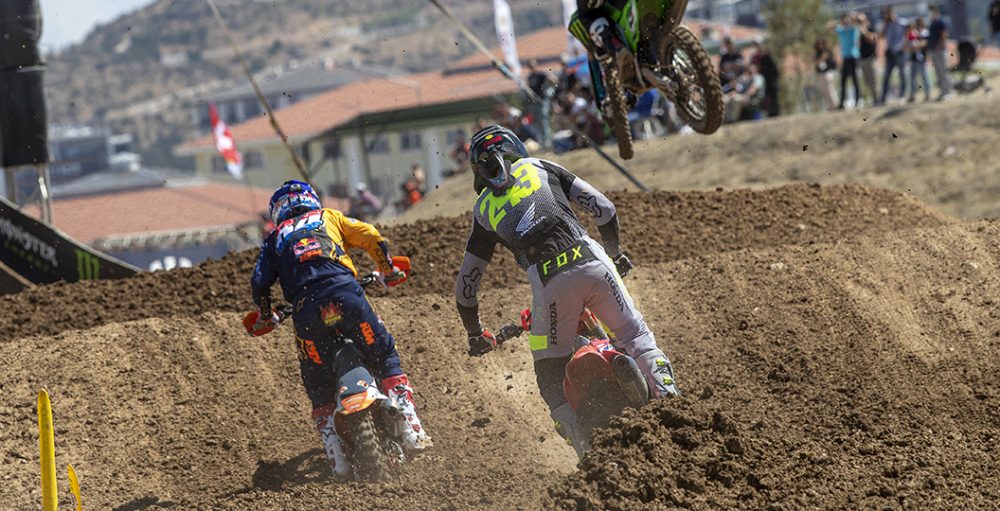 The 2021 FIM Motocross World Championship continues to deliver and provide some intriguing subplots, as it’s become apparent that Tim Gajser broke his collarbone since the previous Grand Prix at Afyonkarahisar. Surgery was performed fairly quickly and he has even had a chance to ride since – he will race at this weekend’s Grand Prix of Sardegna.

Now, racing so soon after a collarbone break is not too uncommon. A lot of different guys have done it in the past and enjoyed some success. This will be particularly tough for Gajser, however, as the field is so deep. The level’s undoubtedly higher than it has ever been before and the setting for this weekend’s race, Riola Sardo, is arguably the toughest of the year. Many riders have argued that the sandy circuit is even more treacherous than Lommel.

It’s very hush-hush around the Team HRC pit. Exact details about the extent of his injury and whatnot are unlikely to emerge until after the event. HRC even released a pre-event press release that did not reference an injury or hiccup at all – Gajser simply stated that he was excited to go racing. The sand is not his strong point anyway, of course, so it will be interesting to see what he can do and how he manages to limit the damage.

28 points is his advantage entering the Grand Prix of Sardegna, which is a significant margin. Even with such an injury, which should not be downplayed, it is still fairly unlikely that a rider will rip the red plate from his grasp. The pressure is on riders like Jeffrey Herlings and Jorge Prado, known sand specialists, to maximise this opportunity and gain significant ground. Watch this space.

Gajser isn’t down to compete for Team Slovenia at next weekend’s Motocross of Nations, so the weekend off will do wonders for him. It is likely that he will be at 100% by the time that the Grand Prix contingent reconvene at the historic circuit of Teutschenthal on October 03.