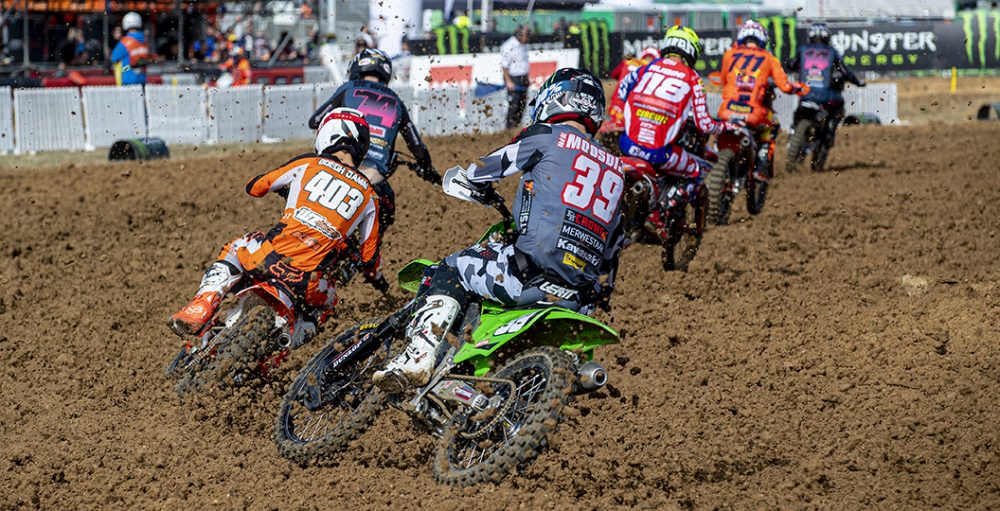 Unsurprisingly, Roan van de Moosdijk has withdrawn from the remaining five rounds of the 2021 FIM Motocross World Championship. Moosdijk, who broke his scaphoid at the Czech Grand Prix in July, has struggled with the ailment ever since returning and was even forced to retire from moto two at last weekend’s Grand Prix of Spain. Following orders from his doctor, he is going to focus on resting up now and turn his attention to the 2022 FIM Motocross World Championship.

The decision was announced via the official Kawasaki Racing communication below. Current rumours suggest that Moosdijk is not going to jump onto a KX250 again. Moosdijk actually fared better at the start of this term than  Kawasaki’s words even indicate, as he was within five points of the red plate after moto one at the Grand Prix of The Netherlands in July. The lack of podium finishes causes some to doubt his prowess when fully fit.

Forced to retire last week in Spain with a painful wrist Roan van de Moosdijk must unfortunately to end his season and will miss the remaining rounds of the 2021 FIM Motocross World Championship. After a highly successful rookie season in 2020 with five Grand Prix podiums during his first full MX2 campaign, the 2019 European champion confirmed his potential earlier this season as he placed his F&H Kawasaki in the top five of the MX2 World Championship after the MXGP of Netherlands. Posting consistent top six finishes, including several moto podiums, Roan was building his season at each race until he was injured during the second moto at Loket in the Czech Republic at the end of July, where he broke his scaphoid and had to go for surgery.

It was the first time in his career that the young Dutchman had faced a serious injury and, with the aim of representing his country at the Motocross of Nations in Italy, Roan was back on his Kawasaki just six weeks later, racing in Sardinia to prepare for the MXoN where he helped Team Netherlands to the FIM silver medal as runners-up to the hosts. After further top ten scoreline in both Germany and France he had to withdraw from the first moto in Spain last weekend as he had too much pain in his wrist. Following further medical examinations this week the renowned sports specialist Doctor Claes has recommended that Roan cease training and racing for a couple of weeks so that his wrist can recover completely.

Roan van de Moosdijk: “It’s definitely not the way I wanted to end this season, but these things happen. After a solid start to the 2021 season we were battling for the top spots in the championship after a couple of rounds but unfortunately, as everyone knows by now, I had a big crash at Loket and broke my scaphoid. We knew up front that this is a tough injury but I did everything I could to be back on the bike as soon as possible and to fight for my country at the MXoN where we came second. With the busy schedule on the MXGP calendar there was no chance to rest my hand and I couldn’t ride without pain during the week or at the weekends; my doctor has advised me to let it heal now and to focus on the new season. I want to say a big thank you to the whole F&H Kawasaki MX2 Racing Team, Kawasaki Motors Europe, my mechanics, my trainer Marc de Reuver and all the sponsors for all the hard work and belief in me.”

Nathalie Fase (F&H Kawasaki team manager): “It’s a disappointment that Roan has sadly had to cut short his season, but injuries are unfortunately part-and-parcel of our sport. The entire F&H Racing Team wishes Roan a full and speedy recovery so he can start to focus on next season.”