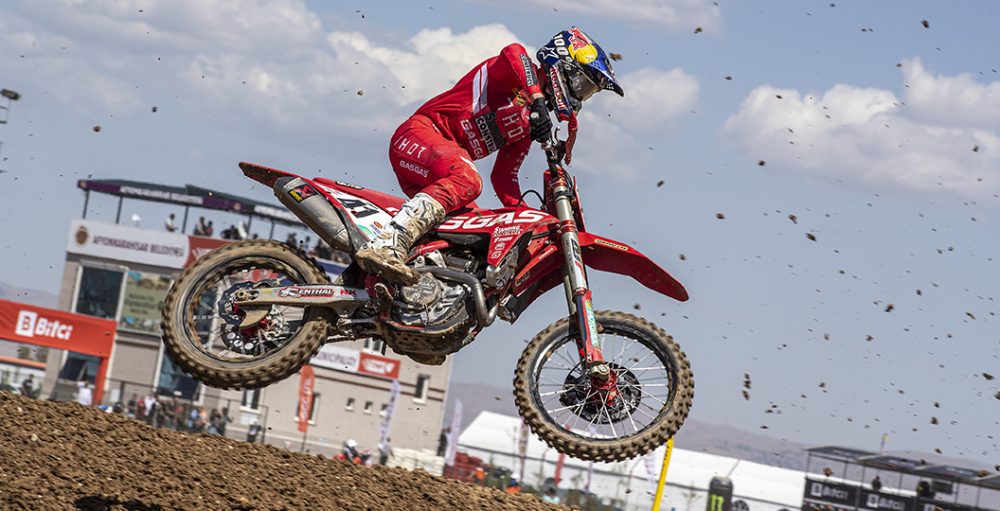 Pauls Jonass was unbelievable in moto one at the Grand Prix of Turkey, round eight of the 2021 FIM Motocross World Championship, as he had the fastest time aboard his Standing Construct GASGAS Factory Racing steed and raced to third place, despite ending lap one in sixth. There were so many positives for him to extract from the 30-minute stint. The second moto was unbelievable for all of the wrong reasons, unfortunately, as he flew over the berm at the end of turn two and landed on the concrete. Fortunately, he is okay.

“It was a frustrating end to the day after such a good first moto. During the break in the calendar I improved my fitness even more as well as my speed on the bike and I really felt like that showed in race one. Fortunately, I’m ok after my big crash in race two. It was a wild one and I landed on asphalt, which is never good. Luckily, I just have some really bad bruising, so I’ll be back for more on Wednesday. I’ve no doubts about what I can do and I’m excited to be racing again in a few days.”

Jonass does not have too much time to recover, as the Grand Prix contingent are in the midst of the first double header of the current campaign. The next round of the 2021 FIM Motocross World Championship, round nine, is going to be held at the same Afyonkarahisar venue on Wednesday. Jonass is sat in seventh in the premier class standings now, 34 points behind Jeremy Seewer in sixth place. The DNF in moto two meant that he lost points to Glenn Coldenhoff, in eighth, and is only three points up on him.