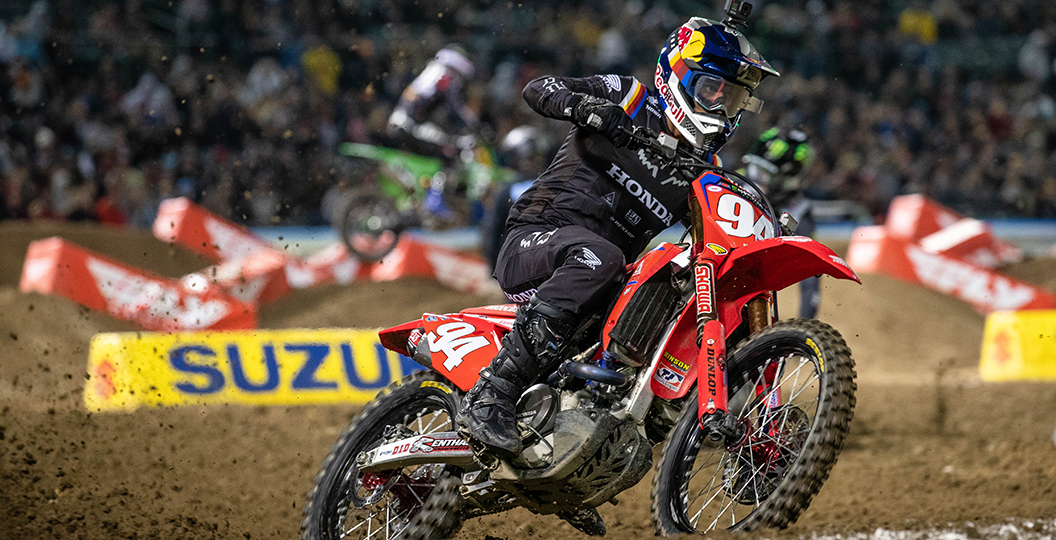 Ken Roczen is ready to race this weekend, as mentioned previously, and even took to the track that has been constructed in Petco Park on press day today. That gave the MX Vice team the perfect opportunity to learn more about his foot injury and how it is going to have an impact on him at round six of 2020 Monster Energy Supercross, if at all.

“Well, the good thing is was it was not actually my ankle joint-wise. It was my mid-foot. I could have gotten x-rays there on Saturday night, but I was not worried about it. Yes, I was a stinger. It was not like… I have had enough broken bones to know when something is really wrong. On Sunday morning I could not walk at all. It was really bad. It kind of shocked me – that was when I was stressing. I was like, ‘Dang, maybe I do need to go and get an x-rays?’ I did that on Monday. Luckily, already until then it went much better really quick.

“I got x-rays done though, just in case, and there were no broken bones, which was good. I did a lot of physical therapy and actually got to ride once this week, which was huge. I did not think I would be able to. It was big. It was scary there for a quick second, just because we are in a good spot and still am. I rode once so kept my finesse feeling really well. I am glad to be here with the green light and everything.

“Especially on Wednesday, for example, I was taking it easy in some spots like right-hand turns, just because I did not want to aggravate it again and dig a deeper hole. I just wanted to make sure I did not hurt it even more. Right now, I am sure I will still feel it a little bit but I have ridden with pain before. Once the race comes around we will just deal with it.”

Ken Roczen underwent x-rays on Monday but everyone kept fairly tight-lipped after that, which was obviously concerning. The Honda HRC outfit have finally confirmed that he is actually okay after that hit from Cooper Webb in Oakland, CA, and will be able to race this weekend. Roczen even managed to ride today (Wednesday) with no pain.

“Team Honda HRC’s @KenRoczen94 is ready to rock for San Diego! He had his right foot checked out on Monday following the Oakland SX and was given the green light that there was no serious damage. He’s been doing therapy throughout the week to alleviate swelling and pain. He rode today and was feeling great! Let’s keep the momentum going.”

Ken Roczen may not have won the fifth round of 2020 Monster Energy Supercross in Oakland, California, but he was still right in the thick of all of the drama. Roczen led thirteen laps, ultimately gave up the lead to Eli Tomac and then lost the runner-up spot to Cooper Webb in the final turn. The battle between Roczen and Webb involved some contact – nothing that one would consider dirty – and ultimately left #94 in some pain immediately following the finish line. The television cameras captured his agony, but he confirmed in the post-race press conference that there is nothing to worry about.

“I don’t think it is anything crazy. It is just my foot. I don’t know if it got stuck in something or if it was just from the hit. It was a bit of a stinger, but nothing too crazy and nothing that I’m worried about.” 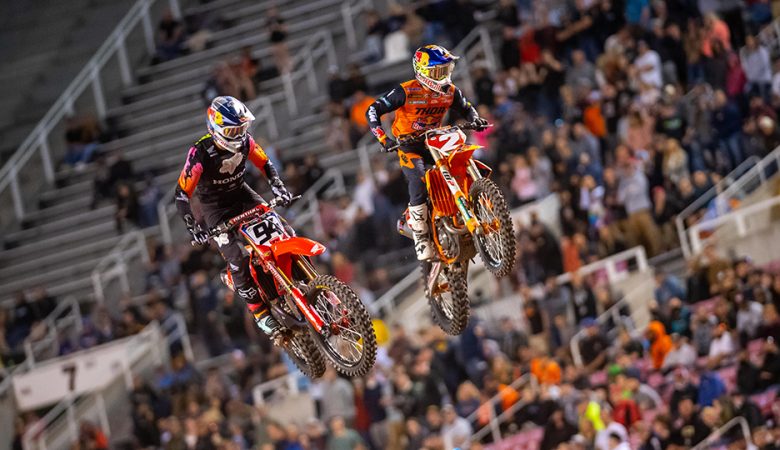