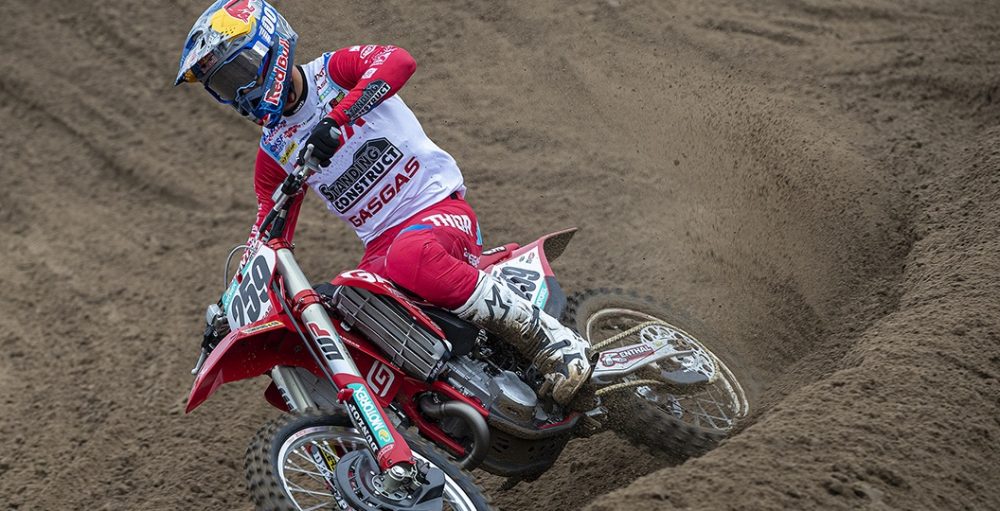 Updates on Glenn Coldenhoff, following a scary crash at the thirteenth round of the 2020 FIM Motocross World Championship, can be found below. This post will be updated regularly.

Glenn Coldenhoff’s spoken out about his injury for the first time, by releasing the following social media statement. Coldenhoff did lose feeling in his arms to begin with, hence why the situation was handled with such care at the track. Great work from all involved.

“One tiny mistake can have some big consequences. Unfortunately it’s part of our sport. Lost the feeling in my arms the first moments after my crash, but luckily it came back again after several minutes. We got everything checked here in Herentals and it turned out I have two compression fractures in my back (vertebrae T3/T4). Sad to say this season is over, as I felt stronger than ever. I will keep my head up and focus on my recovery from now. I have been here before and I know what to do to come back to the form I had. I am looking with confident [sic] towards the future and I can’t wait to be behind the gate again. Thanks to the medical crew on track. They handled the situation really professional and took great care of me. Also thanks to Toon Claes, and his team in Herentals, and of course my team, family, friends and everyone for the messages and support.”

There are no major developments to report with Glenn Coldenhoff, but an official update from GASGAS Factory Racing has shed more light on the injuries that were suffered. Initial reports suggested that Coldenhoff fractured two vertebrae, but it turns out three are injured. More below.

“Glenn Coldenhoff was absent from racing at round 13 of the FIM Motocross World Championship following a crash during timed practice. Falling heavily, the Dutchman was quickly transferred to a local hospital, where he remains overnight ahead of further examinations tomorrow. Thankfully experiencing no loss of sensation or movement in either his arms or legs, Glenn was diagnosed with compression fractures to three vertebrae.”

Glenn Coldenhoff had a scary crash in timed qualifying at the Monster Energy MXGP of Flanders and was laying in the track for some time, whilst medical crew gave him the attention he required. Rumours have been running rampant since he was taken away to a local hospital, but Standing Construct GASGAS Factory Racing just released the following statement.

“For all Glenn Coldenhoff fans: What we currently know is he has a fracture in two vertebrae but has feeling in arms and legs. He is currently being transferred to the hospital in Herentals. Huge thanks to the medical team in Lommel. They did an incredibly good job.”

This post will be updated as soon as more becomes available.