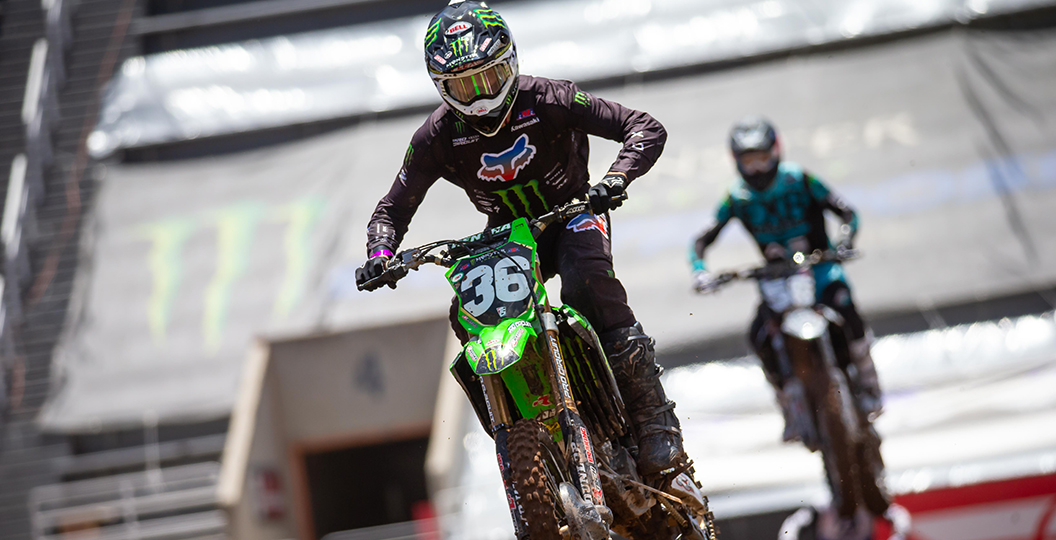 Things have gone from bad to worse for Monster Energy Pro Circuit Kawasaki, as it has now been revealed that Garrett Marchbanks will miss the whole of the 2020 Lucas Oil Pro Motocross series. The injuries that Marchbanks sustained at SLC 3 are much worse than first thought, as he explains.

“I’m so gutted to announce that I will be sitting out the rest of the season due to a crash that took place during round 13. I ended up lacerating my liver, bruising my lungs, I also tore my MCL and PCL which will require surgery this Friday and will be about a five month healing process. I would like to take this time to thank all of my sponsors and a special heartfelt thanks to Mitch Payton and the entire Pro Circuit team for this opportunity and for all the endless support. I look forward to lining up at the gate again soon.”

Although he missed the final two rounds of 250SX East, Marchbanks did still secure fourth in the championship standings. That is quite the improvement over his tenth in 250SX West during his rookie season.

It is hardly surprising, but Monster Energy Pro Circuit Kawasaki’s Garrett Marchbanks will miss the remainder of the 2020 Monster Energy Supercross series. Marchbanks crashed the last time that the 250SX East riders took to the track and bruised his lung – the decision has now been made to return at the opening round of Lucas Oil Pro Motocross in Indiana in July.

“After crashing at round 13 @PCRaceTeam rider @GMarchbanks36 and the team have decided to concentrate on his recovery process and forgo the remainder of the supercross season. Marchbanks suffered a bruised lung and other internal injuries. The Utah native is looking ahead to a full recovery and the start of the AMA Pro Motocross Championship.”

Marchbanks currently sits third in the 250SX East points, but is in danger of dropping outside of the top five by the end of the term. A career-first victory at Daytona in May was his season-best finish.