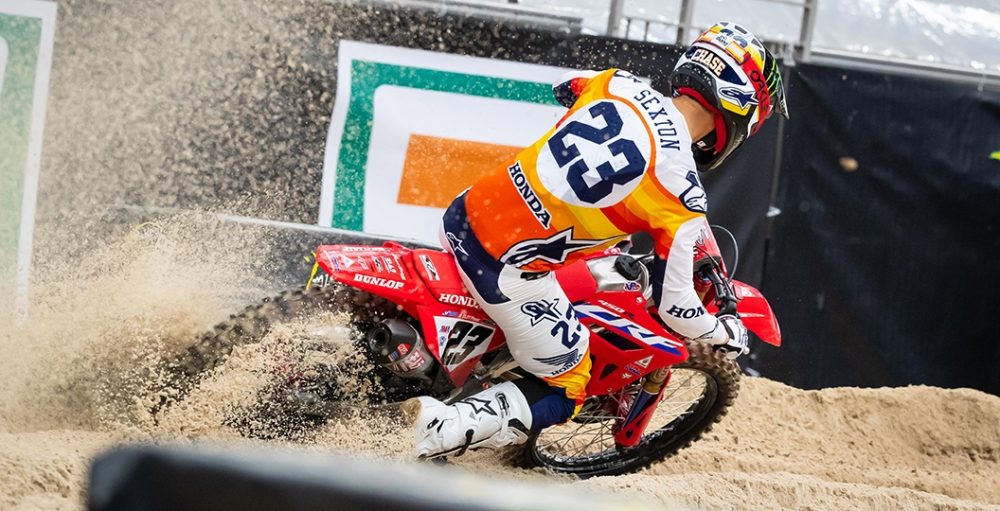 Unfortunately, Chase Sexton will not race at round three of 2021 Monster Energy Supercross this weekend. The good news, however, is that he should be in Indianapolis next weekend. Sexton’s statement is below.

“It kills me to say I won’t be lining up Saturday for the third round of @SupercrossLIVE due to my crash Tuesday night. I’ve been having problems with my right shoulder being weak and limited range of motion. Getting MRI done tomorrow back in Florida to see if there is any damage done internally. Hoping to be back next weekend at 100% for Indianapolis. Thank you for the support.”

Chase Sexton had one of the scariest crashes in recent memory during the 450SX main event at the second round of 2021 Monster Energy Supercross, and had fans worried about his condition as he limped off holding his wrist. Sexton has just released an update on his condition though and, thankfully, it does not seem as though there is too much to worry about. His status for the third round, Houston 3, on Saturday night is yet to be confirmed though.

“Went from a dream night to a disaster in a split second. I felt so good last night and especially in the main, I was locked in and was very comfortable with the track until the crash. Thanks for everyone checking in and seeing how I am but, as of right now, my right shoulder is pretty banged up. Just waiting for further evaluations but hoping it’s just deep bruising! I’ll keep everyone updated as soon as I know more!”

Sexton has now completed two rounds in the premier division and experienced many ups and downs along the way. The Honda HRC star started off with the fastest qualifying time at round one, then won a heat race at round two. Crashes have hindered his progress aside from that – his speed cannot be questioned though.