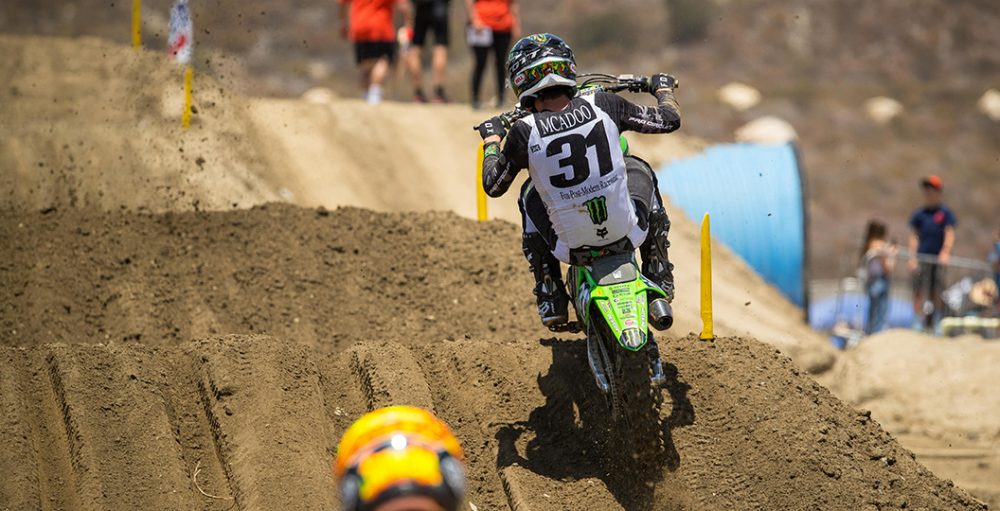 Bad news from Monster Energy Pro Circuit Kawasaki’s Cameron McAdoo, as his 2021 Lucas Oil Pro Motocross campaign has drawn to a premature end. McAdoo confirmed on social media earlier this morning that his tibia is fractured, something that was done via strain on his ACL. McAdoo’s statement can be found below.

“This is definitely not the news I would like to have, and very hard to accept as there is so much work put in to prepare for the season as a rider and team collectively. Unfortunately on Saturday in moto two I came together with another rider and ended up landing with my knee straight out. I knew right away that something wasn’t right. I got the results back today and my ACL pulled and fractured the top of my tibia bone off. I will be getting it fixed next week and begin the process of working to get back healthy. Thank you all for the support through the good and bad. We’ll be back.”

Monster Energy Pro Circuit Kawasaki will be represented by Austin Forkner, Jo Shimoda and Seth Hammaker at Thunder Valley. The fifth rider on the team, Jordon Smith, is already out for the summer.

Cameron McAdoo appeared to have yet another hard crash in the second moto at round one of 2021 Lucas Oil Pro Motocross, Fox Raceway, as he was last seen getting loaded into the back of a mule. It was quite obvious that he was dealing with pain in his leg, but there is still no official word on the damage sustained (if any). Kawasaki did release the following statement from McAdoo, which makes it sound as though he will be able to race at Thunder Valley on Saturday.

“I’m disappointed with how things went today. I was really looking forward to starting the season strong and felt prepared after the extra few weeks following supercross, so this was a hard pill to swallow. I hurt my leg and it started giving me problems early into moto two, so I will need to get it checked out before we head to Colorado.”

Bizarrely, that statement hints that McAdoo injured the knee before he crashed alongside pit lane rather than in the crash itself. A fifteenth in 250MX moto one at Fox Raceway left McAdoo with six points to his name, so he currently sits twentieth in the championship standings. If he does indeed race round two on Saturday, which is yet to be determined, there is no doubt that he will not quite be at full fitness.