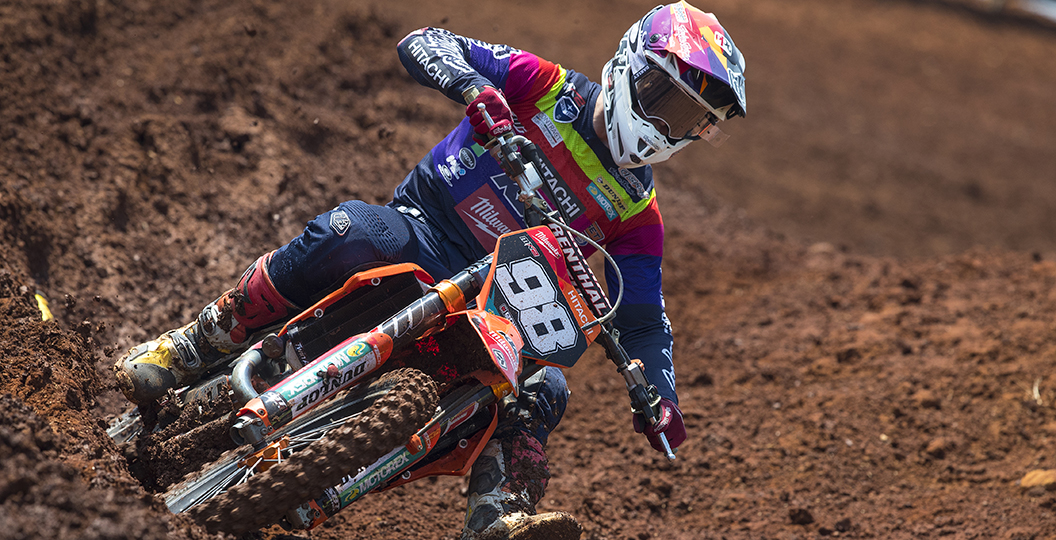 Following on from the scary incident that Bas Vaessen encountered in moto two at the Grand Prix of Asia, Hitachi KTM fuelled by Milwaukee’s Roger Magee has released the following statement.

“Bas struggled in the MX2 qualifying race on Saturday and the first moto on Sunday after picking up a slight knee injury last weekend in Palembang. This, however, was totally eclipsed with what happened in turn one in the second moto when he was involved in a high speed crash after [Thomas] Olsen had gone down just in front of him, and he couldn’t avoid the stricken factory Husqvarna. He didn’t have any feeling below the shoulders for some minutes after the crash, but thankfully the feelings in his legs returned and he was able to walk back to the paddock without assistance.

“In the hours that passed after the incident, he had some tingling in his upper body but, thankfully, that has now receded as well. Once he returns to Holland tomorrow, he will undergo full medical examinations and tests to determine any injuries that he may have incurred. Many thanks to the medical staff at the circuit and our team members Ian and Vaclav for dealing with the traumatic situation and offering all the care and support required for Bas.“

A scary crash at the start of MX2 qualifying race claimed Thomas Kjer Olsen and Bas Vaessen. Vaessen appeared to get the worst end of the stick, unfortunately, as he was down for quite some time and with good reason too. ’98’ shared this worrying social-media post after the event, explaining the issues that stopped him from continuing and climbing to his feet at first.

“After struggling all weekend with my knee, I ran into the back of a bike in the start crash second moto. [I] had no feeling from the neck down for 4 minutes and that was really scary… Feeling in my legs is back now and also slowly coming back in my arms now. When we get back in Holland I’ll do a full check up.”

It is incredibly positive that there is some good news there, as things could have obviously gone in the other direction. Bas Vaessen is now eleventh in the championship standings, thanks to the eight points that were gained via a thirteenth in moto one.