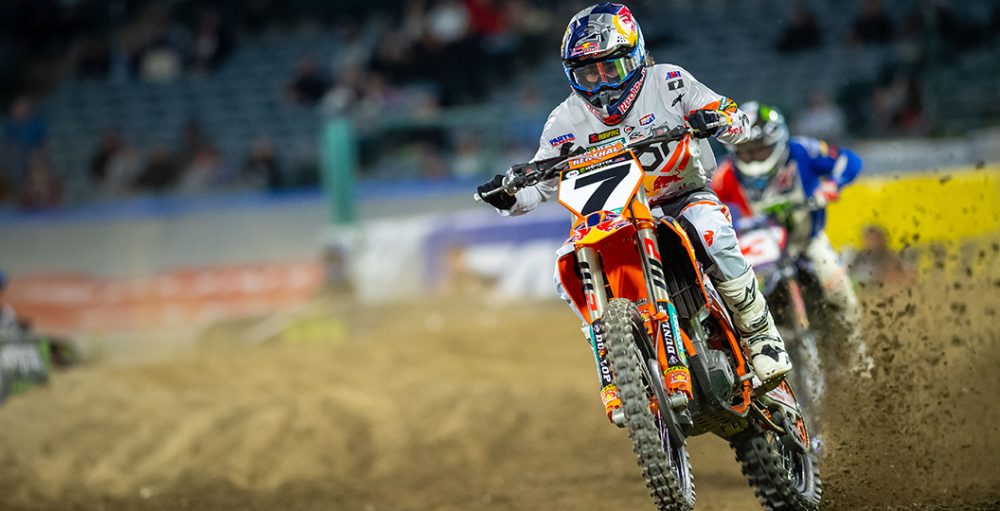 There was so much chaos in the 450SX main event at the fourth round of 2022 Monster Energy Supercross, especially early on, that few people noticed that Aaron Plessinger disappeared from the race in the opening laps. Unfortunately, Plessinger got wayward in the sand section and catapulted onto the concrete. His wrist took a lot of the impact and was cause for concern in the minutes following the incident – Red Bull KTM Factory Racing confirmed that no injuries were sustained though.

“I actually started off pretty good. I felt really good on the bike, had the best qualifying and just felt the most comfortable I have so far. After a solid heat race, I was en route to having a really great night but I didn’t get the greatest jump on the start of the main and it kind of all went downhill from there. I was in the back battling and then I tried to go for one of the outside passes and ended up smashing a hay bale and landed on the ground. It ended the night for me but nothing is broken or injured too bad, so we’ll be back and ready to rumble in Phoenix.”

The crash was certainly untimely, as Plessinger had a phenomenal ride in his heat race and narrowly missed out on the victory. The fact that he only secured a single point in the 450SX main event caused him to slip to tenth in the championship standings – he was sixth going into Anaheim 2. 30 points separate him from the current leader and round four winner, Eli Tomac. Plessinger has already recorded one podium in Red Bull KTM Factory Racing colours; a second in Oakland was a season-best finish.