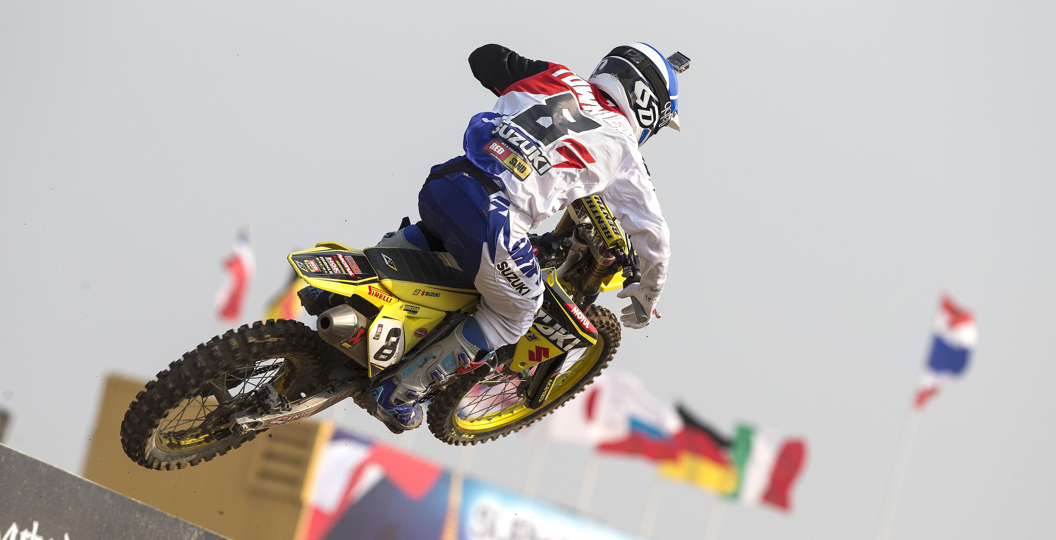 Team Suzuki World MXGP has secured its first Pole Position of the 2016 FIM MXGP World Championship after Ben Townley made an excellent start to a hot and steamy Qualification Heat at Suphan Buri and led every lap on the way to first choice in the gate for tomorrow’s Grand Prix of Thailand, round two of 18 in the current campaign.

Townley, who was ninth and then fourth fastest in the Free and Timed Practice sessions in temperatures touching the 40-degree mark, resisted the assaults of Tony Cairoli and Romain Febvre around the flat layout north of Bangkok to win by over three seconds from the reigning World Champion. The 30 year old used his works RM-Z450 to blast through the hard-pack and deep, rutted and rough sections of the layout and kept an impressive pace to front the field in challenging conditions.

Kevin Strijbos felt signs of improvement with some set-up changes on his race-bike but was handicapped in the Qualification sprint by a bought of arm-pump that limited his speed and potential. The Belgian circulated to sixth, around five seconds behind Qatar GP winner Tim Gajser and three in front of Max Nagl.

In MX2 Jeremy Seewer came unstuck in the Qualification race and was one of several who fell victim to the track watering that created slippery and slick conditions. “I felt really good today but it was shame the waves section after the start had been watered too much,” he said. “A lot of riders went down and I just managed to save it from being a big one.” The Swiss ended the first lap in sixteenth but rode well to come back to fifth place.

Ben Townley: “I got a good start and I said to the guys in the team that if I made that then I’m confident of running at the front with the others. I’m happy with how it went and I knew stepping onto the track that the difficult ruts would be ideal for me and it turned out that way. We have been working on pretty much every aspect of the bike and it is still work-in-progress but we are in better shape this week.”

Kevin Strijbos: “I’m disappointed and have a strange feeling. The arm-pump problem is still there despite having an operation and making a lot of improvements to the bike. My start was not great in the heat race but I felt OK running with the others until about the fourth lap when my arms went. I just couldn’t hold on that well and wasn’t doing any of the big jumps. I will look to have a good warm-up tomorrow and then tweak the bike a bit more with the engine and maybe fork as well; we can improve with that. I usually take corners in second gear and we tried in third but then it wasn’t working for me and the bike was too aggressive back in second. We’ll look at the engine again and make the power a bit smoother. I want to ride how I usually do and then we’ll hope for the best.”