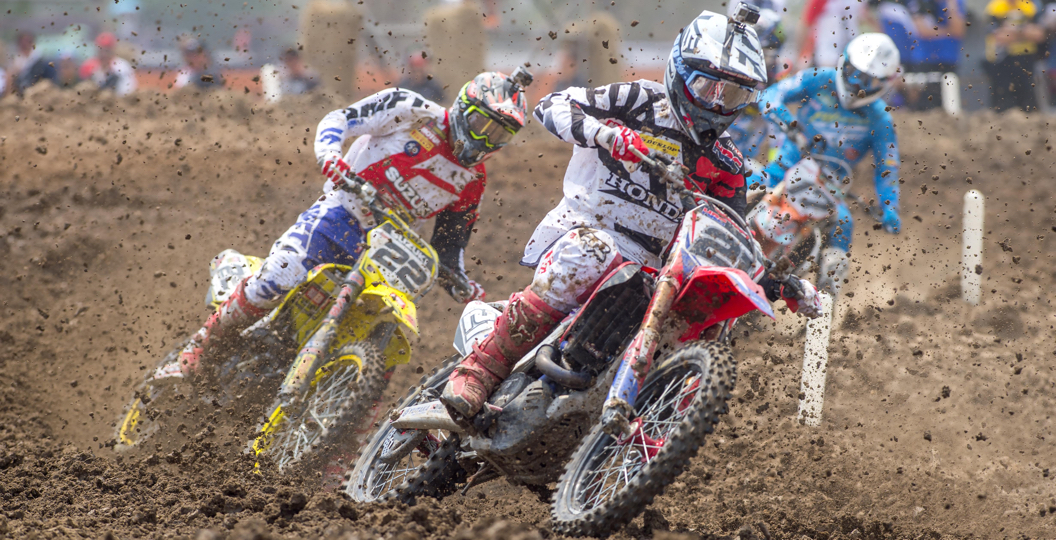 Team HRC’s pairing of Evgeny Bobryshev and Gautier Paulin endured a frustrating MXGP of Thailand, with Bobby just missing out on an overall podium by two points, and Gautier’s race two assault being derailed when his bike was hit on the opening lap.

As the temperature at the Suphanburi Motorsport Land venue soared to 37 degrees Celsius, with an oppressive humidity of 58 per cent, there was a lot of Honda red at the front of the pack at the start of race one.

Honda Gariboldi’s Tim Gajser on the HRC factory machine slotted into second, whilst Bobryshev and Paulin were embroiled in the pack and emerged in 8th and 14th respectively, but it was Japanese Kei Yamamoto on the CRF450R who took his first holeshot. The Team HRC duo faired well in the heat and fought through the pack valiantly, Bobby climbing to an eventual fourth and Gautier, who was the fastest man on track in the closing stages of the race, took the flag in seventh.

Race two was almost a reversal of positions with Bobby exiting turn one in tenth but Gautier sitting strongly in fourth. However, frustration came again for the Frenchman when Valentin Guillod’s bike got out of shape in front of him exiting the last corner, and as the rear snapped back into line it cleaned out the front wheel of his Honda CRF and put him on the ground.

A seventh place for Bobryshev meant that he missed the podium by just two points, finishing fourth overall in the Grand Prix, whilst Paulin recovered to ninth but was let ruing what could have been.

Evgeny Bobryshev: “For me until now it was the hardest race. The weather and the track were both very tough. I couldn’t get well with the track and I was struggling in the corners and couldn’t flow my speed. The track was less rutted today than yesterday though, so the guys at the track and the organisers made a good job with the work they did overnight. The first race was ok and I stayed in fourth so I’m happy with that. But still I struggled a little and couldn’t push myself too hard. I had a bad start in the second race and had to come back from ninth but when I got behind Simpson I couldn’t push hard enough to pass him. Compared to one year ago when we were last in Thailand I am different though. I handle the heat better and changed my style a bit, working a lot over winter, and I think that people can see that too. It was a hot weekend for us, but also for my mechanics who had some heavy work this weekend so I’d like to thank them too for the great job they’re doing.”

Gautier Paulin: “This weekend hasn’t been easy because of the track and the heat, but that’s motocross and it’s what we love. In the second race I had a good start and I was improving every session on this track. At the end of the first lap Guillod had a big slide from left to right and once he got back the grip, his bike went straight into my front wheel and I couldn’t do anything – I just lost my bike and was ejected. I wasn’t his fault, it’s just racing. The scary thing was being on the floor and with the dust not being able to see what was coming. But after that we got back on the bike and did some good few laps, passing people like Antonio and Strijbos and pushing well to the end.

“Again we keep on working. It’s a long way until the end of the championship but I feel more and more that I’m in the rhythm. Just our two weekends so far something has happened to slow us down so it’s a little frustrating, but we just need to keep looking forward. If I was leading the moto I wouldn’t have a problem with other riders, so we just need to keep pushing. I’m putting in so much effort and so is the team, so things like this are frustrating, but I know where I’m at, I keep a good mind, and we move on to the next round.”

Roger Harvey: “It’s been a frustrating weekend here in Thailand. Bobby was strong all weekend – he’s usually been weak in the heat but he turned it round this year with a very strong. He just missed the podium, but that’s how it is. Gautier was in the middle of everything all weekend, and just as he was making headway in the second race he was cleaned out and went down, so that’s also very frustrating. Tim delivered a great ride, especially considering the situation he was in one year ago in Thailand last time. Another podium and second in the championship isn’t half bad for a rookie!”