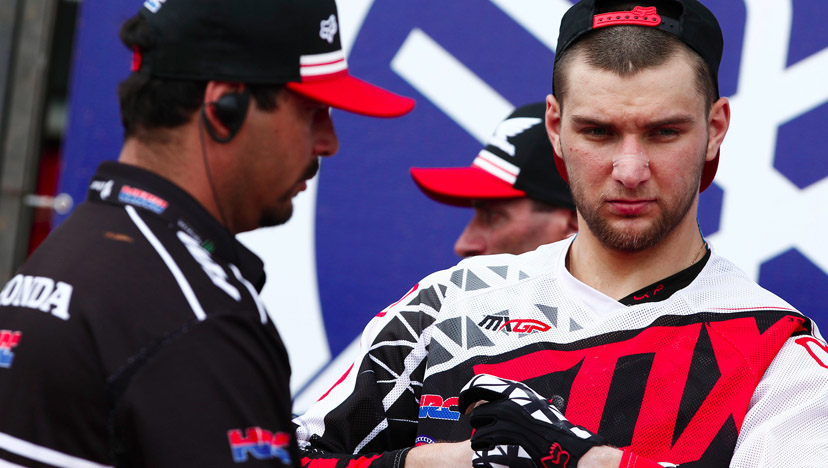 Amidst northern Italy’s picturesque mountainous backdrop, Trentino plays host to round four of the FIM Motocross World Championship as the paddock heads to the Arco di Trento track this weekend. It represents the start of the European portion of the season.

The hard-pack and rocky track made its MXGP debut only last year during the 2013 season and was immediately a great hit with the passionate Italian crowd.

Owing to the provenance of Team HRC and the workshop’s location in Italy, it’s also the closest the team will get this season to a home Grand Prix.

After a victory in the season-opener on his CRF450RW, Max Nagl has relished in his early season form and fitness to be at the sharp end of the standings after the opening trio of races. He’s strongly positioned as the championship returns to the harder compound tracks.

Continuing his recovery after surgery to his ankle on 12 March, Evgeny Bobryshev is feeling stronger and more comfortable and has been able to return to the training routine that he had to abandon before the Brazilian GP two weeks ago.

Team HRC started a two-day test in Italy yesterday with both Max and Bobby that will be concluded later today. HRC engineers were present at the pre-GP test as work focused on fine-tuning areas of the Honda CRF450RWs highlighted after analysing the data and testing new parts.

The weather forecast is for highs of 20 degrees Celsius, scattered showers and low humidity; a relief certainly from the 30+ degree temperatures that were commonplace in the last two rounds.

Max Nagl: It’s nice to be now travelling in Europe now and not having to go so far – the first three races were tough with all the travel. Last year Arco was a track that I really liked – it’s still sort of a natural track but there are many German spectators coming for the race as it’s close to the border so I’ve a lot of support. As long as it stays dry it’s harder than the last races. We’re testing at the moment on hard-pack so we’re really well prepared and I like the hard tracks. The test is going well too, so I’m feeling good.

Evgeny Bobryshev: I had to take a week without training after Brazil to rest my ankle as it was sore after the race, but I’m now able to cycle and get back in the gym again, and on Sunday I was back on the bike at about 70 per cent. I’m still on painkillers, but I feel more comfortable with the ankle now than I did before Brazil so this is good. The Arco track is rocky and slippery so it’s hard to be aggressive and pass –there’s no traction off-line and little mistakes can cost you a lot. Our test this week is really positive though and we made more of a step-up and improved the bike again, so overall I’m feeling more comfortable.

Roger Harvey: Trentino marks the start of the European season, and it’s a beautiful venue but because it’s in the mountains it can be quite inclement sometimes. Both Max and Bobby have been training and on the bike since Brazil, which is a good indication that Bobby’s ankle is recovering well. We’ve been testing for the last two days in Italy, and completed work on a number of areas of the bike so we’re hoping to have a little more this weekend. The test was on a hard-pack surface which will help for Trentino, although it will be a bit more rocky at the Grand Prix.