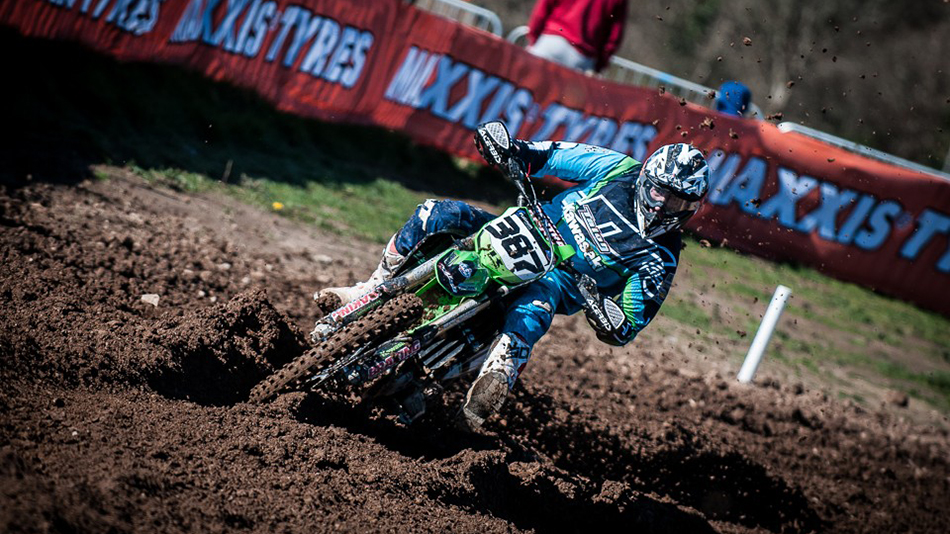 Landrake, in Cornwall, was the setting for round one of the Maxxis British Championship and the first event for the full Talon Kawasaki team. Yentel Martens and Dorren Coutts contested the MX1 class for the squad, but both came into the race with their own issues.

Yentel had a big crash in Belgium whilst practicing, which resulted in a broken thumb and a tweaked MCL in his knee, which was the one that was operated on in 2013. Dorren was riding his bike for just the fifth time since August last year, after returning from shoulder surgery at the end of January.

So, damage limitation was the name of the game for Talon Kawasaki this past weekend. Yentel wanted to ride, despite the fact that he was in extreme pain. It was always going to be difficult for him to not only hang on, but to also stay safe on the deep rutted track that claimed a Talon Kawasaki rider last year! For Dorren it was all about race time and getting some race fitness on his side.

From a results point of view, it was obviously a disappointing day. But, from a team point of view, we had both riders out there, when we could have quite easily pulled out of round one at the beginning of the week. It’s a testament to both riders that their desire to race outweighs the pain and lack of bike time.

In the last race Yentel showed a glimpse of what he is capable of by coming through and getting stronger from thirtieth to twentieth and grabbing a single point.

The team has a break now, so Yentel can heal up and get ready for Lyng, and Dorren can go to Culham (the opening round of the MX Nationals) to get some valuable bike time.

Rob Boseley Team Manager: “With Yentel’s injuries, we had lowered our expectations this weekend. It’s difficult for us coming off of a ninth overall at Hawkstone, as everybody expected us to be there again at Landrake. Yentel wanted to ride and get some points and that’s what he achieved, but he obviously was not happy with the result. Dorren will get there; he just needs some more time on the bike. He feels good and for once is in no pain from his shoulder, I fully expect Dorren to be all guns blazing at round two!”