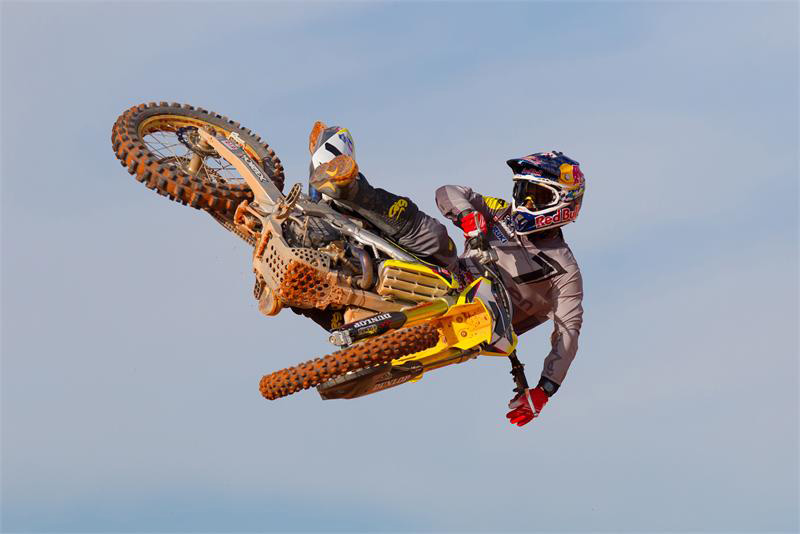 It’s almost time. In just a couple of days over in sunny Southern California, the eyes of the motocross world will be on the Anaheim Angel Stadium to see just who will win the biggest Supercross race of the year. A1 is Christmas day for motocross fans!

We know all about the consistency of Chad Reed and Ryan Dungey.  The aggression and ability to perform under pressure of defending champion Ryan Villopoto. We know about the comeback stories of for race winners Trey Canard and Josh Hill.

So, for this article, I look at maybe the two biggest question marks and maybe the two most exciting riders that will line up at the gate on Saturday night, they are both at the opposite ends of the experience spectrum but both are equally unpredictable – the rookie Justin Barcia and the insanely fast but strangely erratic former champion James Stewart.

The wildcard is the wild child, but Factory Honda’s Justin Barcia is primed and ready for his first season in 450 supercross.

He has won two titles on the 250f, and crucially he beat Dungey at the Nations in Lommel. He took that confidence to the Monster Energy Cup where he won, beating Chad Reed, Ryan Dungey and Ryan Villopoto (who crashed out).

That victory will be huge for his confidence coming into round one- he knows his speed is right there and he will want to make an impact right away.

Barcia will not be intimidated, he will ride over his head to get the win as we witnessed firsthand at Lommel and he will put people on the ground. It is these qualities that make Justin so exciting to watch – you never know what is going to happen.

Barcia isn’t going there to get top five in his first season, he thinks he can win races and that is what he will be trying everything to do.

Justin is reminiscent of Damon Bradshaw, he will try to win in at all costs, he super aggressive,  the other riders don’t like racing him because they feel he doesn’t respect them and, just like Bradshaw, Barcia just doesn’t care because he just wants to win.

Barcia is the most exciting element added to this year Supercross and it is a mouth watering prospect to see him go up against Reed, Stewart and the two Ryans. How will they react to his aggression and his sometimes erratic style? Will they give him a taste of his own medicine and put him on the ground, or will that play into Barcia’s hands because he is making them worry about him?

Barcia could be the villain or maybe even the hero by the end of the season, but he won’t go unnoticed and that is what makes his arrival in the class in 2013 so exciting!

This could be a make or break season for the former supercross champion. He struggled on the Yamaha the last couple of season with injuries and even more crashes that prevented him from seriously challenging for the title.

Chad Reed said last season he was glad James signed with Yamaha and not Suzuki, but for 2013 Stewart is on the bike that Reed didn’t want him on!

Stewart looks more at home on the yellow machine and this year he has no excuses, it won’t be the fault of the bike and he already has experience with working with his new team from the outdoor series.

The question still remains though – can James Stewart stay off the ground enough to take the title? As we saw in the outdoor nationals, James can win, no-one explodes out of turns like he does and he looks super comfortable on the Suzuki but yet again, Stewart crashed out and lost his chance of the championship – even when he looked extremely comfortable.

The most worrying statistic is that Stewart has never competed a full season of Supercross and outdoor races in the big bike class. That is a stat that he needs to get rid of this season.

Things have changed for Stewart in the last few years, he is no longer a level ahead of the competition and anytime someone is even remotely close to his speed James panics and usually crashes.

Stewart has to mentally accept that other people will be close to his speed now, he may not even be the most aggressive rider on the track with Justin Barcia in the mix but when Stewart puts it all together he can still win, and this year I expect him to be faster than he has in recent seasons.

He will have to be, because this season will be the toughest in years and none of the top guys are intimidated by Stewart anymore and neither will newcomer Barcia. They all believe they are the best and they they think they can win the championship!

Stewart has lost his aura of being, ‘the fastest man on the planet’ and, it remains to be seen if he will ever get that tag back. Right now Stewart has to mentally accept that there will be three or four guys capable of running his speed over the course of the season, if he can accept that and enjoy his riding again, then Stewart could very well win this title.

If he can’t, questions will start being asked, that in his late 20s, with new riders coming in every year, will James Stewart ever be as good as he once was?

Like every other time in his career Stewart has no option – he has to win, but it seems it is more crucial this season than any other for his career!

Both of these riders have so much to prove at A1 – Barcia wants to show he is the new kid on the block and Stewart wants his place back as number one supercross rider in the world!

With all this motivation and the two most aggressive riders in the class, who wants to see a battle for the win between these two on Saturday night?! Yes please!