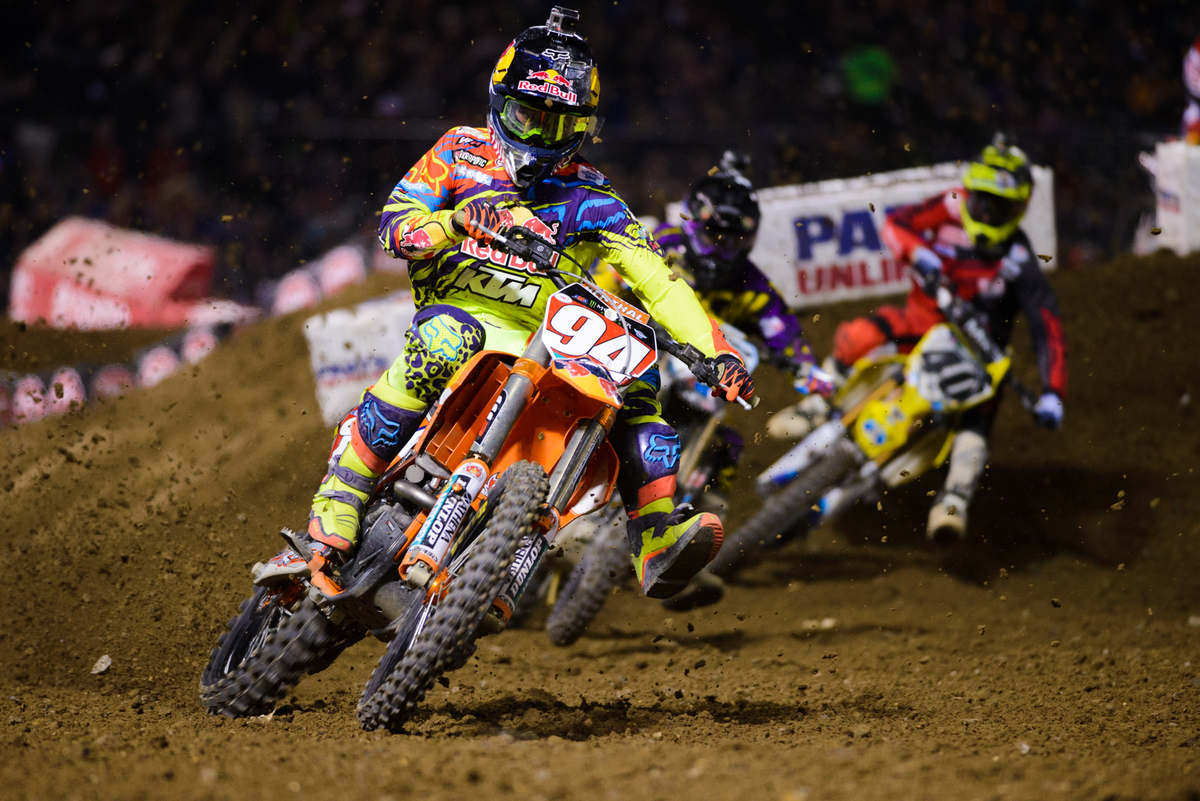 Ken Roczen, Ryan Dungey and Jeffrey Herlings have all something in common this season – and it isn’t the fact they all ride for KTM.

It is that they have all hired full time trainers for the first time in their careers.

Ken Roczen had always worked with his father but now that he is in the 450 class, he decided he needed some more expertise to challenge for a supercross and outdoor championship, especially with the gruelling schedule.

Roczen has been living off natural talent and riding intelligence for his entire pro career while doing enough fitness to see him through. But, after struggling in the heat of the outdoor nationals in America, Roczen realised that he needed to have his fitness on a par with his competition.

The German then hired the best in the business, Aldon Baker, to put him through his paces. And while it may be a stretch to say he is enjoying it, Roczen is showing he has the dedication and will to do what it takes to win.

However this didn’t go down well with his father who had been Ken’s training advisor his whole career. But it is something that Ken saw as necessary to win and hopefully their relationship in the long term won’t be affected.

Just like Roczen, Jeffrey Herlings has finally seen the light as well. Herlings, like Roczen, was living off of an insane amount of talent, and while Herlings rode a lot and did train alone, he didn’t have a structure.

Stefan Everts recently said that Herlings had all the on-bike talent to become one of the greatest ever, but unless he developed a structure in his life away from the track he wouldn’t achieve that potential.

So this year Herlings has bitten the bullet and got himself a trainer and a structure around his weekdays. It is a smart move by Herlings to get the first year of a full time trainer under his belt in his final year of MX2 before he moves up to race Cairoli.

This way they can work the bugs out and build a good base for the MXGP season that will undoubtedly come in 2015. Herlings of course has been injured and unable to ride recently,  so having someone in his corner will have kept him motivated and focusing on his recovery.

A trainer will keep Herlings motivated throughout the season if he ends up dominating again because he knows the ultimate goal this year is to prepare himself enough so he can go for the MXGP title straight away in 2015.

After some ups and downs it seems Herlings has matured into a man and his focus is now on being one of the all time greats.

Ryan Dungey has always trained alone and won four  AMA national championships doing so.  But after seeing Ryan Villopoto run off into the distance last season, Dungey knew he had to make changes in order to win another major title.

So this season he has sought the expertise of Robb Beams who is measuring every detail of Ryan’s fitness. Dungey was always fit and prided himself on being self-motivated, but this move may be more to help Ryan know that mentally he has left no stone un-turned and to make sure he is training smart and not just hard.

Dungey can now line up on the gate knowing he isn’t missing anything and he is fully prepared with a trainer in his corner just like his great rival Villopoto.

It seems all three riders have bowed to the pressure of getting a trainer but all have done it for slightly different reasons.

Roczen has done so he can compete with the top 450 riders throughout a grelling supercross and motocross season. He knows he has the talent to win but Roczen isn’t just relying on talent alone anymore.

Herlings has never really had fitness issues and is dedicated but it seems he has done it so he can have more structure in his life. Ultimately he hopes this new direction will lead to a long successful career. He knows the mistakes he made this year that led to big crashes, seemingly due to a lack of focus cannot keep continuing, especially when he moves to MXGP.

Ryan Dungey also has never had fitness issues before so it seems to be more of a mental adjustment to find that extra per cent he needs to win another championship.

It just shows how difficult it is to win and keep winning. All three guys are champions at the highest level but all three guys are still looking to improve and be better. If you stand still in motocross you get left behind and it is a credit to the ambition of Herlings, Roczen and Dungey that they are willing to sacrifice more in order to win even more.