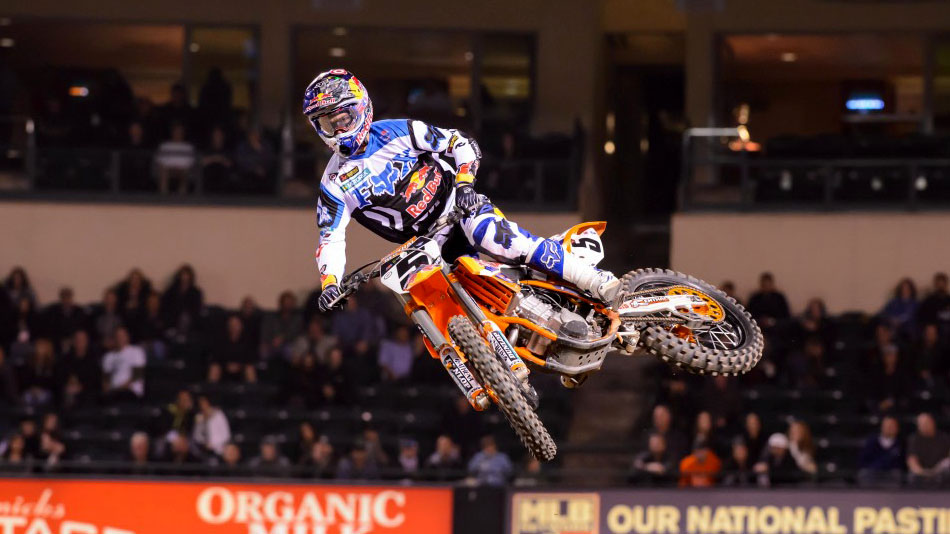 Ryan Villopoto might ultimately still be the man to beat in supercross but it seems his rivals no longer see him as unbeatable.

In just three supercross weekends the rest of the title challengers have re-found their ‘I can win’ confidence and RV has only been on the box once after crashing in two of the three races.

Ironically, despite passing everyone to win at Phoenix, that may have been the moment that everyone saw that Villopoto was beatable. And they have Justin Brayton to thank for that.

Brayton lead most of the race in Phoenix but when RV passed him for the lead everyone expected the reigning championship to pull away. But he didn’t.

In fact Brayton followed RV, figured out where he was faster, and was right on his back wheel as they crossed the finish. The rest of the favourites realised that if Brayton can do it, so can they.

Then on Saturday night Brayton went one better and held Villopoto off to win the heat race even passing RV back to do it. Brayton showed how much believing in yourself improves your performances and gave everyone that belief.

So finally at A2 Dungey got aggressive. He knocked Tickle down in the heat then hit Josh Hill in the final turn to get into the main. He nailed the holehot in the main and was keeping a good gap over Stewart until he went down. That crash may have made Dungey question his new found aggression but in the last turn he went for a pass on RV and put them both down. Dungey would never have made that move before but it seems his mentality has changed.

RV always knew that was where he had the edge on Dungey, but when RV looked back after the finish line to look for Dungey you could see that he was a bit shocked and unhappy – he just did not expect that from Ryan Dungey.

Something has changed in Dungey and RV knows it. Phoenix seemed to be the tipping point and RV knows he has a different Dungey to contend with this season. The advantage he had on him might just be gone.

Then you have the amazing Chad Reed back on form. Reed was the last guy to really challenge RV in speed but that was back in 2012 before his knee injury. Reed though seems to have that feeling back and Chad is one of the mentally strongest riders out there.

The biggest change however is Ken Roczen, the points’ leader. RV perhaps under estimated Roczen when he allowed him to join his training camp and the pass Roczen put on RV in the main showed that Ken is in no way intimidated by him. Roczen rides with RV every week, he doesn’t see Villopoto as a better rider, Ken knows he has the talent to beat him. And after that pass RV may just be wondering why he gave Ken the keys to unlocking the secrets of creating a supercross champion.

James Stewart’s confidence must surely be on the rise. Despite having a cold Stewart almost won at A2 and you get the sense that he is desperate to feel 100% because he sees he can win again – because everyone else is winning, especially his old rival Reed.

Of course in the back of their minds they know they still have to beat RV for the title but they are all lining up to take wins away from the champion and prevent him from getting any momentum rolling.

After his mid-race crash RV surprisingly couldn’t catch and pass Brayton for fourth and he allowed Dungey to get close enough to put him down. Usually RV would have been able to pass and pull away from Brayton leaving Dungey in his wake. But something seems to have changed this season.

This is a great time for supercross but RV will be desperate to start putting his stamp on the series by reeling off a couple of runaway wins in row. He knows the rest are starting to believe they can beat him on any given weekend and wants to set the record straight.

Right now the series is on a pivot point. No one really has the momentum but everyone wants to take it and crucially, they all believe they can win.

It’s supercross parity and it’s brilliant (unless you are Ryan Villopoto).