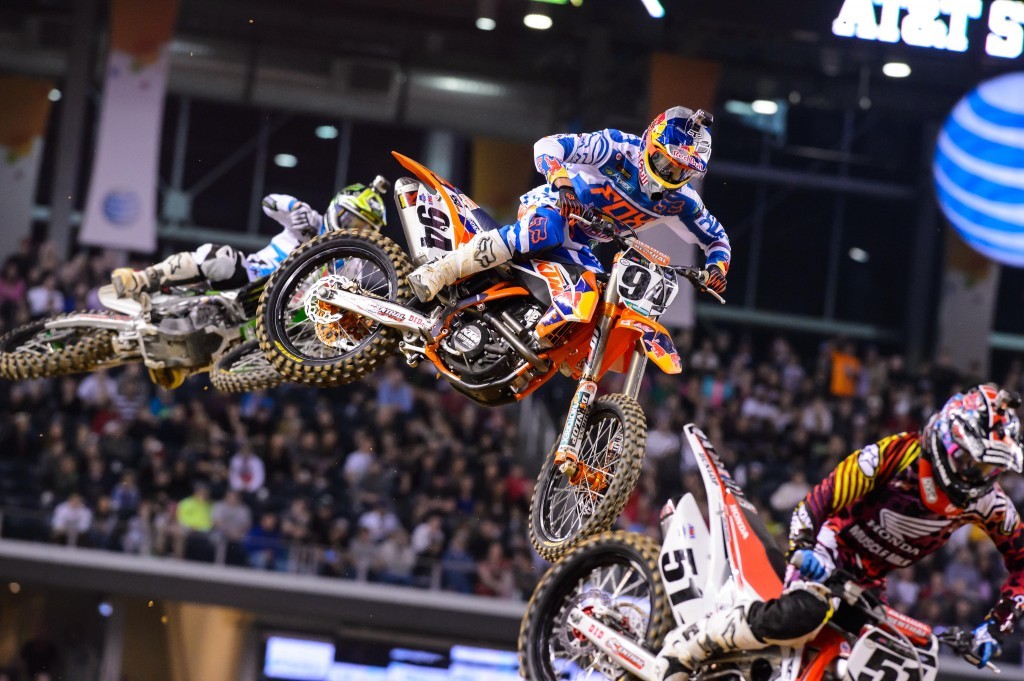 The rivalry just went up a notch!

“I don’t know what the heck is wrong with him. He almost killed us both on the triple. He’s just not the brightest light in the room I have to say.”

That was the damning verdict that an angry and frustrated Ken Roczen had for Justin Barcia. Roczen was livid after Barcia dangerously whipped his Honda right in front of him and almost clipped his front wheel over a triple.

Barcia countered by claiming he whipped it like that every lap and that he didn’t know Roczen was there (despite putting him high in the turn.) Having heard Roczen’s comments, Barcia sarcastically apologised for hurting his feelings and said that’s racing!

Barcia may have forgotten that you could see some of the other times he jumped that jump on TV and not once was the bike remotely whipped like it was with Roczen.

Both passes on the corners were hard but fair, the issue was the whip that followed Barcia putting Roczen high the berm.

You could give Barcia the benefit of the doubt and say that while he did mean to whip it in front of Roczen as if to say, ‘don’t even try.’ He perhaps wasn’t aware Roczen’s front wheel was almost touching his rear wheel. But Barcia definitely was feeling the adrenaline and was putting an exclamation point on the pass.

The battle lines have most certainly been drawn both on the track and off it. These two certainly do not like each other with Roczen seeing Barcia as dangerous and Barcia seeing Roczen as a cry baby when there is any physical contact.

You could argue the difference in cultural with Europeans generally being less aggressive when it comes to passing than Americans. But even the other American riders don’t like Barcia’s style, not even Villopoto, who can ride aggressively himself but always stays the right side of the line.

Barica does not have many friends in USA racing, even the normally mild-mannered Trey Canard and Ryan Dungey have been frustrated victims of Barcia’s over aggressive riding. Dungey, ironically had almost the same thing happened to him when he and Barcia collided in mid-air at Unadilla in Barcia’s 450 debut in the outdoors.

Roczen’s two worst races have both come after contact with Barcia. Despite not crashing this time, Roczen perhaps lost a bit of focus and made a mistake late in the race to drop to sixth, losing more points to Ryan Villopoto in the championship.

Roczen is in a tough position. He is going for a title and can’t afford to get into a knock down drag out battle with Barcia. If Barcia puts him down again Roczen’s title hopes got take a big dive.  But as happened last night when Roczen didn’t totally seal the deal on his pass on Barcia and stuck to the left hand rut, it allowed Barcia to come back in the next turn in anger which led to the whip controversy over the next triple.

Barcia on the other hand has nothing to lose. He is pretty much out of the championship, is frustrated with his season and seems to put more effort into his passes on Roczen than anyone else. Every time he sees Ken near him or attempt to pass him, it seems to ignite a fire.

If Roczen goes in hard with revenge on his mind from Phoenix, Barcia doesn’t see it as getting equal, he sees it as ridiculous that anyone got aggressive on him and they need to be taught a lesson.

Barcia had similar run-ins with Christophe Pourcel until Pourcel finally stood up for himself and gave it back to Barcia. Right now Roczen isn’t quite sure how to handle it and it he sees Barcia in front of him he has to be thinking, ‘Oh no, this could ruin my race.’

Frankly it seems Barcia has the upper hand in the individual battle even though Roczen is winning the war between the two in the championship. Roczen simply doesn’t know how to deal with Barcia without it getting into a slam fest and Barcia trying to put him down.

Just who will get the upper hand in the next confrontation is fascinating because right now it is 2-0 to Barcia, who seems to think he can bully Roczen into submission right now.