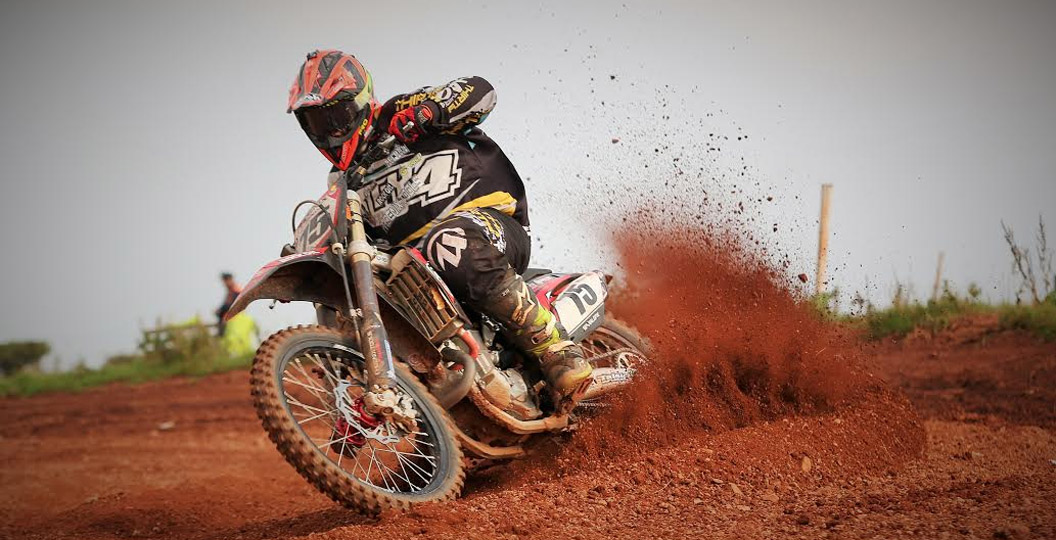 Track preparation, as always, was first class for round 10 of the SWOR Championships and hosted today by the Chard MX club.
Ben Butler, one of Chard’s own, was most definitely the rider in top form today, stealing the limelight with what I can only describe as a top drawer performance.

The Phoenix tools Honda rider was to bag himself a trio of wins the day before at Landrake, riding in the Bill Gribble Memorial race and arrived at Little Silver with a confidence that 2nd place was not on today’s menu. After firmly establishing himself at the front in all three races Butler was virtually unchallenged throughout, this rider even had time to showboat for the camera in race three for which I am most grateful. Lady luck has not always shined kindly on this talented rider, but today luck had nothing to do with today’s performances, 3 races, 3 wins and a very richly deserved headline.

More of the same at Landrake please Ben as it makes the report so much easier to write.

It is also surprising to see just how many riders have improved in my short absence, especially those riders in the Inter 14-16 class. Although James Chard was to win all three races today, it was good to see Gavin Toms hot on his heels and pushing the front man hard throughout.

Toms after an unfortunate slip in race two could only place fourth, but with 2nd spot in the other two,  helped himself to a tally of points much needed to close the gap for the title spot, and lets not forget, this is his rookie year!

Sam Hunt in the Inter 9-13 group was another rider leaving nothing to chance, taking all three race victories in this young and highly competitive class. It really is good to see so many young riders coming into the sport, as these will be the riders we are all talking and writing about in years to come, that much is a certainty.

With so many riders in their respective classes, it is almost impossible to mention you all, as I’d be writing all night. But, it would unfair of me not to mention a few more after such an exhilarating day.

Ian Barnett and Dan Brailey enjoyed some tough racing in the Junior Elite, with Barnett, at least for today,  finishing on top.

Elliot Waldron in the Junior open was the rider to beat here. After winning races one and two, it was only a gutsy performance from Matt Bersey that prevented Waldron  from taking a full house.

Finally the seniors. No one rider was to stand out in the group, with three different winners in each race.
For me though race three did stand out, with riders Luke Parish and Justin Carpenter battling for the front.

Carpenter was to take the hole-shot only for Parish to take the lead after a daring move on the next corner.
Parish remained at the front for the next three or four laps, even if it was only by a few feet from the ever determined Carpenter.

It was then, on the penultimate lap, where Carpenter saw the opportunity and seized it with what must have been  a full throttle pass.

Parish gave chase, but alas on this occasion Carpenter had seemingly done enough to stretch out a lead and win what was a very hard fought and entertaining race.