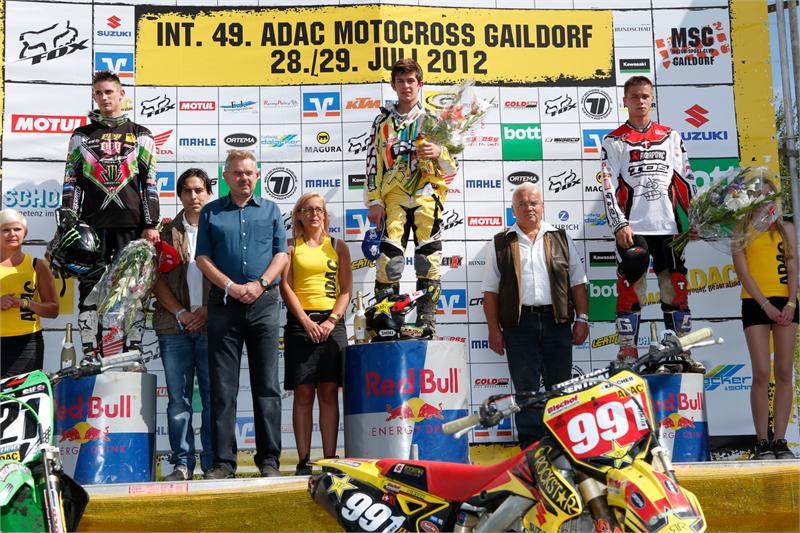 Jeremy Seewer has won the ADAC MX Youngster Cup Championship after racing to two victories at Sunday’s sixth round of the series at Gaildorf in Germany.

The Swiss rider dominated the first moto from start-to-finish despite difficult and muddy conditions at the world-famous and historic Grand Prix venue; sealing the title with a brilliant ride in race two aboard his RM-Z250.

Seewer, who joined the Rockstar Energy Suzuki Europe MX2 team at the last two rounds of the European MX Championship after riders Harri Kullas and Petar Petrov were sidelined with injury, said: “There´s not too much to say about the first moto really. I had a terrific start, rode well and the victory was mine. The following start wasn´t that great, but I was able to get into second place straight away. The rider in front rode a quick pace and I sat there following him, then I made an attack at the end and I took the win.”

In the MX1 class, Silent Sport Suzuki’s Marcus Schiffer extended his lead to 87 points; the 25-year-old RM-Z450 rider racing to two solid fourth places against some top-line Grand Prix and International guest riders including Ken Roczen and Max Nagl. Schiffer raced to two fourth places after riding with his eyes on the Championship title, rather thank taking any risks.

Said Schiffer: “I am fairly satisfied with the weekend, even if I failed to make the podium. I would have preferred to have been battling with Ken Roczen and Max Nagl for the victory, but it was smarter to keep the Championship in mind. Winning the title for Suzuki is my main goal, so I decided to avoid unnecessary risks.”

Rockstar Energy Suzuki Europe’s Jorge Zaragoza returned at Gaildorf after a long lay-off from injury. The Spaniard finished Saturday´s qualifying in eighth place but was forced out of the first race when a stone hit his eye and he had to pull out and the 15 year old did not start race two for safety reasons.

Team Manager Thomas Ramsbacher said: “It was bad luck for Jorge, which is disappointing. Starting the second moto would have been pointless as his eye was swollen and his vision hampered. We played it safe and advised him not to participate. The health of our riders comes first.”

Brian Hsu took victory in the single moto of the ADAC Junior Cup – cut to one race from two after heavy rainfall forced the cancellation of the scheduled opening race. The German-Taiwanese eventually took the race lead and brought home the win against heavy attacks coming from his opposition in the closing stages.

Said Hsu: “The start wasn´t bad but the track was very difficult and demanding. I still managed to get into the lead and take the race win. It was a close affair in the end, but I stayed in front and I am very happy to take the victory. Cancelling the first moto was the right choice, but unfortunately it cost me another chance to make up points in the Championship.”