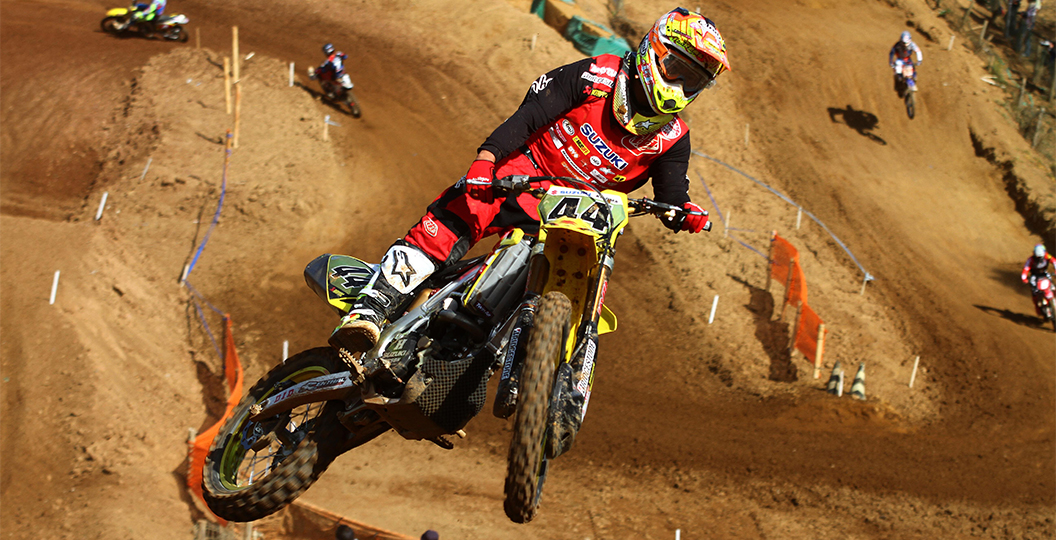 Suzuki’s Yohei Kojima and Yoshitaka Atsuta raced to first and second places in the MFJ All Japan Motocross Championship following Sunday’s 10th and final round at Sportsland SUGO in the Miyagi Prefecture.

It was the first time in five years that the RM-Z has won the coveted title – since Atsuta won in 2010 – and the first time in in 44 years since Kouichi Ueno and Taichi Yoshimura took a Suzuki one-two in 1971.

The series finale, which attracted a strong international entry from the Factory Motocross GP and American series, kicked off on Saturday under mild weather conditions for opening practice and qualifying. Sunday saw a change in conditions, with some rain and strong winds for the riders and 7300 spectators at trackside.

The opening race saw Kojima get a good start on his RM-Z450 completing the opening lap in third position, dropping back slightly but holding fifth place until lap 12. Atsuta chased through the field and caught-up to the leading group, finishing the race just behind Kojima in seventh. This result gave Kojima a six-point lead over Atsuta, who was in turn 10 points clear of the third-placed rider in the series.

Both Kojima and Atsuta had good starts in the final second moto: Kojima was sixth on the opening lap with Atsuta right behind in seventh, but moved up to fifth on lap 2. He dropped a few places in the closing stages but still crossed the line in sixth place. Kojima, however, could only manage 11th position, but this was enough to claim the crown, by just one point from arch rival Atsuta.

Suzuki also claimed success in the IA2 class with Junya Takenaka finishing third overall in the series following his 5-6 finishes in the race.
overall.

Takenaka made a good start in the opening race behind World MX2 Champion Tim Gajser (Honda), battled with American 250 Outdoor Champion Jeremy Martin (Yamaha) mid-race to claim fifth at the flag. In race two, he fought back from a bad start to battle with Gajser once again to finish in sixth position.

Yohei Kojima: “In the second race, there were so many things to deal with in my mind such as not making mistakes, the title and I felt so nervous about my performance, but I kept my eye on the pit signals from my mechanics. It is ten years since I became a member of the Team Suzuki and become the 1A2 champion in the first year, when I had a chance to compete in the World Championship, is a great honour. I owe this to all our team staff and Director, Taichi Yoshimura and my family.”

Yoshitaka Atsuta: “If I had a chance to become champion, I had to go as fast as I could. In heat 1, I wasn’t in the mood for the race, and I was one place behind Yohei and one point behind him. I changed some settings and I decided to attack the second race much harder and I was able to enjoy the race. As a result of this, I am second in the championship by one point, which makes you realise how important just one point is through the season. I have enough energy to challenge and I think I can elevate my skills and challenge for the title next season.”

Junya Takenaka: “I was in a good mood and the first race wasn’t so bad, but I had a bad start in the second and didn’t perform as well as I could have. I try not to make excuses but I couldn’t practice or train a lot because of some injuries. I think I was able to improve the start problem but I have to challenge more and focus on the race. I’m going to get down to it fromtomorrow for the coming season.”

Team Director and 1978 Motocross World 125cc class Champion Akira Watanabe added: “We challenged at the final and we won the title. Nobody knew what would happen until the very end. Kojima lost his control in the first race as he had a bitter experience just missing the title last year. On the other hand, there was potential for a reversal for Atsuta. Despite the rain and some other troubles I think it was a good race for both of the two. Not only the efforts of the whole team led to this result but also we owe our victory to the technical staff, sales staff and the support of all the Suzuki fans. The goal of our team is always to win double title. We have a lot of things to do and we will try to make the machine better for the coming season.”