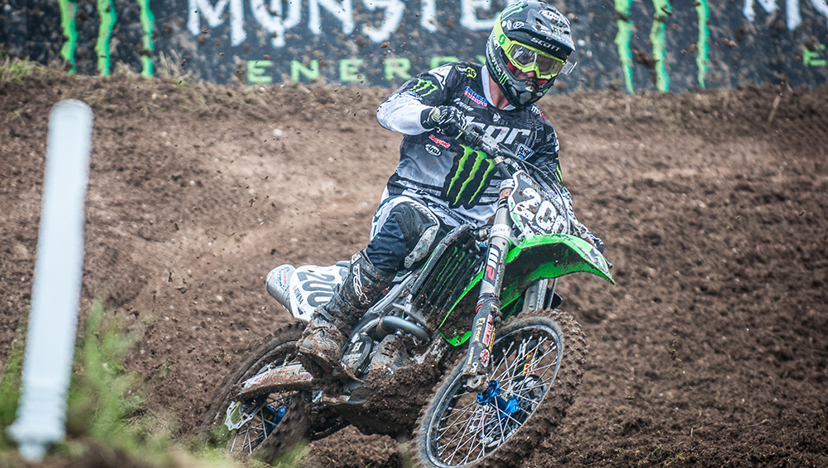 Put simply, it was another brilliant British GP, as there was some superb racing in both classes. But, what did the top guys think of it? Well, find out here, as we have comments from some of the MXGP and MX2 podium finishers:

Antonio Cairoli: “I’ve come off of the worst two weeks that anyone can have, as I lost a member of the family. Especially my father, who was the one that put me on the bike, and was there at every race. I didn’t train at all for two weeks, so this is not good. I was not sleeping for a couple of days, also. This week was much better – I felt good, this is one of my favourite tracks. It got rough, because of the rain, which is even better. I didn’t think it was too different [than last year], at the bottom it is hard, then a lot of ruts develop in the corners.

I was riding good [in moto two], I was pushing. I got closer at the end, then I landed short on the quad. I heard some cracks in my back wheel – I broke some spokes, which were stopping the back brake. I was lucky that there was only four laps to go.”

Clement Desalle: “Yesterday was a perfect day. I started good in the first moto, but then I had a big crash, and hit my head pretty hard on the ground. I was really disappointed about the first moto, because I know I could have done better. I’m really disappointed about this result – we’ll keep working for the next few races. I am positive about the future. It’s a good feeling to win some races, I’m trying to stay focussed on getting good starts.”

Jeremy van Horebeek: “This is one of my favourite tracks, but it didn’t go like I wanted it to go. I struggled all week long, I guess it’s just the one bad day for me. They say you have to do it on your bad days, so I think I did pretty well. I’m looking forward to France – I grew up there, so I know those tracks really well. I think France will be a better weekend for me. On days like this, you just need a good start, but I still feel like a win is around the corner. I think I can win one this year, and maybe more.”

Jeffrey Herlings: “Yeah, I’m really happy. I had to push, but I didn’t have to go over the one-hundred percent limit. I made some mistakes, but I came out on top, which was most important. Two years ago they [the fans] were throwing tomatoes at me, but now they were cheering for me. Great Britain has some of the best fans out there, so it is a pleasure to win here.”

Arnaud Tonus: “The GP was fine. I had the bad start in the first one, and had to work hard to come through. I had a better start in the second moto, and tried to follow Jeffrey for a little bit. [In moto one] Max Anstie changed his gate at the last minute, so I had to take his one, and it really was not a good one, so I didn’t get a good jump.“