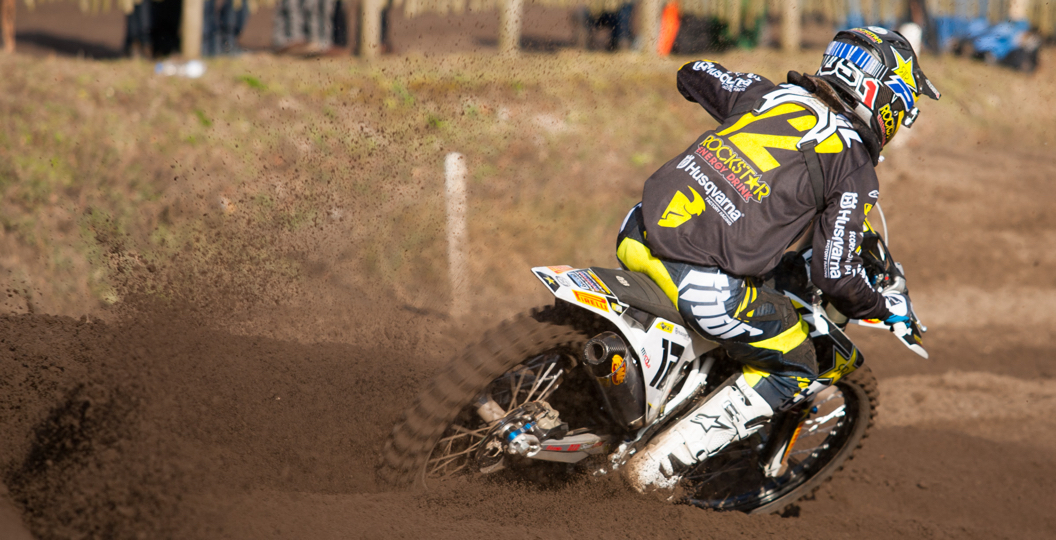 The curtain has raised on what can only be described as an action-packed GP of Europe. Five classes took to the track multiple times throughout the day, which, when combined with the temperamental weather, led to a rugged Eurocircuit.

The MXGP and MX2 qualifying heats were the main attraction, hence why they will act as the focus of this. We’ll start with the former, otherwise known as the premier class. Multiple riders had a stint at the front in that one, and they weren’t necessarily guys who have been in the limelight thus far this season. Max Nagl spent the most time in first, after grabbing the early lead, and admitted that starts were his main focus in the weeks prior to the event.

“Mainly in Qatar and Thailand we had problems with the starts. Normally I’m pretty good on the start, but there it did not go well. We had something wrong on the bike and we just found out what could happen too late. We have changed it and now it works like it should work. I am pretty confident we are good on the starts again, and that is pretty important in the races at the moment. I think tomorrow will be a completely different story, because from what I know they have promised a lot of rain and a lot of wind. It will maybe be a bit of survival tomorrow, we will see.”

Shaun Simpson followed Nagl across the line in second, but wasn’t quite feeling one hundred percent. After alluding to the fact that he felt unwell last week, it has now become apparent that the Scotsman is battling a stomach virus. How much will this affect him in the longer, rougher races tomorrow? Time will tell, but he must be considered one of the favourites if he performs in a similar way to how he did today.

Romain Febvre was third and is the man who I would tip for the win tomorrow. It took him a little while to get going, but he started making progress around the halfway mark and could have perhaps passed Simpson had there been an extra lap or two. Febvre’s times in practice were uninspired, but he is clearly more of a racer.

Another rider that must enter that conversation is Kevin Strijbos, as he looked set to deliver Suzuki World MXGP’s second qualifying heat win in as many rounds before a basic tip over cost him. Although the Belgian got up on the cusp of the top five, he dropped back to seventh at the flag due to arm pump. The crucial thing to consider here, however, is that the speed is there and he is much better than what he was earlier this month. The team made some progress with the engine, which has benefitted him greatly.

Tenth may seem like a mediocre result for Jeremy van Horebeek, but the fashion in which he earned it was quite impressive. After crashing with Tommy Searle on lap one, ‘Jerre’ made great progress to salvage a decent gate pick for tomorrow and also close up on the contenders ahead of him. A second MXGP win could be on the cards for ‘89’ tomorrow, if he can put it together across two motos.

What about Searle? After posting a good practice time he finally rounded turn one inside of the top five and looked set to challenge for a heat win. However, he crashed just three turns later and was the last rider to get going again. Like Jeremy, he showed promise whilst slicing his way through the pack. It is worth noting that the MXGP class features thirty-six riders this weekend, so cutting through the field isn’t as easy it would be at a flyaway event.  I just question whether Tommy can replicate his start from today from the middle of the gate, however, as the fact that he could slide up the inside benefitted him greatly today.

Further down the field you would find Ben Townley in a lowly twenty-first. The result was far from what the Kiwi would have liked, but he too is fighting a virus that is quite evidently holding him back. Salvaging some points will be a goal tomorrow, but even that could be tough based on his showing today. In a team statement, he mentioned that he doesn’t “have any energy and do not feel good at all. I wasn’t actually going to ride today. We’ll see how I feel tomorrow.”

Onto MX2 then and the class that some would be forgiven for renaming ‘the Jeffrey Herlings show’. It took the Dutchman less than a lap to get into the lead and, from that point on, it was over. No one came close, as ‘84’ was lapping two to three seconds faster than his competitions on most laps. This obviously sets him up well for race day, where he is poised to collect a fiftieth GP win.

“I did what people expect me to do and that is win,” said Jeffrey following his win. “There were no points up for grabs today, but it is always good to grab a qualification heat win and it brings even more confidence. I’m looking forward to tomorrow. The fiftieth GP wins is something special. Of course it is also special to maybe win seven in a row, but fifty is a magical number like ten or one hundred. There have only been four guys who have ever passed that, so to make it as the fifth guy is pretty special. It is an honour.”

Behind a gruelling battle ensued, as holeshot-man Aleksandr Tonkov, Pauls Jonass and Brent van Doninck stalked each other for the duration. Well, the latter didn’t exactly make it the whole way as he went missing towards the end; his speed was prominent though. Other notables in the class include Jeremy Seewer, who charged to thirteenth after a first lap crash that also collected Davy Pootjes (nineteenth).

Max Anstie and Brian Bogers were caught up in a different and gnarlier first lap incident, as bikes were sent cartwheeling just moments after the gate drop. Bogers got up and was favouring his shoulder, so withdrew (hence why the timing sheets show that he did not start – he didn’t make it across a single beam). Anstie, on the other hand, took a worrying amount of time to get back on his bike, but he did eventually return to the racing. After a lap he was in pit lane, but whatever issue was restricting him was rectified and he was able to finish the heat. He was handed thirty-third for his efforts, although that will do little to save him when it comes to gate pick.

You may find it odd that the start has been mentioned so much in this, especially when the sand tends to create multiple options. The common consensus from awning-to-awning, however, was that the track was one-lined and difficult to pass on. This makes sense, based on what we witnessed today, and was undoubtedly a big talking point during Rui Goncalves’ meeting with riders like Jeffrey Herlings and Tommy Searle to discuss track prep.

The forecast for today makes for tough reading, as rain, wind and storms are expected all day long. We got off lightly yesterday, however, with just one downpour, so fingers crossed for more of the same.