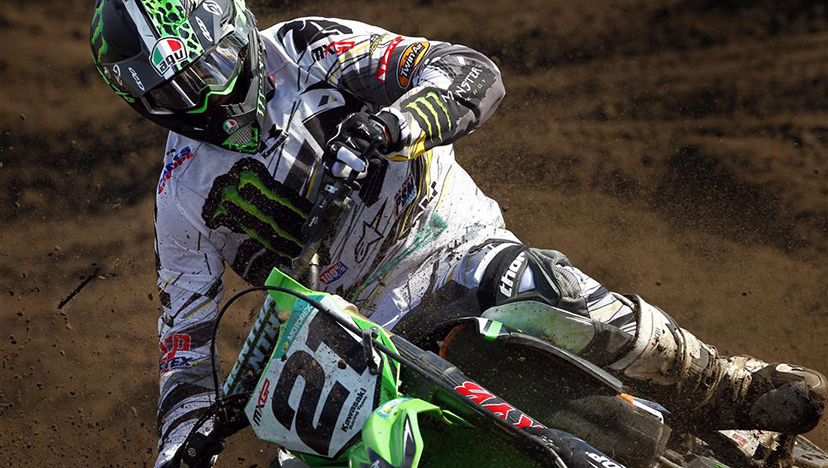 Success and pain for Paulin

Gautier Paulin experienced the sweet taste of success and the agony of injury on one day in the sixth round as he won the first moto and was injured in the second of the Dutch MXGP at Valkenswaard.

The Kawasaki Racing Team leader had taken victories in the first moto at each of the two previous GPs and continued the series as he swept past the defending champion two laps from the end of the opening race in the sixth round of the FIM World MXGP Motocross Championship. With his confidence high the Frenchman was looking for further success in race two, but a first lap fall left him stranded in the track and another rider was unable to avoid hitting him. An examination at a local hospital revealed injuries to his right collarbone and left thumb and Gautier will now return to his own doctors in France for any necessary operation. He remains fourth in the championship standings, but is expected to miss a number of GPs as he recovers from the injuries.KRT teammate Steven Frossard confirmed that he is now recovered from an horrific crash three weeks ago in Italy as he held down a comfortable fourth place for most of the opening moto until a crash in the closing stages cost him six places. He again made a superb start in race two to hold fifth place until the final two laps when he was forced to surrender one place as it became more and more difficult to hold on as he had hurt both wrists in the first moto fall. Steven remains twelfth in the series standings, but is only eight points from seventh.

Gautier Paulin: “Right now I feel disappointed to have had so much bad luck this season. The Fuel issue, then a DNF while leading in Italy and now this injury are things I will have to deal with but I can assure you they do not affect my motivation and my hunger to win. I will be back stronger and more motivated and I know that I have the speed and the condition to win races in all conditions.  My first moto today proved that and so did my wins in Qatar, Italy and Bulgaria. I will see my specialist first thing tomorrow morning in France and then we will take the steps forward from there.”

Steven Frossard: “I had a good feeling this weekend. I have now totally recovered from the crash in Italy and I came here to Holland for ten days to practice again in the sand. My first start was good and, even though I made some small mistakes, I could maintain a good rhythm to secure fourth place until I crashed with four laps to go and damaged the bike. I managed to finish tenth, but after this crash I had pain in my wrists and the second race was more difficult. But I’m pretty happy as I have good speed again, get good starts and feel strong physically; I just had some arm pump in the first moto, and that’s why I crashed.”