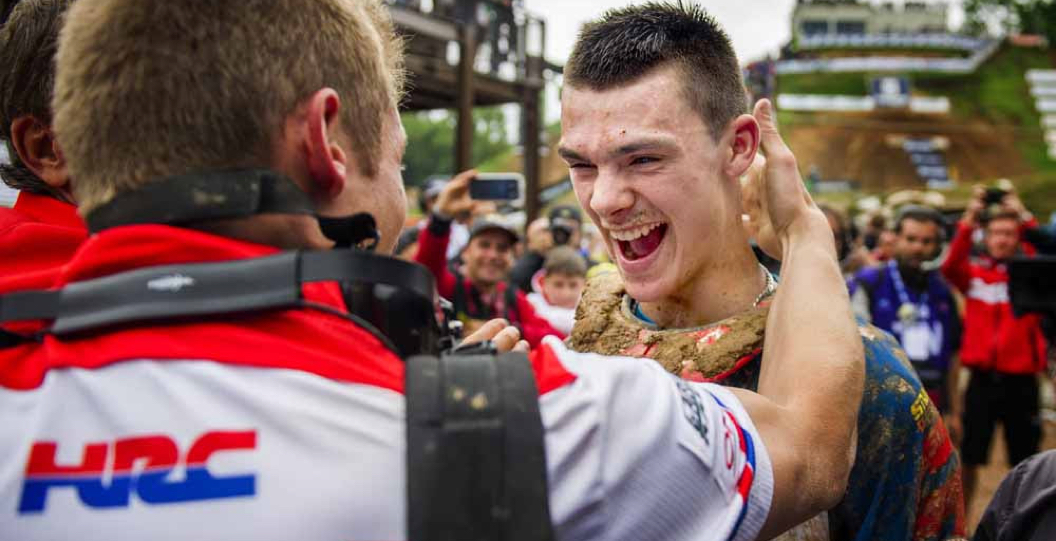 After a morning of torrential rain, race one was an incredibly tricky affair as the track was so wet and muddy and it was a real race of attrition. Gajser crucially got off to a good start and emerged from turn one in fourth. Climbing to third on the opening lap, the top three then pulled clear of the pack. As the race went on and the gaps got larger, it became all about who could keep it on two wheels and avoid those that had crashed.

In race two, again Tim started strongly to move into fourth by the second corner. From there he quickly picked his way into second where he set about chasing leader Jeffrey Herlings, setting what was at the time the fastest lap of the race in the process. With a third and a second from today’s races, Gajser took to the top step of the podium to taste the champagne again at the team’s home round.

Jorge Zaragoza fell foul of the conditions in race one with a first lap crash that ruled him out of race one, but he fought valiantly at a track he’d seen for the first time just yesterday to finish 15th.

“I think Italy brings to Tim and to the team good luck! He made a very good race and rode very cleverly, not making mistakes when it was very easy to do today with the condition of the track. He rode a fantastic GP and he’s confirming that he’s one of the best riders in MX2. Tim is such a nice guy and he really deserves this kind of victory because he works so hard and when he see him win, for everyone it’s double the joy! For Jorge, he’s quite light physically and with this kind of track it requires a lot of strength and at this moment Jorge is not built to last 30 minutes in these conditions. We knew that it would be very tough for him, but it was good that he finished the second race.”

“It feels just amazing to have won another GP, and again in Italy.  I think it’s the right place for me for that! From now we try to continue to work to keep the consistency because now we are again back in the game because we are just 8 points behind second place so evcerything is possible and we just keep working hard to every weekend be on the podium. The track today was really tough. The second race was a little better because in the first it was still muddy and in the second there were already lines, but they were really deep. Both races were not easy for sure. In the first race I was riding with the roll-off and then in the second race it was not raining, so when we went on the sighting lap I decided to take tear-offs. Then on the first corner there was a lot of mess and I used too many tear-offs and I didn’t have enough for the race, so by the end I had to take the goggles off. But I saw on the pit board that Nico gave me if I stayed in my position I would be the winner so I didn’t risk too much after that. Every win is something special, and I’m so happy and for the team too to win again in Italy.”

“Today was really difficult with the mud, and it was very tough for me. In the first race I had a crash and then couldn’t finish, then the second race was a bit better but I had the goggles open so I was still struggling. It was tough because there were a few lines and it was very rough so it was very physical, but I’m happy to have finished the second race and now we look to Germany and continuing to build.”