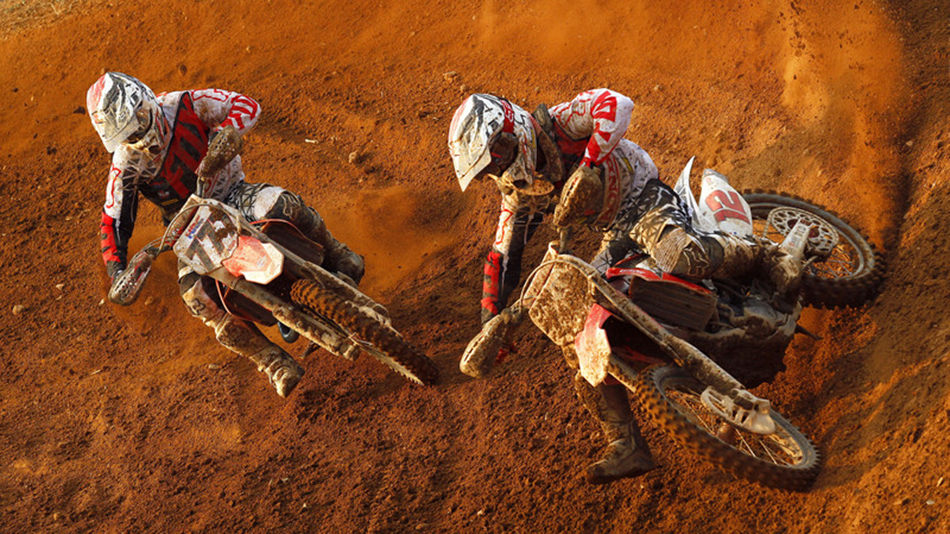 Starting last in the first race, Max Nagl finished a remarkable sixth as he scythed his way through the field. In the second race he made more progress to finish fourth, retaining his second position in the World Championship.

Evgeny Bobryshev again suffered with the double-hit of his injured ankle and temperatures that reached 40 degrees Celsius. At the race at which the heat really affected him last year, this year was a different story as the Russian finished 11th in race one before an almost superhuman effort to finish fifth in race two, moving up to sixth overall in the World Championship.

Bobby will now return to Europe for medical attention to his ankle, making the most of the recovery time afforded by the three-week break before the Motocross GP of Brazil on 30 April.

Max Nagl, #12: “Unbelievable today, really great! First race I was completely last from the start but we managed to come through to sixth position. Riding was going really good, and I was really happy. Just on the start we had some problems today. Second heat, we made some changes and the start was better but the gate jump wasn’t fast, so I was again somewhere stuck in the pack. In the first few laps I make may positions and I was riding really aggressive and really pushing because I was not happy with the start.

For ten laps I had nobody in front of me and nobody behind so I could really go into my rhythm, and then I saw Paulin and Strijbos and I thought “I have to get them” and I pushed so hard. At the end of the race everyone was running slower because of the heat so in the last five laps I didn’t use any clutch, downhill I just used higher gears and let it run, keeping the revs low to help with cooling. At the end, I am really pleased with fourth and it’s been a very good weekend for the team, everyone’s done a great job.”

Evgeny Bobryshev, #777: “I knew it was going to be really hot and with humidity so high – we had maybe 40 degrees [Celsius]. First race I was eleventh – it was a difficult race for me. I’ve been fighting twice because of my ankle and the track was flat and there weren’t so many lines so you have to slide the bike when it’s like that and I couldn’t with my right leg, but we scored some points. Second race was much better. I had not so good a gate jump, but there were more ruts so it was easier for me to follow them and take the pressure off using my leg.

It was difficult at the beginning, on the first lap, because I was in the pack and people were coming from inside and outside and I was scared for my leg, but I grit my teeth and pushed and I’m happy to finish fifth. Thanks to HRC and Honda and the team for this weekend – everyone did a really great job. I’m having a medical assessment now next week on my ankle, and then we have some time for recovery before Brazil.”

Keisuke Inomoto, Team HRC Team Principal: “We got a fantastic result today. Overall this weekend has been very tough with such hot conditions, and in the second race particularly the surface was very rough. Both Max and Bobby rode very well and in the second race especially were pushing really hard to the end where they gained a number of positions. It’s a great result for Honda and Team HRC, and we keep second in the World Championship so we are very happy. It was also great to welcome Mr Shuhei Nakamoto, Executive Vice President of HRC, to the Grand Prix today.”

Roger Harvey, HRC General Manager – MXGP: “Bobby didn’t make a bad start but obviously carrying the injury, you worried whether he could continue to push tackling both that and this heat here in Thailand. Last year he suffered in the heat really badly, so today he got through that barrier and rode through the pain barrier, so it was a superb result from his side. Then when you look at Max, he really struggled away from the line. But then he kept plugging away and to get fourth, just off the podium, from last place in qualifying is a great result.

It’s been a very difficult weekend with the weather conditions and specifically the heat, but both riders and the team performed very well and we keep second in the World Championship, so it’s a great result. Now Bobby will fly back to Europe for a medical assessment on his ankle early next week, and we’ll provide an update in due course.”