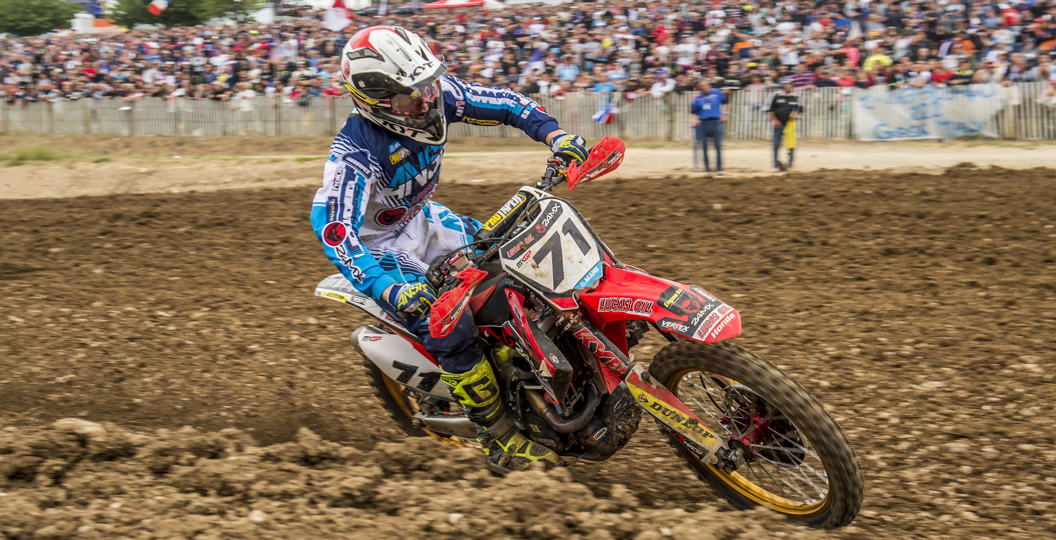 After a one year hiatus Saint Jean d’Angély made its return on the MXGP calendar. The French GP was the first one with the 24MX Lucas Oil Honda team for replacement rider Damon Graulus. Graulus immediately displayed good speed and seemed to gel right away with his CRF450R. With Priit Rätsep just having made his MXGP debut himself one week earlier, his apprenticeship continued in France.

Graulus’ performance on Saturday, when he had qualified 16th, indicated how swiftly the 21-year Belgian had adapted to his new surroundings. Cool, calm and collected he soldiered on to 13th after a mid-pack start in race one. Damon rode consistently but had to surrender to the experienced Jake Nicholls in the last three corners of the moto.

Handicapped by a bad gate pick following his crash in qualifying Rätsep needed to make the best out of a bad situation. When he had climbed up to 24th in the second half of the moto Priit’s front wheel washed out on top of one of the steep descents. The Estonian lost so much time that the chase for points was now an impossible quest and he decided to pull in. Things improved in the second race for Rätsep. From his initial 29th place on the opening lap he was able to make headway to cross the line 23rd.

A great jump from the gate was about to set up Graulus perfectly for the first corner but unfortunately he got tangled up in a group crash. With the moving wheel of Jeremy Van Horebeek on top of his motorcycle causing so much damage that Damon was in no way able to continue. Understandably the reigning Dutch MX2 champion was very disappointed but luckily he walked away unharmed. In two weeks time the series continues in Great Britain at the magnificent Matterley Basin circuit.

Damon Graulus: “I’m pleased with how my first MXGP weekend went! We used our time well on Saturday to make some changes. My pace in the first moto was good and 14th was a nice result. It’s a shame that I got caught up in a crash in the second race especially because I had a pretty good start. Even worse was that I couldn’t continue because the bike was too damaged. I’m looking forward to the next GP and the time we have now with the team in order to prepare. A big thanks to everyone who has supported me over the last few weeks that have been pretty challenging for me. Onward and upward!”

Priit Rätsep: “For me it was quite a sketchy weekend! The track was fast and slippery in some places, in others the grip was really nice. That’s not an excuse but to go any faster would have been dangerous for me at this point. Also this is only my second big race in a long time so it was good to make steps in the right direction. My starts were better, I had a better feeling with the bike.”