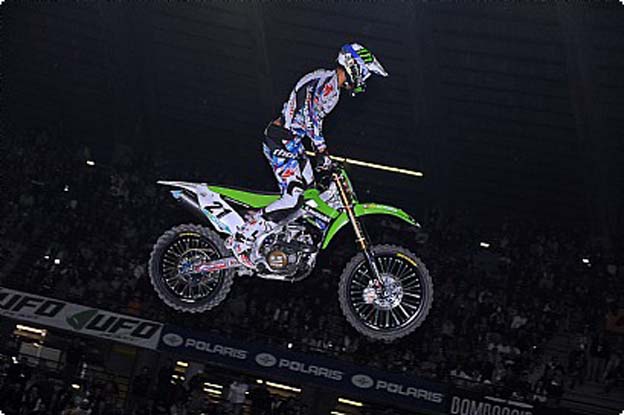 Strong results at the Genoa Supercross for Kawasaki Riders

The Supercross of Genoa is with Paris Bercy and Geneva one of the most important in Europe. Both involved in this event, Gautier Paulin and Valentin Teillet got strong results in Italy this weekend. Gautier didn’t raced or even trained on a Supercross track since nearly two years, but that didn’t really affected the French rider who was one of the main protagonist of the event. Riding his usual KX450F Kawasaki, especially prepared for Supercross by the technical staff of the Kawasaki Racing Team, Gautier improved his results all over the night. Fourth of the timed practice period, he qualified easily for the two final races with a second position in his heat race behind American Eli Tomac. Only eight at the beginning of the first main race, he came back fourth, only two seconds from the third position. With a better start in the second race, Gautier was able to snatch a podium with a third position; third overall behind Americans Justin Brayton and Eli Tomac, who are two of the best US riders, Gautier didn’t miss his comeback in Supercross!

Winner two weeks ago of the opening round of the series in Marseille (France), Valentin Teillet was again the strongest SX2 rider in Genoa; fastest in qualification and winner of his qualifying race, the Rockstar Bud Racing Kawasaki rider led the entire race and won his third consecutive main event. As he can’t be joined by any of his rivals during the last round of the series, scheduled in Milano (Italy) in two weeks, Valentin was crowned 2012 SX2 European Champion in front of 9000 fans. It’s the fourth titles of the team this season, as Livia Lancelot, David Herbreteau and Valentin Teillet already got a French Motocross titles this season respectively in the Women, Cadet 85cc and Elite MX2 series.

Gautier Paulin: « It was nearly a last minute decision to race in Genoa, as the team gave me the ‘green light’ ten days ago, when we finished the 2013 tests. Unfortunately I had no time to practice on Supercross tracks this week, as I had to go to the French Federation school in order to prepare my examinations to be able to teach later Motocross. Since my last Supercross race two years ago I just trained half day before the last German GP, but for Genoa the team provides me a bike with very good SX settings, thanks to them and Kayaba! I discovered the track on Saturday morning, and after a few laps I had a good feeling; I came here to have fun, and I had fun! My starts were not so great, but I felt easier at each lap and came back fourth and third in the main events. To finish third overall behind SX specialists such as Brayton and Tomac is a great satisfaction for me, even if they were both much faster than the other riders. I didn’t race any Supercross since two years, so that was great to get back into the rhythm, and to see that I didn’t lost so much of my SX riding!”

Valentin Teillet: “The track in Genoa was great, with a strong whoops section where it was possible to make the difference; I did a good timed practice session, and I was happy to be again the fastest rider in the SX2 class, but also to post the third lap time among the 450 riders! In my heat race I had a small crash in the second corner; the track was slippery, I was last but I came back first and won the race. Then in the main event I got the holeshot and lead the entire race, and I finished with an eighteen seconds lead. I had a lot of fun riding Supercross, and it’s good mentally to get great results and this European title; it was not in our plans to race the series, but when I start training on my Supercross track I had a good feeling and with the team we decided to enter the series. I’m happy to go to Bercy next weekend, it will be the first time in my career that I will go there really ready; I hope to get some good results there.”