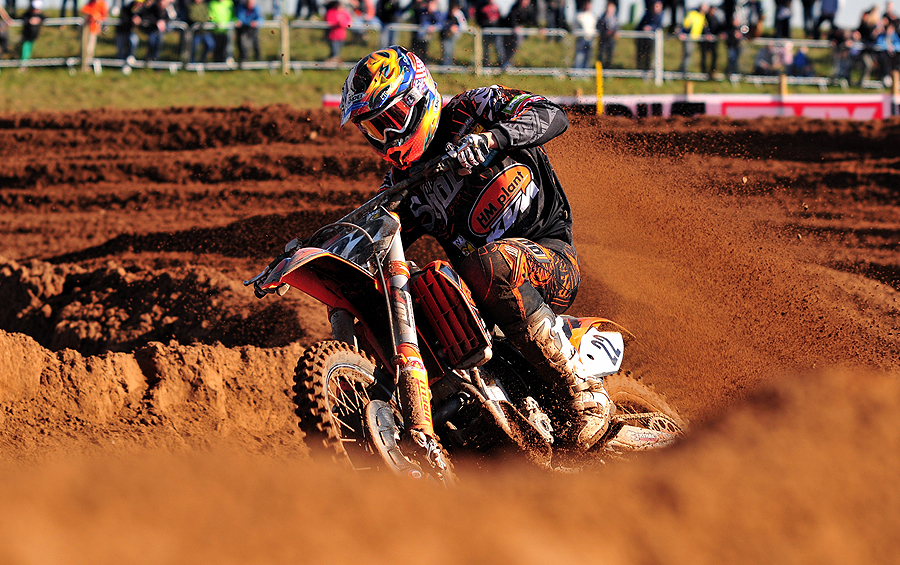 Strijbos goes back to the top

HM Plant KTM UK’s Kevin Strijbos dominates the fifth round of the 2012 Maxxis British Motocross Championship and regains the red plate in MX1 while team-mate Elliott Banks-Browne keeps hold of the MX2 series lead with a solid performance at Desertmartin in Northern Ireland.

Heavy rain leading up to the event caused concern as to whether the event would even run but some excellent track preparation by the Cookstown club ensured that the Porter’s Pit track was in prime condition come race time. A huge crowd turned out to watch the six championship motos that were held in overcast conditions with the odd sunny spell.

Kevin Strijbos absolutely dominated proceeding in MX1 taking all three holeshots then leading every lap on his way to maximum points. Kevin’s dominance not only gives him the overall win on the day but also puts him back on top of the championship chase on his KTM 350SX-F. The Belgian star will take a five point advantage headed into round six at Hawkstone Park over STR KTM’s Matiss Karro who ends the day third overall.

Still not fully recovered from his hand injury Elliott Banks-Browne started his day with a steady fifth in the Superpole qualifying session but come race time he was more than ready to do battle. When the gate dropped for moto one a huge holeshot was translated into an emphatic victory but a not so good start in race two meant EBB had some work to do. He soon forced his way through the pack and into the lead but trouble with a lapped rider and a small mistake allowed Mel Pocock to make a pass in the closing stages and with no time to retaliate the #44 racer was forced to settle for second.

Looking to make amends in race three Elliott powered into what look like an unassailable lead until a chance encounter with a rogue rock pitched him off his bike. A battered and bruised Banks-Browne remounted and put in a heroic ride to finish ninth which was not only good enough to give him second overall but also kept his championship lead intact.

The team’s female racer Natalie Kane took the opportunity to take onBritain’s best MX2 racers thanks to a break in the WMX world championship schedule. Although hitting a few difficulties on the day Natalie acquitted herself well. Meanwhile, just one week after hitting new heights at last weekend’s Belgian round of the EMX-125 series James Dunn had an unfortunate crash in moto one and was unable to race for the remainder of the day.

The sixth round of the 2012 Maxxis British Motocross Championship takes place at the infamousHawkstoneParkinShropshireon July 29.

Kevin Strijbos MX1 #22 “I think it’s been a perfect day. I took three holeshots, led every lap and won all three motos. In the first race I had a little bit of arm pump so I couldn’t push as hard as I wanted to but in the second and third races I had no problems and I could push really hard early on and then relax towards the end of the motos. Overall I’m really happy, after the last round I was a little bit down because I gave so many points away but now I’m back on top of the championship. The team is working hard and I think all that hard work is paying off. Hopefully now I can hold the red plate for the rest of the season.”

Elliott Banks-Browne MX2 #44 “In the first race I holeshot and rode my own race. Graeme Irwin was there for a bit but in the end he crashed and I won pretty easy. I don’t feel like I was riding too well but a win’s a win.

In the second one I didn’t get a very good start – I think I was sixth or something – but then I came through, a couple of them crashed and I caught Mel quite easily. With two laps to go I passed him and took the lead but then I got stuck behind a lapped rider and he was able to close the gap. I made a little mistake and he was able to pass me on the inside. That was a good race though and probably the best battle I’ve had all year.

“In the last race I got an awesome start and I felt pretty good on the track and it just felt easy. I was riding around not making any mistakes and then with a few laps to go I had a crash coming out of the back. I’d been taking the same line every other lap and there was a massive rock on the take off and there was nothing I could do – I was too committed to the jump to shut off. It just bucked me, I hit the fence and came off. I’ve hurt my wrist and my neck but I managed to finish ninth with a pretty bust up bike. It’s not been a good day because I could have come away a good few points ahead but I’m still in the lead of the championship by eight points.”

Natalie Kane MX2 #441 “I have a couple of weekends off from the world championship schedule so I took the opportunity to take part in my home round of the British championship. I like to do these races when I can and it’s always good to ride at home again because it’s been a while. My day didn’t go so well but I had a pretty good ride in the second race and I’m pleased that I was able to put in a full moto in front of my home crowd.”

Roger Magee: HM Plant KTM UK Team Manager “It’s been another mixed day but whenever you leave a British championship round with both red plates you can’t complain. It’s unfortunate that Elliot crashed when he was leading so easily in the third moto because all he had to do was bring it home for the overall win. He had just two and a half laps to go and on the same line he’d been using all day he hit a shiny rock and the bike just kicked him off. He’s hurt his wrist and he’s got a bit of a sore head as well so he was fortunate to get second overall and not lose that many points to Pocock. We go to Hawkstone next and he can hopefully extend that lead again.

“There’s not much more you can say about Kevin Strijbos because whenever he’s in sand and on form like that there’s just nobody that can beat him. After his excellent run at Bastogne last week where he reeled in some of the factory riders and showed how much his pace has improved this year to take three wins today was just the icing on the cake. We’re just thankful to KTM for their support and we’re looking forward to bringing home both championships this year.

“Natalie Kane was out with the men today in MX2 and she performed well. Hopefully she can go to the next round of the WMX series in Slovakia next week and close the gap on the current series leader Chiara Fontanesi with just three rounds to go.

“Finally, I’d like to wish James Dunn all the best – he had a crash in the first moto and although we’ve not had the report back from the hospital yet we hope it’s going to be nothing too serious.”