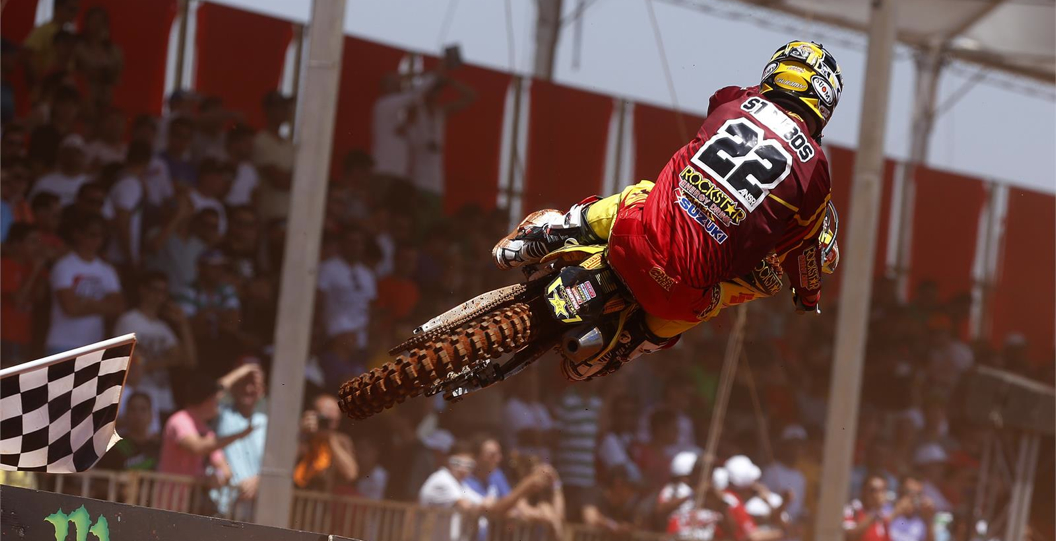 Rockstar Energy Suzuki World MXGP Team Owner Sylvain Geboers tipped rider Kevin Strijbos to shoot for a top-three position in the 2014 FIM Motocross World Championship and the Belgian duly delivered as his result of sixth overall at Trindade in Brazil on Sunday confirmed third in standings for this season.

Around 25,000 fans came to the second Grand Prix to be played-out on the red Brazilian dirt this season as the Trindade circuit in the State of Goias hosted MXGP for the very first time. The Suzuki crew discovered a jumpy and hard-pack track surrounded on three-sides by busy, noisy and appreciative grandstands of public.

Strijbos – who claimed a dominant moto win at Beto Carrero in Brazil five months previously – was quick throughout practice and qualification on Saturday and was only denied a top-three Qualification Heat result due to a problem with his boot. Fourth place was sufficient for the gate and the long drag to the open and wide first left hand turn.

Gunning his RM-Z450 off the line in the first moto under glaring sun, Strijbos chased Dean Ferris and tussled for third position before passing the Australian and settling into a lonely race whereby he was unable to close the gap to Steven Frossard. The ‘#22’ was right behind the Frenchman on the first lap of the second moto and unfortunately so. Frossard lost traction on a watered landing and crashed and Strijbos had to slide-out to avoid hitting the Kawasaki and launching over the bars. He was last by some distance by the time he restarted and then spent the race working back to ninth place.

Sixth overall and 32 points means that Strijbos cannot be caught in the MXGP standings and also cannot push Jeremy Van Horebeek out of second place with just one round and a maximum of 50 points remaining this season.

Clement Desalle missed the Grand Prix as the Belgian continues his rehab from surgery to fix a broken scaphoid in his left wrist. Desalle is however guaranteed fourth place in the 2014 series despite sitting out two rounds due to injury.

Mexico now represents the final Grand Prix appointment of the year for the Belgian crew and for the second week in succession they will encounter a new venue as the paddock flies across South America in the coming days to form up at Leon.

Kevin Strijbos: “I should have been on the podium today with the speed I had. The first moto was good, my start was OK, but it was hard to find a rhythm at the beginning; or the right lines. After about 10 minutes I went a bit faster and looked to gain on Frossard but I couldn’t do anything about the gap. Second moto; my launch was good but I lost momentum on the straight. The track had been watered OK but because it was so hard in places then just a little bit made it slippery. I knew after the sighting lap that it would be quite sketchy but it was Frossard who lost the front. I tried to brake but also crashed and a Brazilian guy behind me slid into us. That was about it. I couldn’t restart quickly but after that my speed was OK. The podium got away this time.”