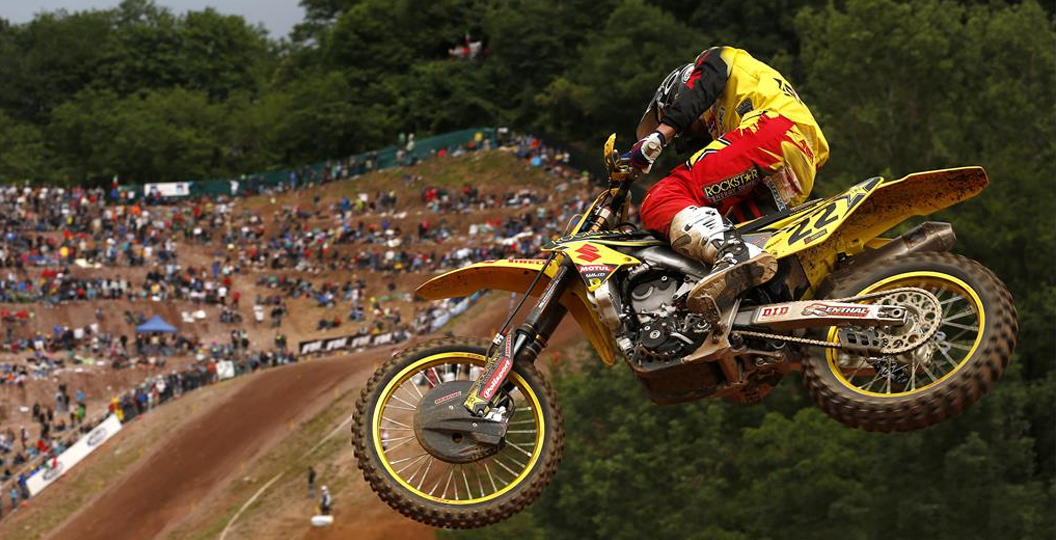 Kevin Strijbos back on the box

Kevin Strijbos was a pushy and consistent force at the front of the premier class of the FIM Motocross World Championship as the Rockstar Energy Suzuki World MXGP rider steered his RM-Z450 to a fourth podium of the 2014 series today.

The Belgian celebrated third position at the Grand Prix of Italy for round 10 and the 19th and 20th motos of MXGP category this season as team-mate Clement Desalle survived a hefty crash in the first race to finish fourth overall.

Changeable weather meant that the hills of Maggiora were slick in places, and while the Italian soil provided line choice it was still tight, winding and uncompromising when it came to overtaking. Some 35,000 spectators meant a noisy and appreciative reception for the riders and stars of the MXGP and MX2 shows.

Strijbos worked hard for his silverware and negotiated some arm-pump as well as some tough scrapes with the likes of Steven Frossard to secure the fourth and third positions in the two 20-minute and two-lap motos necessary for the RM-Z450 to again be part of the rostrum ceremony. The Belgian’s starts were not emphatic but the way he was able to attack the Maggiora inclines was impressive and constant.

Desalle was comfortably chasing first moto leader and eventual winner Antonio Cairoli in the first moto until a small mistake between line choices on the approach to a jump led to a scary dismount. The Belgian was lucky to escape with only a painful left wrist and it was testament to his determination that he was able to pick up the ‘#25’ machine and ride to the chequered flag throughout the second half of the race in seventh position. Desalle was not able get away with the leaders at the beginning of the second moto but chased the shadow of his team-mate in fourth spot after dispensing with David Philippaerts.

After two motos at the Grand Prix of Italy the FIM MXGP world standings reveal that Desalle has lost some ground to Cairoli and the red plate. The gap is now 38 points. Strijbos meanwhile retains fourth position and is almost 100 points clear of fifth place.

Rockstar Energy Suzuki World MXGP only have a few days before attention turns to round 11 of 17. The impressive circuit of Teutschenthal will host the Grand Prix of Germany next weekend for the first time since 2012 and since entertaining the Motocross of Nations last September.

“I was happy because I pushed hard in the first laps and normally this has been a weak point for me. I had some arm-pump but my speed was still good and I came back to fourth. Some others crashed and that helped. I was happy. Everything went better, even in the start in the second moto and it was a good result. The track was hard for passing and you had to be a bit aggressive. The season has been going well. We had a bit of a blip in the last two GPs but after France we sat down together with the team to see how we could turn it around. We worked hard in the last two weeks and it is coming back now.”

“Not the form of late but I did the best I could. In the first moto I was second and riding really good. I was feeling great and paid a lot for just one small mistake. I was completely on the gas before a big jump and was on a clean line. The bars just went left-right-left-right and took me off. It was a big one. It felt like Chad Reed’s crash in Millville! It was hard to restart and the lever was bent right down. I had a lot of pain in my wrist but managed to finish. I knew the second race would be tough. We made a quick check in between and the team’s doctor was here also. He said nothing was broken, which was good but the second race was hard. The start was bad and my kickstart came out for some reason. I was in eighth and came back to fourth and that was the maximum I could do. I am disappointed but I am happy that I am not worse off after that crash. The team did a great job because there was a lot of damage on the bike between the races. We will try to make things better next time.”