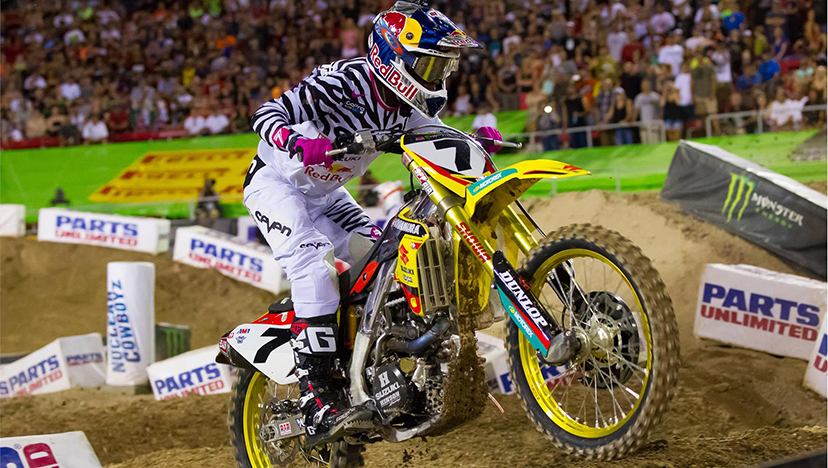 Although the final round at Sam Boyd Stadium in Las Vegas, Nevada on Saturday night saw Stewart retire early from the Main Event, but the Yoshimura Suzuki rider finished-off the year happy with his overall season.

In 2014, Stewart raced his Yoshimura Suzuki RM-Z450 to five Main Event victories and 11 heat race wins. En-route to these results, Stewart took over second place on the Supercross ‘All-Time’ wins-list with his victory in Toronto; and captured his 50th career win the next week in St. Louis.

At the weekend’s Las Vegas season finale, Stewart started out strong by qualifying fastest in the day’s practice sessions and then got the holeshot and the win in his heat race. In the end, he wrapped-up the 2014 Supercross season fourth in the overall championship points.

“I want to thank everybody on the Yoshimura Suzuki team,” said Stewart. “I hit some great landmarks this year; me personally getting 50 wins, and I had five wins this season. So even though the last two weekends have been rough for us, I’ve had a great season. I’ve done a lot of things to kind-of resurrect myself personally and on the bike, and the team’s been working hard. Now, I’m looking forward to having a few weeks off from racing, then we’ll be back to try to win the Motocross title. I feel like we’ve got all the pieces of the puzzle; we just have to put them together.”

Yoshimura Suzuki Factory Racing’s next event is the season-opening round of the 2014 AMA Motocross Championships on Saturday, May 24th, at Glen Helen Raceway in San Bernardino, California.