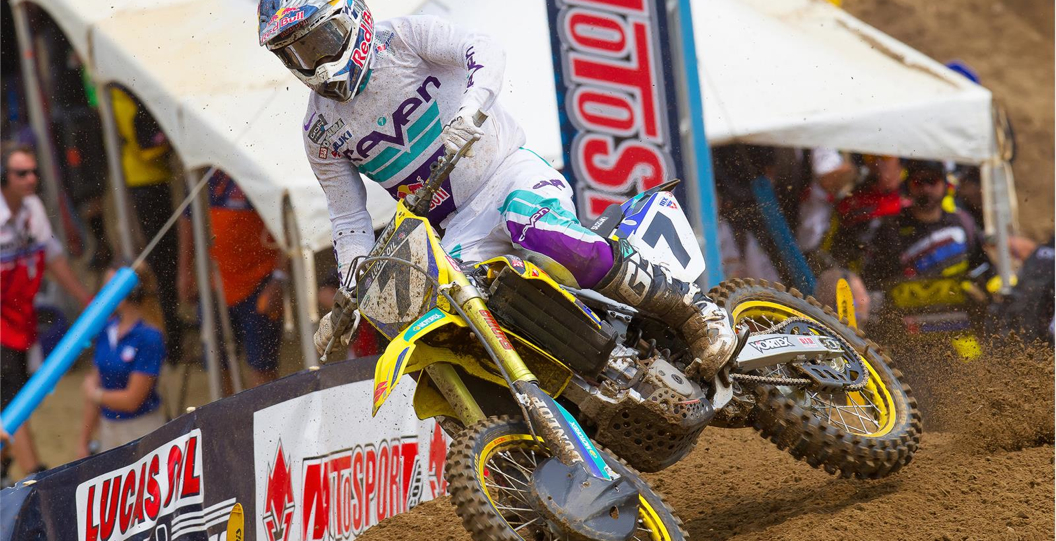 Stewart aims to be fit for Washougal

Yoshimura Suzuki Factory Racing’s James Stewart suffered more bad-luck at the eighth round of the 2014 AMA Pro Motocross Championships in Millville on Saturday, but hopes to turn things around next weekend.

Stewart had been looking forward to the Spring Creek National – having picked-up the overall victory there last year – and, at first, things were going well and the opening moto saw him get a good start on his Yoshimura Suzuki RM-Z450. Then, while running fourth on the first lap, he suffered a get-off, but remounted to finish seventh.

In the second moto, Stewart lined-up on the gate and took another good start but wasn’t feeling 100%. Because of a gate malfunction, the race was red-flagged early and the riders lined-up again. At this point, Stewart said he felt disoriented and dizzy, and retired for the day.

Said Yoshimura Suzuki Team Manager Mike Webb: “Obviously we’re disappointed, but more than that, we’re concerned about James. We’re not really sure what’s going on or whether he’s suffered health issues that we were all unaware of at the previous rounds. One thing is for certain, it’s been a tough few weeks for James and that’s taken a toll on him and the team. Right now, we’re going to get James checked-out by a physician and play the next few days by ear. His health is our number-one priority.”

Yoshimura Suzuki Factory Racing’s next race is round nine of the 2014 AMA Pro Motocross Championships on July 26th at the Washougal National.