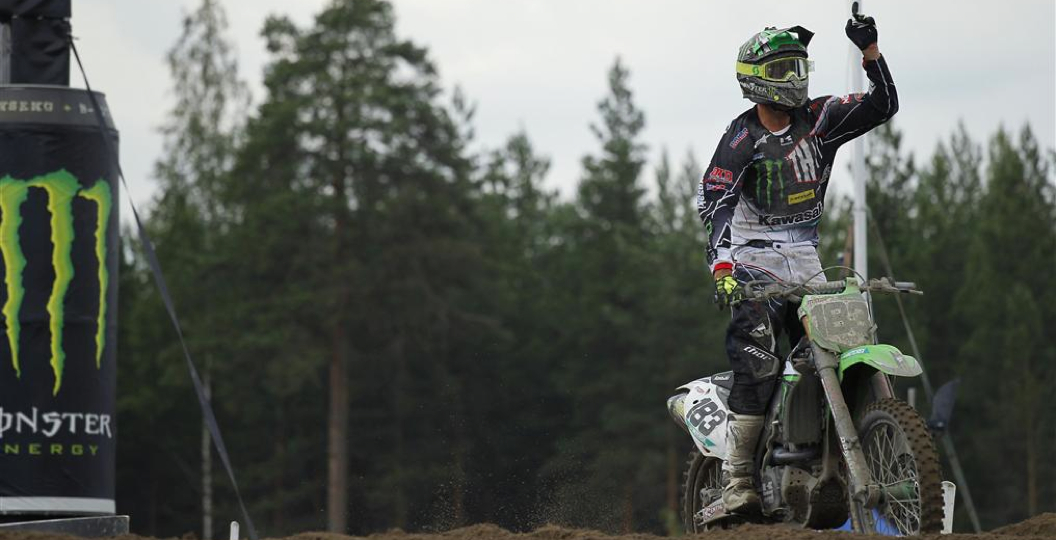 Steven Frossard took second place for the Monster Energy Kawasaki Racing Team in the Finnish round of the FIM World MXGP Motocross Championship at the rugged Hyvinkää track.

Earlier in his career the burly Frenchman was not at his best on such rough, sandy tracks but the combination of hard work by the rider himself and the technical expertise of the KRT staff have transformed him into a formidable rival on all types of track. Steven was let down by his start in the qualification race, but significant alterations to the personal set-up overnight ensured that he was able to battle with the leaders from the fall of the gate in each moto.  Setting the fastest lap of the first race, he converted an initial fifth position into a third placed finish, and was even stronger in race two as he charged up the leaderboard to an early second place, only to stall the motor and be forced to recover once more from sixth place to take the chequered flag second in moto and consequently second overall in the Grand Prix. The 42 points earn on the day have also lifted the Frenchman to fifth place in the championship standings with four rounds remaining.

Steven Frossard: “Saturday was not so good as I qualified only in eleventh position, but this morning I practised a lot of starts and finally we found a solution. My starts were much better today, and I gave everything to get this podium with two strong races. The second one was tough as I stalled the engine when I was in second; I thought that the engine was damaged but I could start it again when I tried; I lost time so I fell back to sixth place, but I came back strongly to finish second. I even surprised myself today, as in each race after twenty minutes I felt very strong physically while most of my rivals had some troubles; I could pass some guys in the last ten minutes of both motos even though for me the toughest track we had this season. It’s so nice to do two strong races, this year my main problem has been inconsistency but today I showed what I can do in the MXGP class. I have been waiting for this podium for more than two years so I’m so happy to finally get it.”