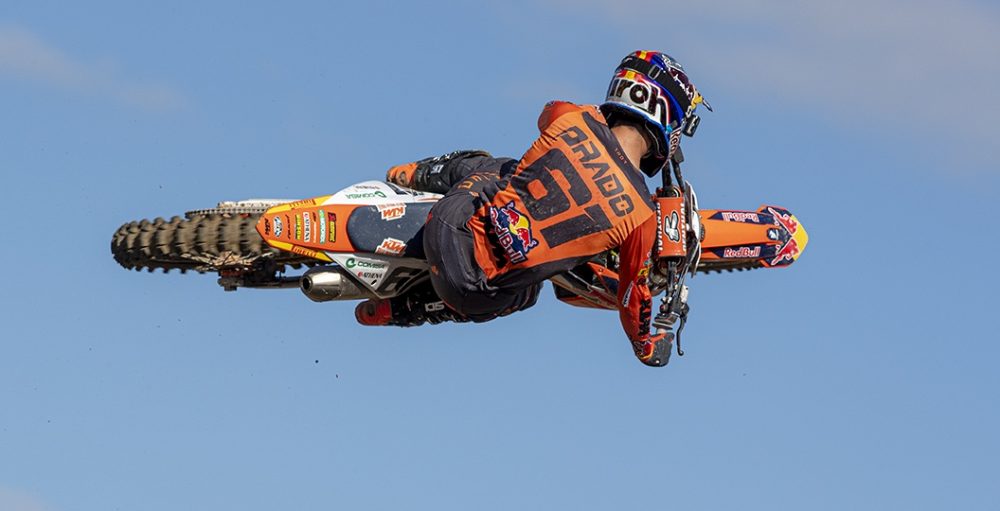 Jorge Prado was one of the three riders penalised in the second moto at the Grand Prix of Lombardia, which put him third overall instead of first. The result does not seem to matter to him too much, instead he is unhappy with the situation and position of the yellow flags. Prado explains everything in a lengthy statement from social media that has been place below, which is really quite eye opening. This is a professional way of tackling the drama, so credit where it is due.

“Hello everyone, I would like to explain what happened yesterday. After proclaiming myself the winner, a member of the FIM told me personally at the end of the press conference that they have sanctioned me with two positions and four points for jumping with a yellow flag.

“With this sanction, the final result remained the same. Although, due to the cost of winning and the fact that every point counts, I went to the FIM to explain my situation. I understand the flag is appreciated on television, but I tell you that from my position I had a blind spot. There is only one marshal to the right instead of either side. I make this assessment, because there are two more races ahead and what I want is that we have greater visibility to be able to react in time.

“My surprise is accentuated when approximately one hour and a half later, a member of my team tells me that they penalised another pilot and everything has changed again, leaving me in third position. In case so much change had not been enough, they also asked us to repeat the podium again. A fact that I imagine is the first time that happens (and I hope it is the last).

“I want to make it clear that what is really important is not doing first or third, but that we risk our lives. Safety is the main thing, and if all the sanctioned drivers have said that we did not see the flag then the FIM should take action. Last night, when I got to the hotel, I saw that @GautierPaulin explains with a video that he jumped with a yellow flag (that he did not see) and without any pilot on the ground. Also @RomainFebvre comments that we are professionals and we are not going to play the guy for nothing.

“I hope we are heard, but if you listen to us… Do we change the podium for the third time? I ask for the MAXIMUM safety, seriousness and professionalism for all pilots. I wish this remains an anecdote. Thank you all.”

Jorge Prado was moved from second to fourth in moto two, which put him in third overall as mentioned above. Prado now sits fourth in the premier-class standings and faces a deficit of 39 points to the championship leader.