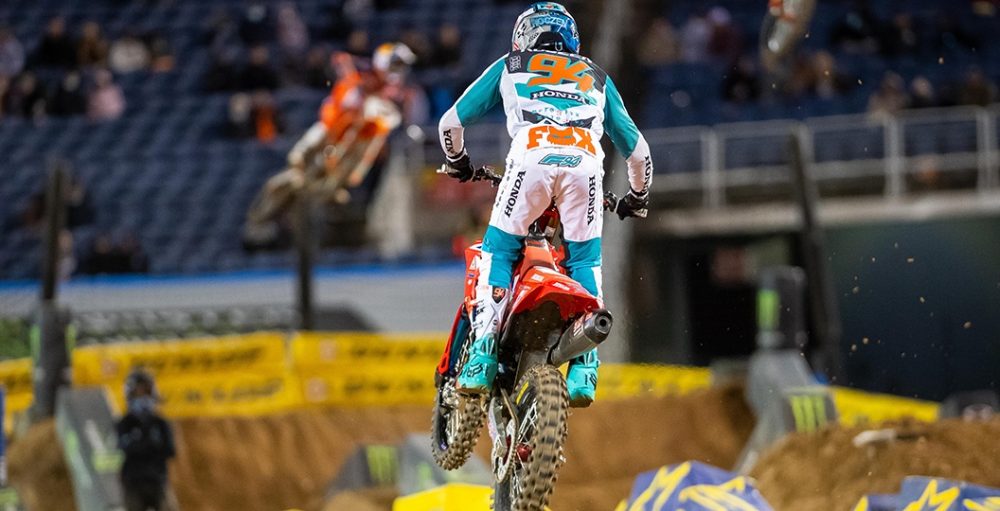 Ken Roczen was arguably the star of the show at round eight of 2021 Monster Energy Supercross, as he charged from the back to fourth and engaged in some thoroughly entertaining battles. There was no real drama, fortunately, but his race recap on social media was so articulate and insightful that it was worth sharing. Roczen details exactly why he got a bad start, how he dealt with it and why he is okay with losing points to Cooper Webb.

“That was some fun racing last night. Yeah i lost some points but I’m not the one being in the points deficit. Have some room to play with. Unfortunately I picked the wrong gate last night. Once the 250s were done they moves the tuff blocks and then I noticed that my rut was messed up and had a big kicker in it. Gate dropped and I fed my clutch and my front wheel hit it dead on causing me to really lift up and kind of deflected my handlebars.

“Twenty-second around the first turn and seventeenth around the second turn made for an intense main event. I’m leaving in a high note as I feel like I was riding well and I had a lot of fun. Ultimately I wish I could have eliminated a couple of mistakes and made the pass on Eli stick on the first try as I feel like i could have gotten to the podium. Good battles throughout the night though.”

Roczen is indeed still the series leader in the premier 450SX class. Six points separate him from Cooper Webb in third, then Eli Tomac is a massive 31 points back. In comparison, Roczen was seven points down on the series leader at this point in 2021 Monster Energy Supercross.