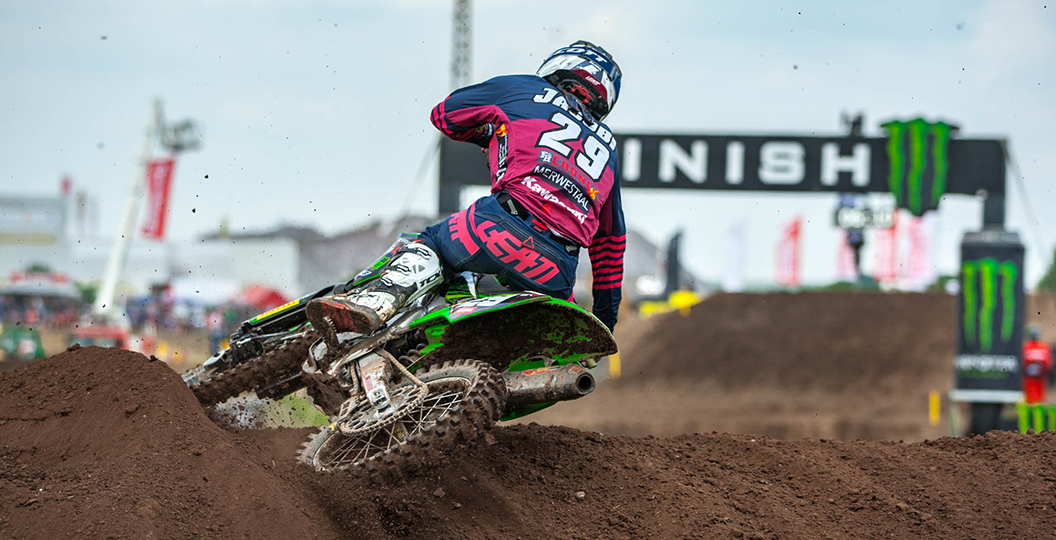 Fans and industry members across the globe have voiced concerns over the way that Henry Jacobi rode and later conducted himself at the Grand Prix of Germany. Jacobi crashed in the second MX2 moto and then, whilst charging through the field, came across his F&H Racing teammate Adam Sterry. Jacobi made the pass alongside pit lane but rather than simply hugging the inside heading into the left turn that followed, as he did all day, he swung wide and left Sterry with absolutely nowhere to go. The result was a crash that could have caused a serious injury. The incident can be viewed here.

The controversy did not stop there though. Following the final MX2 moto, Henry Jacobi rode up onto the tabletop that follows the finish line and begun waving to his German fans. Adam Sterry pulled up alongside him, in an attempt to voice his frustration about the incident that had just occurred, but Jacobi was having none of it and slapped his helmet quite hard. It definitely was not just a little tap. Now, hours after the chaos, Jacobi has issued the following statement.

“First of all I have to apologise for my behaviour after the finish line in moto two!!! Whether it was frustration, or whatever, as a professional athlete and role model for young and upcoming kids I should never behave like this no matter how much frustrated or provoked I feel!!! I am beyond sorry for this. Other than that, solid day 3-9 for fifth overall!”

Adam Sterry has not had his say yet, although that will undoubtedly occur at some point. There are other professional athletes that have stepped in to voice their thoughts though. For instance, Red Bull KTM’s Cooper Webb left the following message on Adam Sterry’s Instagram.

“Don’t know you personally but much respect to you for taking the higher road man. Not easy to do!”

There will undoubtedly be more fallout from this in the days prior to the Grand Prix of Indonesia, so stay tuned to MX Vice for more. Jacobi is now fifth in the MX2 championship standings, one point down on Tom Vialle in fourth, and Adam Sterry runs in eighth.