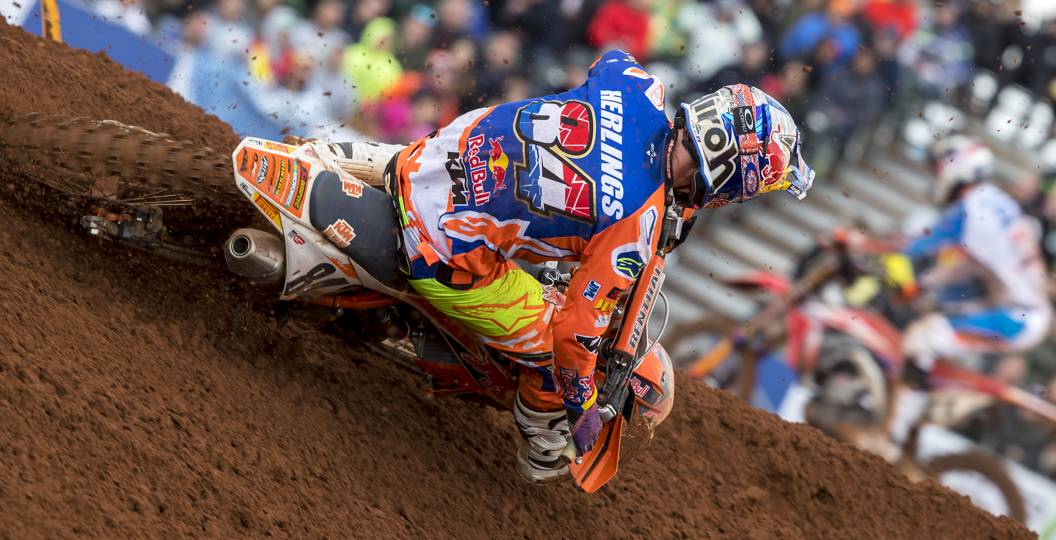 A Stat Sheet: Third Round

– There was not a pass for the lead in the second half of a race this past weekend, but there could have been. Jeffrey Herlings turned up the pace towards the end of the second moto, got extremely close to Antonio Cairoli and was just a second down at the end. How much faster was he as the laps started to wind down? The table below highlights that period. It is worth noting that Antonio Cairoli claimed that he had problems with lappers towards the end.

– Antonio Cairoli had encountered a bit of a drought before the Grand Prix of La Comunitat Valenciana. Cairoli last won an overall in the Czech Republic in July last year, so had not won in eight events. When was the last time that he had to wait that long to stand atop the podium? Well, unsurprisingly, it was three seasons ago when he encountered an arm injury in Maggiora. Cairoli won the Grand Prix of Great Britain in May that year and then next won in Germany twelve months later. Seventeen events were run between those triumphs.

– Sector one was where Antonio Cairoli really impressed in moto one, as Jeffrey Herlings simply could not match his pace. That particular section covered just a couple of turns too. It went from the finish line to turn two, but still had a large impact on the outcome of the race. “I do not know where I lost it. Many times I went next to the pit lane outside and then got off, then basically that was not the fastest line, so maybe I lost a bit there,” Herlings said about this particular point. The sector one times from race one are below.

– When a rider faces a deficit like the one in the table above, it is difficult to turn things around. Jeffrey Herlings managed that in the second moto, however, as he was much stronger in sector one in the second stint and even had the fastest time of the race. Even he was surprised by that in our post-race podcast! Sector one times from that moto can be viewed below. The time that Herlings registered on lap ten was the quickest that he went through that sector, whereas Antonio Cairoli failed to record his best (0:24.683) until the final lap.

– The quickest lap times that Antonio Cairoli and Jeffrey Herlings set in the second moto serve as proof of just how hard these elite athletes push. Eighteen laps were run in the moto and Antonio Cairoli set his fastest time (a 1:47.618) on the sixteenth lap, then Jeffrey Herlings set the quickest lap of the race on the penultimate lap (a 1:47.288). There is no time for rest in the premier division, it seems, as it is so tight at the top.

– Starts have been mentioned countless times this season and this stat offers an interesting look at how Antonio Cairoli and Jeffrey Herlings typically fare out of the starting gate. How many times has Herlings actually ended lap one ahead of his foe since he moved up to the premier division? From forty-three starts, Cairoli has ended lap one ahead twenty-eight times. It is rather remarkable when you lay it out in that fashion! Oddly, some of the best starts that Herlings has had occurred when he was struggling at the beginning of last year.

– Thanks to his victory at the Grand Prix of La Comunitat Valenciana, Antonio Cairoli has now claimed at least one overall win across the last fifteen seasons. A statistic such as that is simply incredible. The triumph in Spain was also the eighty-fourth time that he has stood atop the podium, so he is gradually edging closer to the record that Stefan Everts holds. One would presume that he will claim his ninetieth win before this season ends.

– Antonio Cairoli and Jeffrey Herlings have finished in the top five in every single moto this year, but no one else has managed it. How does that statistic compare to previous seasons? No riders finished in the top five in every moto at the first three rounds last year, bizarrely, then two riders (Romain Febvre and Jeremy Van Horebeek) managed it the year before that. Does this prove just how difficult it is to be so fast and consistent, like the Red Bull KTM duo have been?

– Gautier Paulin was really forcing the issue at the start of the second moto, hence why he was able to pass Antonio Cairoli straight up and immediately build a bit of breathing room. How long did he manage to sustain that pace for? The table below covers the beginning of the second moto. It is worth noting that the Rockstar Energy Husqvarna Factory Racing pilot lost the lead on the sixth lap.

– Thanks to an impressive ride from Julien Lieber, who charged to fifth at the chequered flag, Kawasaki had two riders in the top five in the opening moto at the Grand Prix of La Comunitat Valenciana. When was the last time that happened? Eli Tomac (first) and Clement Desalle (fifth) were both in the top five in the first moto at the Grand Prix of Americas in 2016. When did a couple of MXGP regulars last do it though? Gautier Paulin (second) and Tommy Searle (fourth) were both near the front in moto two in Brazil in 2014.

– With Max Anstie and Tommy Searle sidelined, then Shaun Simpson struggling with a mechanical issue, there were no British riders in the top twenty in the opening MXGP moto at the Grand Prix of La Comunitat Valenciana. That actually happened just last year as well, as Anstie withdrew from the opening moto in the Czech Republic. Searle and Simpson were both sidelined with injury on that day.

– Following another victory at the Grand Prix of La Comunitat Valenciana, Pauls Jonass is tied with Ben Townley on the list of all-time winners in the MX2 class. What position does that put him in? Seventh. Another three victories will put him alongside Ken Roczen in the record books, then he needs two more on top of that to match Marvin Musquin and Tommy Searle. It will not be long until he is third, behind Antonio Cairoli (twenty-four wins) and Jeffrey Herlings (sixty-one).

– When was the last time that an MX2 rider won six consecutive races to start the season? Jeffrey Herlings did it in his final term in the class, but was not quite as dominant as Pauls Jonass. Jonass has failed to lead just eleven laps thus far, whereas Herlings missed out on seventeen across the first three rounds that year. That is just one category though and Jonass has a long way to go to match what Herlings achieved as a 250F rider. The previous point serves as proof of that!

– Darian Sanayei stole the show at the Grand Prix of La Comunitat Valenciana. After setting the quickest time in the two practice sessions on Saturday, he then recorded the quickest lap times in the three races that were run across the weekend. The margin that he had over his competition in the free session, 0:01.655, was particularly noteworthy, as it is rare for someone to set a single lap time that is that much quicker than the rest.

– When was the last time that someone was that much better than the rest of the class in the first session of the weekend? Brian Bogers was 0:04.786 faster in the slop of Indonesia last year, but that does not really count. Before that it was Jeffrey Herlings at the Grand Prix of the Netherlands in 2016, as he was 0:02.723 quicker than the completion. Dylan Ferrandis had a time that was 0:02.411 better than anyone else in Switzerland the week before that.

– Darian Sanayei put that speed to good use when he charged forward from the cusp of the top five to put pressure on Pauls Jonass for the second-moto victory. The times that he set were significantly faster, but then he hit a wall with just a couple of laps to go and could not capitalise on the fact that he had cut the gap down to less than two seconds. It would have been quite the story had he broken the Red Bull KTM streak on Spanish soil. The lap times from that final race can be perused below.

– Although the results indicate that the second moto was where Darian Sanayei was the most impressive, he was just as strong in the first encounter. A poor start left him in thirteenth at the end of the first lap, so he had a lot of work to do, but he showed a lot of speed whilst charging forward. The times that he recorded whilst charging forward were very strong, especially when compared to the pace that Pauls Jonass was running out front. The lap times from the first moto are in the table below.

– There was a great battle in that first encounter. Conrad Mewse held second for a majority of the race and looked particularly strong in the position, but Jorge Prado and Thomas Kjer Olsen were nipping at his heels and slipped through towards the end. It was a game of inches before those passes, however, and the lap times below support that statement. There was not much to separate a lot of the riders on the fast circuit.

– Thanks to some impressive finishes, Conrad Mewse has jumped up to fifth in the series standings and also extended his streak of top-ten finishes to four. Has he ever come close to that before? Mewse finished ninth in three consecutive motos two seasons ago, which was his most consistent run before this. The switch to Hitachi ASA KTM Racing has undoubtedly been a successful move.

– Thomas Covington had a weekend to forget at RedSand, as poor starts and mistakes restricted him to nineteenth and seventeenth in the two motos. It is hardly surprising that he made more passes than anyone else whilst working up to those spots. Twenty-three moves were made across the two motos, so he certainly had a lot of work to do on a track that was particularly difficult to pass on. Adam Sterry came close to making more moves, following similar issues, as he made nineteen passes on race day.

– It may seem negative when a manufacturer gets rid of one of their factory teams, but sometimes it works out well. For instance, Kawasaki are higher up in the manufacturer standings than they were at this point last year. Fourth is the position that they currently occupy, thanks to the fact that their riders have acquired ninety-seven points, whereas they were only fifth with eighty-three points at this point last season.

– Darian Sanayei (second), Jed Beaton (sixth), Bas Vaessen (eleventh), Samuele Bernardini (ninth), Ruben Fernandez (twelfth) and Jorge Zaragoza (thirteenth) all acquired season-best finishes at the Grand Prix of La Comunitat Valenciana. That thirteenth was actually the best finish that Jorge Zaragoza has had since the Grand Prix of Great Britain in 2016, which was six hundred and thirty-eight days ago.