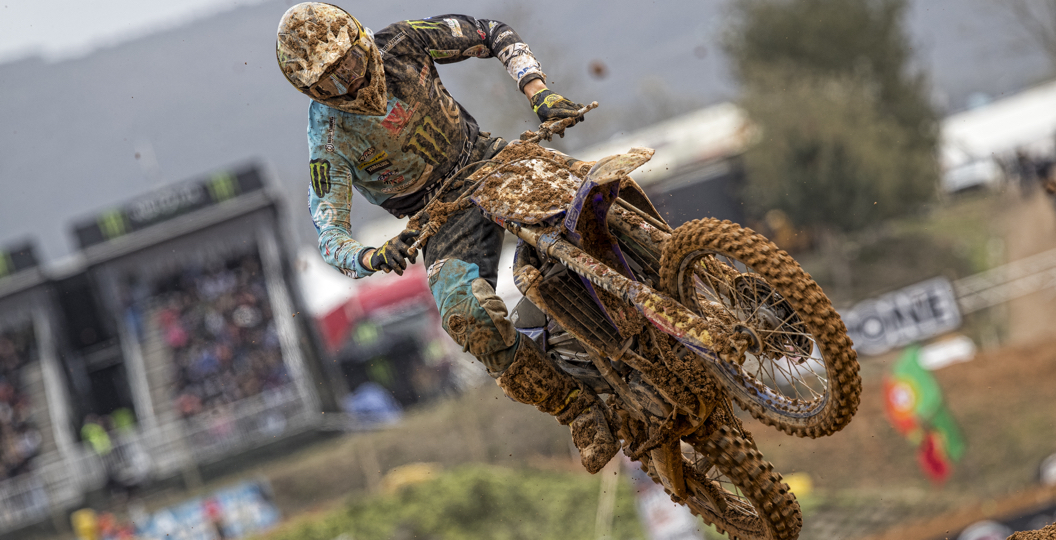 – The 0:34.373 advantage that Jeffrey Herlings had in the second moto was his biggest of the season. When was the last time that he actually had a lead that big? It was in the second moto at the Grand Prix of The Netherlands last year, as he led Max Nagl by 0:34.469 at the chequered flag. There is not much of difference between those two numbers! That advantage at Assen was actually the biggest gap that he has had in the premier division.

– Jeffrey Herlings took his second holeshot of the year in the opening moto at the Grand Prix of Portugal and actually came close to grabbing two in a row. It will be quite the milestone when he does get two of those awards in succession, as that has not happened since the Grand Prix of France in 2015. The holeshot that he claimed in the opening moto in Portugal was his third aboard a 450F.

– The beginning of the second moto was undoubtedly when Jeffrey Herlings was at his best. After sliding through to take the lead on the opening lap, he threw the hammer down and attempted to build an eight-second advantage. The Red Bull KTM team instructed him to do that via his pit board. The times from the beginning of that race are below, but it is worth noting that he crashed on the fourth lap.

– In the first encounter at the Grand Prix of Portugal, Jeffrey Herlings was instructed to work on sector one by his mechanic. How much time was he actually losing to Tim Gajser, who occupied second for a majority of the moto, on that part of the track? The table below focusses on that particular sector.

– Jeffrey Herlings led every single lap of both motos at the Grand Prix of Portugal, despite the fact that he missed out on the holeshot in the final race. When was the last time that he managed to do that? It was actually at the Grand Prix of Latvia in 2016 and, hey, he only took one holeshot on that day as well. There were seven hundred and fifteen days between those two events.

– Antonio Cairoli appears to be very comfortable with the position that he occupies currently, but statistics like this undoubtedly help with that. Two hundred and twenty-five is the amount of points that he has to his name, following the first five rounds, and he has only had more than that once before. Two hundred and thirty-five points was the total that he had after the fifth fixture in 2014.

– Although Antonio Cairoli did not lead a single lap at the Grand Prix of Portugal and has actually only won three of the ten motos that have been run, he has still led more laps than anyone else this season. Cairoli has completed eighty-five laps at the head of the field and, in comparison, Jeffrey Herlings has now led the field for eighty-one laps. Romain Febvre has led seven, then Gautier Paulin has five to his name. Domination is the name of the game for Red Bull KTM.

– It seemed as though Antonio Cairoli was going to fail to break into the top two in the first moto, as a rock hit his eye and he did not make much progress through the first half. Another gear was unearthed towards the end, however, as he cut through to second with just a lap or two to spare. The nine-time world champion was still in fourth on lap thirteen.

– The third place that Tim Gajser secured in the opening moto was a season-best finish. Kevin Strjibos (twelfth), Tanel Leok (thirteenth) and Benoit Paturel (thirteenth) were the only other riders to do that at the Grand Prix of Portugal.

– The Grand Prix of Portugal was significant for Jorge Prado for many reasons. It was the first time that he swept both races at a round, for instance, and was the fifth overall win of his career. Prado is off to a tremendous start compared to this point last season, as he has two hundred and two points to his name. It took him nine rounds to reach that total last year, you see, which is just incredible.

– Jorge Prado set the quickest lap of the opening moto on the very first lap. When was the last time that an MX2 rider managed to do that? It was actually not too long ago, as Prado did it in the second moto at the Grand Prix of Europe last month. It is clearly not too uncommon for something like that to happen.

– Seeing as the Grand Prix of Portugal marked the fifth triumph that Jorge Prado has had at the highest level, he has obviously climbed up in the record books. Prado has pulled ahead of Christophe Pourcel, who has four, and is now tied with Tim Gajser. Jeremy Seewer also has five overall victories to his name.

– Ben Watson was arguably the greatest story at the Grand Prix of Portugal, as he came within a tenth of climbing up onto the podium for the first time in his career. 0:00.172 was the difference between the pair at the finish line. When was the last time that two MX2 riders were that close at the end of a moto? It was quite common in Portugal, unbelievably, as Iker Larranaga Olano was just 0:00.880 down on Simone Furlotti in the battle for fifteenth in the opening encounter.

– Whilst charging onto the rear wheel of Thomas Kjer Olsen, Ben Watson posted countless noteworthy lap times and was even the quickest rider on track for a prolonged period. The way that his lap times compared to Olsen, who occupied second for the entire moto, is highlighted in the table below.

– Ben Watson was clearly better than Thomas Kjer Olsen at that point in the moto, but how did his lap times compare to Jorge Prado? Prado had a comfortable advantage at this time, so it is likely that he backed it down ever so slightly, but it was still rather early on.

– Ben Watson was actually only 0:03.196 behind Jorge Prado, the eventual winner, at the end of the second moto. When was the last time that the top-three finishers were so close at the end of an MX2 moto? The final race at the Grand Prix of the USA last season; RJ Hampshire, Hunter Lawrence and Jeremy Seewer were separated by 0:02.826 at the chequered flag.

– That third place in the final moto was a season-best finish for Ben Watson, of course, but who else had one of those in Portugal? Jed Beaton (third), Adam Sterry (sixth), Alvin Ostlund (seventh), Bas Vaessen (tenth), Stephen Rubini (tenth), David Herbreteau (fourteenth), Simone Furlotti (fifteenth) and Micha Boy De Waal (eighteenth).

– The list above makes it quite clear that the F&H Racing Kawasaki team had a positive outing at the Grand Prix of Portugal. The squad had three riders inside of the top ten in the overall classification, which is a huge leap forward for the Japanese manufacturer. When was the last time that there were three Kawasaki-mounted riders in the top ten? It was at the Grand Prix of Belgium in 2015. Max Anstie (first), Petar Petrov (third) and Jordi Tixier (ninth) got it done. The event was run nine hundred and eighty-eight days ago.

– Jed Beaton landed on the box for the second time in his career, but a mistake was made and the Austrian flag was raised above him. That actually meant that history was made on the Portuguese soil! The Austrian flag has never flown above the MX2 podium before, as none of their riders have slid into the top three over the last fifteen years. Those fans must be stoked!

– Adam Sterry has had a difficult time of it in recent years, as a black cloud has shadowed him for much of his career. This statistic serves as proof of that. Agueda marked the second time in his career that he has finished inside of the top ten in both motos at a Grand Prix. Sterry did it for the first time at the fourth round last year, two years after his professional debut.

– Another Adam Sterry-related statistic! The seventh overall that he acquired over at the Grand Prix of Portugal was a career-best finish. Eighth overall was his best ranking before this, you see, and he took that at the first event of his career, the Grand Prix of Patagonia-Argentina in 2015. There were one thousand one hundred and fourteen days between those two races.