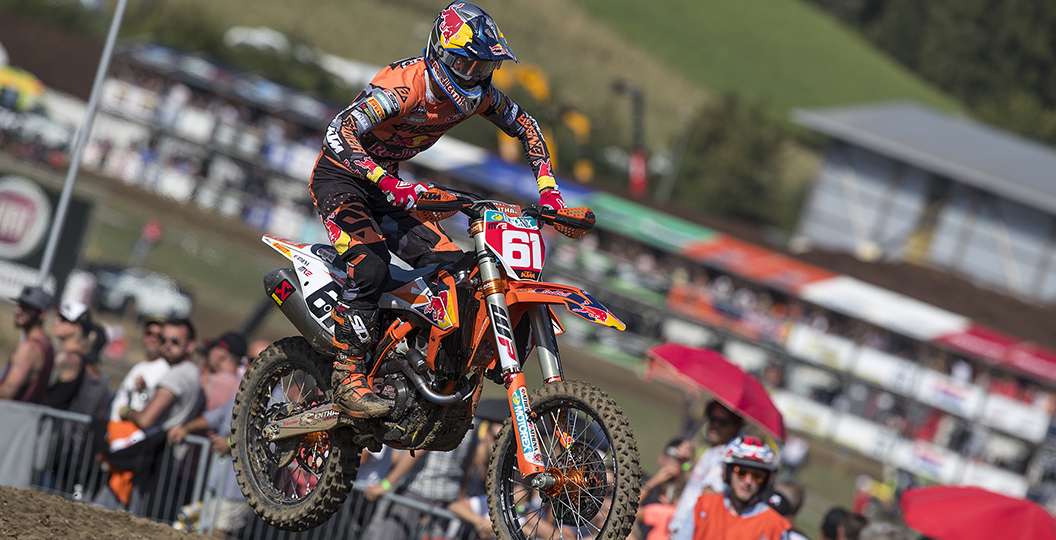 – Whenever Jeffrey Herlings gets out front early on, he lays down some blistering laps that give him an advantage that he can maintain through the second half of the moto. The first encounter at the Grand Prix of Switzerland followed that pattern. Herlings was in the lead by the end of lap one and clearly faster than his competition. If you are looking for proof, peruse the times below. This table compares him to Clement Desalle, who was in second at the time.

– The second race was very different. Although Clement Desalle led initially, Jeffrey Herlings and Romain Febvre were the quickest riders on track. Febvre actually forced the issue more than anyone else across the first five laps, which deserves recognition, but then something clicked with Herlings, who dropped the hammer and sprinted away. Herlings set his best times of the race on laps seven and eight. Those occurred right after he took the lead for the first time.

– Following yet another clean sweep, Jeffrey Herlings is sat on seven hundred and thirty-three points in the championship standings. When was the last time that the series leader had that many points after sixteen rounds? Bear in mind that Herlings scored no points at round eleven in June. Amazingly, Stefan Everts was the last one to do it. There were only fifteen rounds in 2006, admittedly, but he ended the season with seven hundred and thirty-nine points to his name. It is surprising that Antonio Cairoli has never been this dominant though, right?

– Speaking of Antonio Cairoli, the way that he has performed this season actually deserves some credit. Cairoli won the championship in a convincing fashion a year ago, as everyone knows, but only had six hundred and thirty-one points at this point in the season. Even though Cairoli has won two events this season and faced health troubles, he has six hundred and seventy-five points to his name. The level is that much higher at the moment.

– Jeffrey Herlings has now won in Switzerland twice. How many times has he won in a country just twice? It has happened in Brazil, Mexico, Bulgaria, Sweden, Finland, Spain, Argentina, USA and Indonesia! It is quite the list. Bulgaria could be removed from that list if he manages to stand atop the podium on Sunday and that is obviously quite likely. Bulgaria would then be in the same group as Belgium, Czechia and Great Britain as countries that he has won in three times.

– A championship has actually already been clinched in the FIM Motocross World Championship. KTM have already won the manufacturer title in the premier division! Two hundred and thirty-five points is the advantage that they have over Kawasaki in second. There are only two hundred points available at the final four rounds, so it is mathematically impossible for another manufacturer to catch the guys in orange.

– Romain Febvre has had a very solid season. It has not been amazing, but it has been good. It is actually quite surprising that the Grand Prix of Switzerland marked just the third time that he has landed up on the box this season and the first time that he has finished higher than third overall! Febvre last finished in second overall, the position that he acquired on Sunday, at the Grand Prix of The Netherlands last year. There were three hundred and forty-five days between those two events.

– The intensity that Romain Febvre had in the second moto is highlighted earlier in this feature. However, in order to recognise the potential that he had in Switzerland, it is important to reflect on the qualifying race that took place on Saturday. Febvre moved from sixth to second throughout the race and crossed the line just four seconds behind the series leader. The lap times that he recorded towards the end of the race were really quite impressive.

– Romain Febvre also acquired a season-best moto finish of second in the final moto at the Grand Prix of Switzerland. Who else achieved a personal best in Switzerland? Tanel Leok (twelfth) and Klemen Gercar (twentieth) were the only other guys. The veterans can still get the job done!

– This may be the most surprising statistic in this entire feature. Shaun Simpson finished in the top ten in both motos at the Grand Prix of Switzerland, which proves that he is still making progress, but when was the last time that he actually did that at a round? It was at Teutschenthal in May 2016! Eight hundred and thirty-five days passed between that event and Frauenfeld-Gachnang. There is no doubt that he belongs near the front.

– Kevin Strijbos also finished inside of the top ten in both motos for the first time this season, so had a positive showing. The drought that he experienced was not quite as long as Shaun Simpson though. Strijbos ended in the top ten in both motos at the final round last year, which was only three hundred and thirty-eight days ago. It is positive that he is starting to show flashes of his former self, because it is likely that his international career will draw to a close at the end of the current term.

– The Grand Prix of Switzerland was reminiscent of the races that were run earlier in the season, as Jorge Prado and Pauls Jonass engaged in a game of cat and mouse. The battle in the opening moto was really exciting, as Prado claimed the holeshot and then failed to sprint away. It is easy to say that Jonass had the upper hand, seeing as he won that particular duel, but their times really were close at points. The table below highlights that.

– The second race was quite intriguing, as Jorge Prado jumped out into the early lead and sprinted. Pauls Jonass started to close in at the halfway point though and it seemed as though he was going to mount an attack. The rate that he closed in arguably made this his most impressive ride in a couple of months. A mistake eventually cost him a shot at the win though. Those times are covered in the table below.

– Jorge Prado has won four rounds in succession at this point (Asia, Czechia, Belgium and Switzerland) and that streak is significant for a handful of different reasons. It has helped him to build an advantage of twenty-eight points, which is obviously important to him, and become the winningest rider in MX2 currently. Prado has claimed twelve overall victories in his career, whereas Pauls Jonass has eleven to his name. The Grand Prix of Switzerland was where Prado leapt past his teammate in the record books.

– Winning four rounds in succession is the greatest streak that Jorge Prado has had, but it is something that Pauls Jonass has never quite achieved. Jonass won three events at the start of this season but did not quite make it to four. Considering that the reigning world champion only has four races left in his MX2 career, it is likely that he will not hit that number for a couple of years. Heck, it may never happen unless he becomes a dominant force in the premier division!

– A final point on Jorge Prado and Pauls Jonass. The pair have obviously been the best riders in the class this season, but how often have the results actually shown that? Prado and Jonass have finished in first and second, in whatever order, in thirteen of the thirty races that have been run thus far. It is not hard to see why Red Bull KTM have been so dominant this year. There is no doubt that they will occupy the top two spots a few more times before the final chequered flag waves.

– There have been lots of comments about Thomas Kjer Olsen hitting a sophomore slump this season, as success has been limited since he climbed atop the podium in Latvia in May. Things are better than last year though, as he has had two podiums (France and Belgium) since his triumph. There were no more podium finishes after his sole win in Latvia last year, in comparison, so things are improving, just not at the rate that some expect.

– The average finishes that Thomas Kjer Olsen has garnered do not exactly give that impression though. Following his win at the Grand Prix of Latvia last year, he had an average-race finish of seventh through the remaining motos. Whereas this season, in comparison, he has had an average finish of eighth since that moment that he heard the Danish national anthem. There is obviously still a lot of time for him to turn things around and lower the figure. The double DNF in Great Britain hurt him as well.

– The battle for third in the championship, a spot that Thomas Kjer Olsen holds, is heating up, although it may not seem that way. Ben Watson, Calvin Vlaanderen and Thomas Covington have scored better than Olsen a lot lately and therefore the gap has shrunk. The points that were acquired from the British Grand Prix on offer an intriguing look at the way that momentum has shifted and how this intriguing battle is developing. Those points are listed below.

– Signing Marshal Weltin for the remainder of the current term has turned out to be an incredible move by the F&H Racing Kawasaki outfit. Weltin contested twenty-eight motos with his previous team, Vamo Honda, and scored thirty-six points in that period. After doing his first four races in green, he has scored forty-three points and surpassed that total. It is likely that he will add a lot to that on the hard-pack of Sevlievo this weekend.

– Marshal Weltin has not managed to beat or match his season-best finish, a fifth at Matterley Basin, yet though. Three riders acquired a season-best finish in this class at the Grand Prix of Switzerland; Anton Gole (thirteenth), Gustavo Pessoa (fourteenth) and Kim Savaste (twentieth). There are some who think that the Swiss event was the first race of the season for Savaste, but he actually contested the MX2 class at Valkenswaard with very little success.