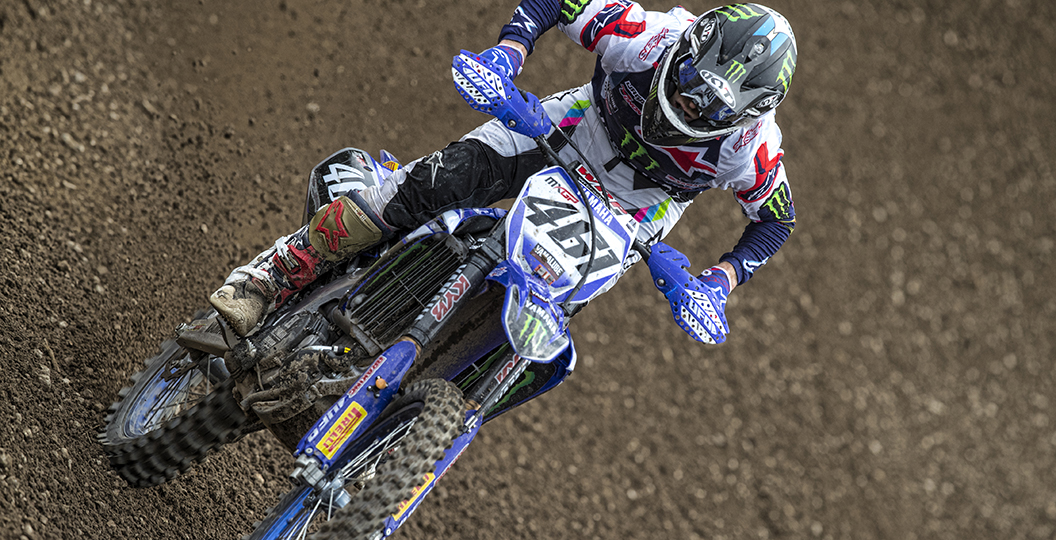 – Jeffrey Herlings did not take either holeshot on Sunday, not that lap charts give that impression. Herlings led every single lap at the Grand Prix of Czechia, thirty-eight in total, as he slid past Antonio Cairoli before the end of the first lap each time. The speed that he then possessed at the beginning of moto one immediately broke his competition, just as the table below shows.

– The times from the first moto actually offer a great look at the gulf between the top two and the rest. Jeffrey Herlings was faster than Antonio Cairoli, as demonstrated above, but then Tim Gajser was even slower. The times that he posted are recorded below and compared to what Cairoli did through the same period.

– Jeffrey Herlings led every single lap at the Grand Prix of Czechia, as mentioned above, which is actually rare. This is just the third time this season that Herlings has managed to do that. The first time that this happened was at Agueda in April, then he also managed it at Teutschenthal in May. The only other time that he has come close to doing that this season was at Pietramurata, as he led all but two laps. Antonio Cairoli led the other two on home turf.

– By winning the Czech Grand Prix over the weekend, Jeffrey Herlings became the sixth premier-class winner in six years. Clement Desalle (2013), Jeremy Van Horebeek (2014), Romain Febvre (2015), Max Nagl (2016) and Antonio Cairoli (2017) were the previous winners. It is most unlikely that a seventh winner will emerge next year. There are heavy hitters on that list! Clement Desalle and Antonio Cairoli are the winningest MX1/MXGP riders at the venue with three overall triumphs apiece.

– Jeffrey Herlings had one of his greatest advantages of the season at the Czech Grand Prix. Thirty-two seconds was his gap at the end of the first moto and he has only had a bigger lead than that on one other occasion this year, surprisingly, which was at the end of the second moto in Portugal. The biggest gap that he has had on Czech soil was thirty-seven seconds in the opening MX2 moto in 2013.

– The Grand Prix win that Jeffrey Herlings claimed at the weekend was his eleventh of the season and seventy-eighth of his career. Antonio Cairoli has eighty-five triumphs to his name and, with just six rounds left this year, it is impossible for Herlings to match that number before the end of the current term. There is no doubt that it is going to happen eventually though and, hey, both riders could pass the record set by Stefan Everts before the end of their respective careers.

– Round fourteen of the FIM Motocross World Championship marked the third time that Jeffrey Herlings has stood atop a Czech podium. Where else has he won three rounds in total? There is actually just one other nation, Great Britain, where he won in 2014, 2016 and 2018. It is worth noting that could change by the end of the season, however, as he has won in Belgium and Bulgaria twice thus far. Events in those two countries are rapidly approaching, so there is a chance for him to add to those totals.

– Antonio Cairoli lost a lot of time at the start of the first moto, but the second moto was the complete opposite. Cairoli pushed Jeffrey Herlings through the first half and the lap times were very interesting to follow. The period is highlighted in the table below.

– Antonio Cairoli ended with a brace of seconds in the Czech Republic and was left on the second step of the podium. How many times has he had those moto scores at a round of the FIM Motocross World Championship? It has happened thirteen times and occurred for the first time in Italy in 2006, but he has already done that five times this season. Cairoli had only acquired those scores twice in a single season before the current term fired into life.

– Romain Febvre ended fourth overall, a position that he is so familiar with at this point in the season, and was trailed by his teammate, Jeremy Van Horebeek. When was the last time that Yamaha had two riders inside of the top five in the overall classification? It was at the opening round of the current campaign, the Grand Prix of Patagonia-Argentina, in March. One hundred and forty-one days have been and gone since that event took place.

– Clement Desalle has had such a great run at the Czech Grand Prix, but this past weekend did not exactly go to plan. Desalle scored a fourth and a seventh and was left in sixth overall at the end of the weekend. When was the last time that he finished both motos in the Czech Republic and was left outside of the top five in the overall classification? A 9-8 scorecard left him eighth overall in 2008. Three thousand six hundred and thirty-four days have passed since then!

– Clement Desalle is having a better season than what he has had in recent years. Following fourteen of twenty rounds, his total sits at four hundred and sixty-nine. When was the last time that he had a score that high at this point in the year? 2014. Four hundred and eighty-four points was his score after fourteen rounds in that season. This is the best that he has performed with the Monster Energy KRT crew, who he will also be with next season.

– Jorge Prado claimed his seventh Grand Prix win of the season and tenth of his career on Sunday. All it would take is one more victory and then he would tie Pauls Jonass, who currently has eleven Grand Prix victories, in the record books. Thomas Covington is the next winningest rider in the division, as he has climbed atop the box three times in his career.

– Twenty laps were led by Jorge Prado at the Czech Grand Prix, which was more than anyone else. Prado has led the most laps at just five of the fourteen rounds that have been run this season. Two hundred and three laps have been led by him across the entire season and then, in comparison, Pauls Jonass has led one hundred and eighty-two.

– There were so many intriguing battles in the MX2 class. Firstly, the way that Calvin Vlaanderen ripped through the field and caught the leaders left an impression on everyone in the paddock. It is quite clear why he was able to take the moto win, based on the table below, as he was running at a very high level consistently.

– Calvin Vlaanderen has been on quite a run recenttly, which has been great for HRC. When was the last time that the Japanese manufacturer had a rider on the MX2 podium at three consecutive rounds? Tim Gajser did it at rounds fifteen, sixteen and seventeen in 2015. What about the last time that there was a South African on the box at three consecutive rounds? Tyla Rattray did it at the final three rounds in his title-winning season, 2008.

– Honda had two riders in the top six in the MX2 overall classification at the Czech round, thanks to Calvin Vlaanderen and Hunter Lawrence. When was the last time that HRC were able to boast about something like that? It was actually not too long ago. Michele Cervellin joined Vlaanderen inside of the top six at the Grand Prix of Germany in May, in what was his final race in red. At least he gave them something to remember him by.

– The first sector on the Czech track, which ran through the four turns that followed the finish line, was a strength for Calvin Vlaanderen. It was a spot where he was consistently faster than his competition in all six sessions. The times below, which were taken from the first moto, highlight that sector.

– Calvin Vlaanderen has really been on top form since the Grand Prix of Germany, where he claimed his first podium finish of the season, and the points below indicate where he would be if that was the start of the season. These points also offer an intriguing look at the gap that has developed between Jorge Prado and Pauls Jonass.

– There was not a single British rider inside of the top ten in the MX2 overall classification at Loket. Ben Watson and Adam Sterry were more than capable of slotting into there, of course, but crashes held both riders back. When was the last time that this happened? It was at the final round last year, the Grand Prix of Pays de Montbeliard. Watson missed out on a position in the top ten by a single point that day. How times have changed!