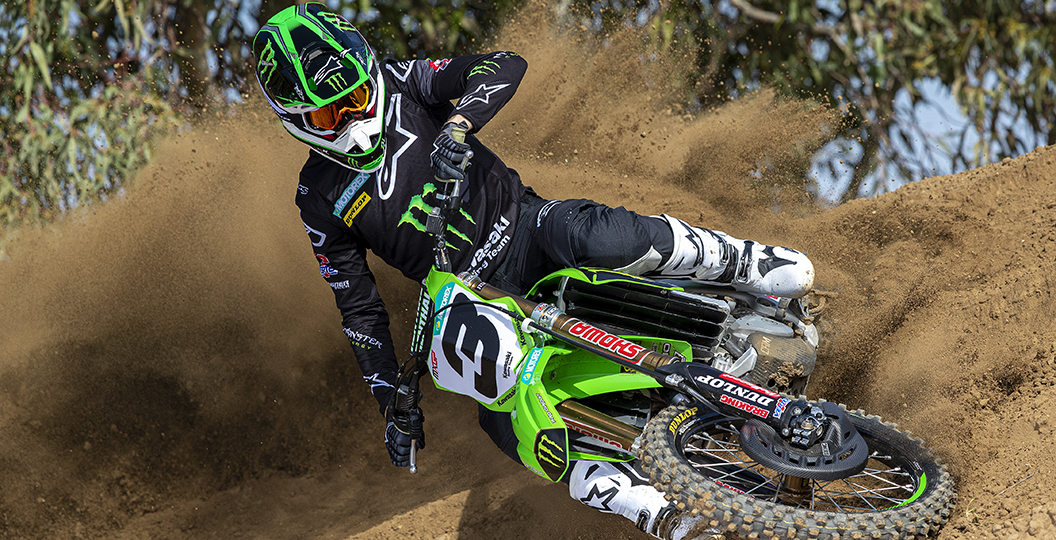 Romain Febvre could end up being the most successful 450F pilot that Kawasaki has had in, well, the history of the MXGP (previously named MX1) class. That may not even take two or three years… That could happen by the end of this rather odd 2020 FIM Motocross World Championship. A deep dive into the history of the class revealed just how desperate Kawasaki as a manufacturer are for Febvre to place his new steed at the head of the field.

Where to start? The category in its current format was launched in 2004 and all of the major manufacturers at that time immediately logged a race win in that season, except for Kawasaki. Kawasaki had to wait a lot longer for their maiden MX1 race win – three years to be exact – that eventually came at the hands of Billy Mackenzie in Japan. That was the first overall win for the burly KX450-F SR too – Kawasaki got on the board! There was more success that term, but it was the GPKR Kawasaki operation that added to the win tally. Sebastien Pourcel jumped up onto the top step twice in the second half of the 2007 FIM Motocross World Championship and clinched three race wins, and then followed that up with two more overall victories and five moto wins in the 2008 FIM Motocross World Championship. Tanel Leok (riding under the official KRT banner) joined him as a green victor that year with a single overall win and moto win in Northern Ireland.

Those two terms of spotty success were not sustainable though, as a significant dry spell was hit in the next two seasons. There was not even a single moto win to speak of in that time. The 2011 FIM Motocross World Championship was set to follow a similar pattern, but then Christophe Pourcel made an impromptu return to Europe with the CLS Kawasaki outfit and secured three moto victories. The younger Pourcel brother was committed to Europe and Kawasaki in 2012, which helped, as did luring Gautier Paulin over in what was his first season on a big bike. Kawasaki have won consistently since then, with last year being the only winless term, as the tables below show. There has not been one specific year where they made a sizeable dent in the win column though – it is more drips and drabs.

The point is that Gautier Paulin is the most successful Kawasaki rider in the history of the MXGP/MX1 class, as he has the most victories on green machinery with six overalls and eleven moto victories. How much did he contribute to the numbers that Kawasaki has amassed since the introduction of this category? Kawasaki has had 21 overall victories since 2004, placing them fifth out of six compared to other manufacturers, and 38 moto victories in the same time (leaving them in the same ranking compared to their counterparts). The manufacturer is desperately in need of one rider to drive them forward over a prolonged period and make a mark both on the track and off of it. Who better than Romain Febvre? One would be hard pressed to find a stronger candidate who is available and open to moving, plus it really seems as though Febvre has settled in for the rest of his career.

Those numbers that were recorded by Paulin in the Kawasaki portion of his career are not insurmountable, especially for a star as decorated as Febvre. Febvre actually beat both of those numbers in a single season with Monster Energy Yamaha Factory Racing (eight overall wins and fifteen moto wins in year one), so he has even done it before. Could it happen this term? It would be a big ask, but it cannot be ruled out. Even if it does not materialise over the next six months, one has got to think that he will end up as the most successful KX rider of the modern era at some point. Monster Energy KRT are potentially set up to do more damage than ever before with such a potent line-up, but could a pivot in strategy ensure that their numbers match up to that of Yamaha and Honda in the next ten years?

Clement Desalle remains a contender for podiums, but it is rather unlikely that he will contribute too much to the win column in the future. Febvre is capable of handling that task, as mentioned above, so is now the time for Kawasaki to invest in the future and guide a talent like Ben Watson or Thomas Kjer Olsen, therefore ensuring that they have a solution in place when Febvre hits the downside of his time at the top? That long-term plan with guys appears to have let them down in the past, not helped by the lack of a consistent MX2 effort. This could be the point where Kawasaki really set the foundations for a strong ten-year run that far surpasses what they have done in the last decade. Signing Febvre was a great first step, but what next?