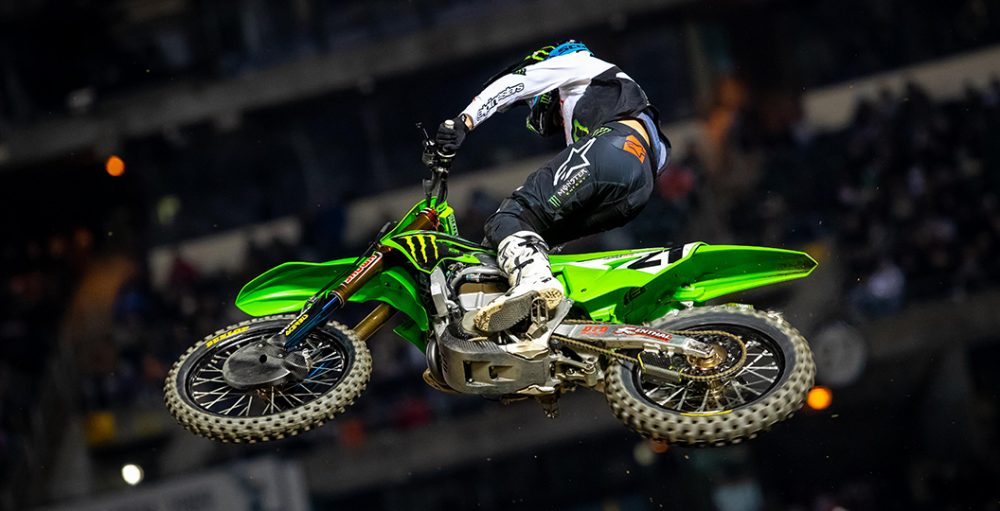 Jason Anderson had not won a 450SX main event since March 03, 2018, but ended that significant drought in RingCentral Coliseum on Saturday evening. Even with the win removed from the equation, it has been a brilliant start to his stint with Monster Energy Kawasaki and one that has most convinced that Anderson is back to his very best after a wayward time of it in recent years.

It is rare for a rider to find a way to win again after missing out for so long and it is understandable that some presumed that he would never return to the very top. Heck, even Anderson claimed that it felt as though he was on a decline last year. Now that the shock factor from Oakland, the second round of the 2022 Monster Energy Supercross series, has worn off, it almost feels like such a result could have been predicted. Starting strong is something that he does more often than not, much like Ken Roczen and Justin Barcia.

This marks the eighth season that Anderson has steered a 450F in Monster Energy Supercross. In four of those seven seasons that he has completed, he has secured his season-best finish by the time that the circus has hit the end of the first quarter. The current campaign can be filed under the same category, seeing as it is impossible for him to improve on what he just did in Northern California. Add in the natural motivation that comes from new surroundings and it feels as though the writing was on the wall.

Should this impressive form continue into February, whispers about whether this is sustainable or not will get a lot louder. The statistics below could be used as evidence for either side. There is no hiding from the fact that his averages are impressive, but an average of fifth or sixth is not going to put him in a position to compete for a championship. There is no hiding from the fact that few expected him to prosper so quickly aboard the KX450, so perhaps he is going to impress and improve on past performances?

Note: Anderson finished on the podium in his very first 450SX main and followed that up with a sixth at round two. The finish that he secured at Anaheim 1 was a season-best finish – he only secured one more podium finish in that campaign.

Note: Anderson won the opening round, his first victory in the premier division, and that was the only time that he reached the chequered flag first that season (he was credited with the win at the eleventh race in Detroit after Ryan Dungey, the winner, was docked positions by officials).

Note: Anderson started the term well again, with a brace of fourths, but this is a rare example of him ending a little stronger than he started, as he completed the season with a 3-3-3-1 scorecard. Still, the way that he started the season would certainly be deemed a success and it was more consistent.

Note: Anderson had a near-perfect start to his championship-winning season, as he took second at round one and then won round two. Anderson won three more rounds that season and all of those came in the first half of the campaign. The hard work was done at the beginning of 2018 Monster Energy Supercross.

Note: Anderson had a horrific time of it during 2019 Monster Energy Supercross – the pressure of defending his crown restricted him to fourteenth at round one. It was a season with few highlights, but he leapt onto the podium at round two. It was his only podium in a season that was cut short due to an injury after round three.

Note: Anderson started his year in a strong fashion, yet again, registering a 5-3 scorecard at the first two rounds and then followed that up with an identical scorecard at rounds three and four. Anderson had five podiums that season, with three of those happening in the first half of the campaign.

Note: Anderson had little to shout about in 2021 Monster Energy Supercross, as there were just two third-place finishes. This was the most difficult start to a campaign that he has had and the first time that he did not land in the top four at one of the first two rounds. This season caused expectations to evaporate in the off-season.