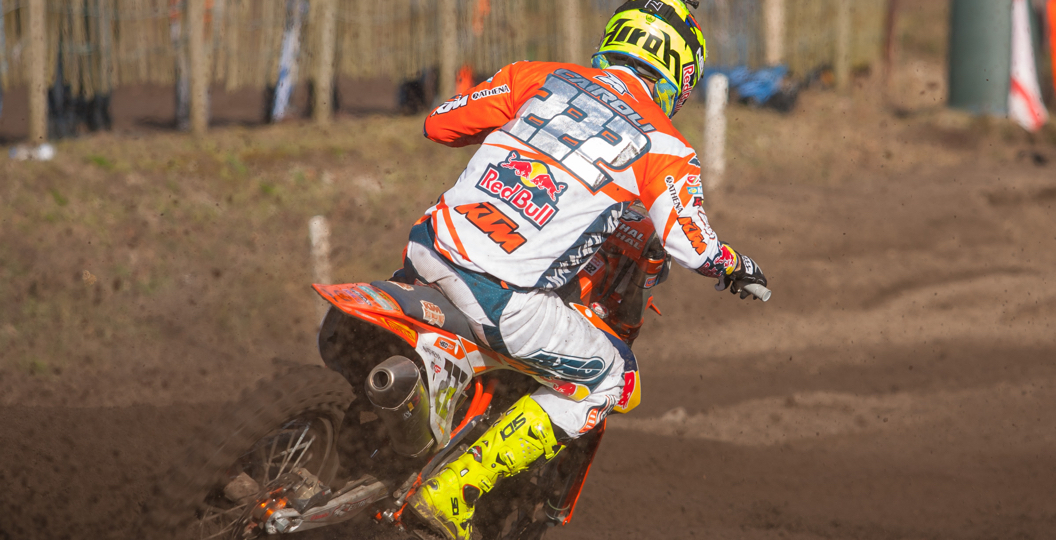 – If there was going to be an event where chinks may start to appear in Romain Febvre’s armour, it would have been this one. Rumours suggest that he was carrying a small injury and Valkenswaard was his worst race last year, so you could argue the odds were stacked against him. Despite crashing in both races, Romain still dominated to claim the eleventh overall win of his career.

– Although Febvre’s ride in moto one may not be considered his best, his pace was seemingly still there. The Frenchman was the fastest man on track through the first six laps of the race, but dropped off towards the end as he “never really found a rhythm.”

– Max Nagl was a quiet second overall, but the lack of attention is not a result of him being mediocre. A strong first moto ride was followed up by a poor start in moto two, but the German charged from the cusp of the top fifteen to secure his first overall podium finish since the Spanish GP last year. Who knew it had been that long?

– It may look like Tim Gajser made countless mental errors in the second moto, which cost him a shot at the second MXGP win of his career. However, it was actually a bike issue that caused him to drop back. “The bike stalled two times, but we still finished on the box so that’s really good,” said Tim. Third overall may have been his worst result of the year, but he maintained his one hundred percent podium record.

Antonio Cairoli looked like he was about to get his season back on track in the second MXGP encounter this past weekend, but he lost his grip on the lead with half a lap to go. This knocked him off the overall podium, so he still hasn’t collected a trophy since the French GP last year! That is quite a drought. ‘222’ is obviously not quite one hundred percent, but the fact that he led for so long should give you an indication of where he is at when he reaches his full potential.

– There was obviously quite a difference between how Cairoli performed in moto one and moto two. Why was that? Antonio made a change to the rear suspension between races and also found the track more to his liking later in the day. Multiple riders commented that it was more like enduro in moto one.

– Tony sits thirty-seven points down on Febvre at this stage, which is a position he is unfamiliar with. The closest he has come to experiencing this was in 2011, when he sat twenty-eight points behind after three events. The Sicilian won the title by one hundred and twenty-four points in the end that year, so don’t rush to rule him out!

– Evgeny Bobryshev was beaming with confidence on the day prior to the European GP and was eager to win for the first time since Teutschenthal in 2011. The Russian was left disappointed with sixth overall, however, and was left searching when it came to bike set-up. Bobby also hurt his leg whilst battling with Strijbos in the second moto, but that isn’t something that will hinder him moving forward.

– It is a case of ‘what could have been’ for Kevin Strijbos and the Suzuki World MXGP team, as bad starts thwarted his efforts. Goggle issues caused him to lose a considerable amount of positions on lap one of the first race and then he again struggled to get out of the gate in the final outing. The records show that he made sixteen passes across the two motos.

– Strijbos’ teammate, Ben Townley, scored just seven points after spending a majority of the week in bed with an illness. The New Zealander still wasn’t anywhere near one hundred percent when it was time to take to the track, but tried to dig deep and salvage some points. He’ll now head home to see his family before the Argentine GP.

– Shaun Simpson was also dealing with a stomach virus, but wasn’t quite in as bad a way as Townley. The Scotsman showed potential on day one, but a handful of crashes in the two motos cost him dearly. Although eighth overall wasn’t exactly what he was looking for, the Wilvo Virus Performance KTM rider still has thirty-three points more than he did at this point one year ago.

– Oh, what could have been! Tommy Searle was arguably having one of his best days in the sand, but some bad luck led to a mediocre overall result. Searle showed speed in practice, but a lap one crash in qualifying left him with a poor gate pick for the two motos. ‘100’ finished eighth in race one, but had the sixth best lap time, and was then running ninth in moto two before running out of fuel on the final lap. Searle confirmed that his mechanic topped it up following the sighting lap, but the tank must not have been big enough for the conditions.

– Starts have been his kryptonite thus far this year, but he got out the gate well in the qualifying heat and then did the same in moto one. Tommy would have probably had the holeshot in that one, had he been in a better position on the gate, but he got pushed wide and into the banking.

– Like Searle, Clement Desalle was robbed of a better result by a mechanical issue. The Belgian, who is getting closer to full fitness, finished ninth in moto one and sat eleventh in race two. However, a rock damaged his drive chain and forced him to retire. Desalle expects to be in a position to challenge at the front after the next two flyaway events.

– David Philippaerts’ 2016 MXGP debut didn’t exactly go as planned. The former champion crashed in moto one and “injured his back slightly”. Fortunately, the injury wasn’t too serious and he was able to score two points in moto two.

– Shocker, right? Jeffrey Herlings dominated proceedings at his home GP and took the fiftieth overall win of his career. The Dutchman did it in the best fashion possible too! Going 1-1 is nothing new to him though, as forty of his fifty wins have been clean sweeps.

– Pauls Jonass was clearly the second best guy in MX2 at Valkenswaard and tied his most successful weekend ever. He went 2-2 on two occasions last year and has never scored more than forty-four points on a single weekend.

– Second place is actually Pauls’ best moto result of the season thus far, but he wasn’t the only rider to set a personal best in the sand. Petar Petrov (third), Ben Watson (eighth), Freek van der Vlist (eleventh) and Davy Pootjes (sixth) did the same.

– Speaking of Petrov, he was looking good to finish on the overall podium until a crash in moto two caused him to drop down the order. Van Doninck ran into him at this point and damaged his Monster Energy KRT machine, so the Bulgarian was forced to make a pit stop with unspecified bike issues. Petar ended the moto twenty-third, just outside of the points.

– Jeremy Seewer is arguably one of the most-improved MX2 riders this year, as he is the only rider other than Herlings to finish in the top five in all of the six motos that have been run and has also scored forty-two points more than he had at this point one year ago. How much has he improved? This should sum it up: “If I think back to here a few years ago in the sand then I was lapped twice!”

– Brent van Doninck actually had one of the better weekends of his career, which ended with him tying his career best moto finish with a fourth in moto two. The Belgian was certainly capable of more, but starts hindered him over the weekend. According to the lap charts, he made fifteen passes through the two motos. Chances are he started ever further back than that too!

– Aleksandr Tonkov was one of the many riders who was dealing with an illness this weekend, hence why his results were a little mediocre. The Russian’s chain actually fell off on the final lap of moto two, which hindered him further. He dropped from third in the championship to fourth.

– Davy Pootjes may have recovered from the broken collarbone that he sustained at the GP of Qatar, but he is still dealing with a damaged nerve in his shoulder and a broken rib. ‘46’ put in a valiant effort to record a sixth in moto one, but was relegated to fifteenth following a crash in moto two.

– Thomas Covington had a disastrous weekend, but there is a reason for that. Thomas broke his ankle in the week prior to round three, but decided to push through the pain and attempt to salvage something. That work was for nothing, it turns out, as he didn’t pick up a single point. Thomas will try again in Argentina, where he had strong finishes one year ago.