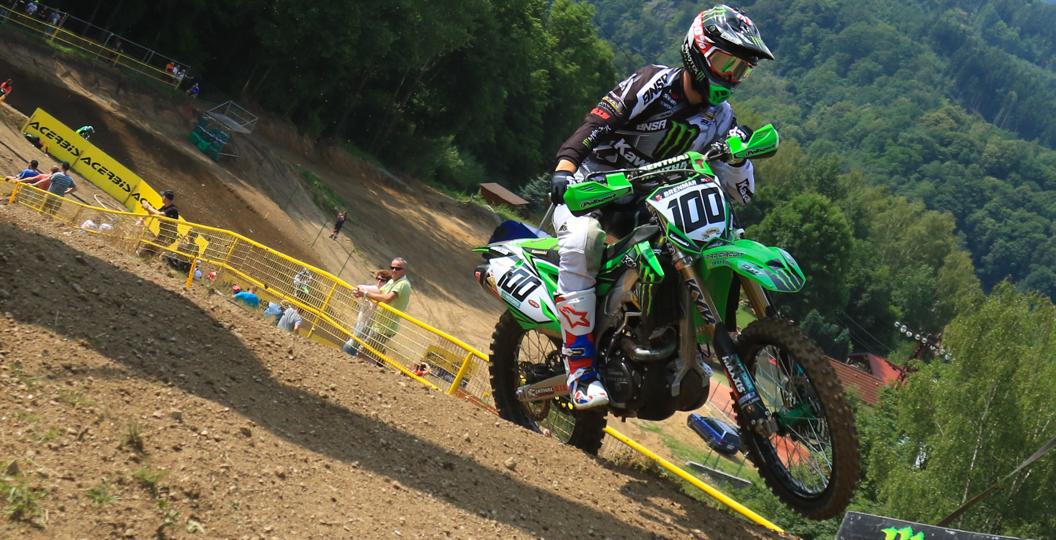 – Although Tim Gajser could only muster up a brace of seconds on Czech soil, which was his worst showing in more than two months, he still managed to stretch out his streak of top-two finishes. Gajser has not dropped out of the top two in the last ten motos, which is an impressive statistic that only the best are capable of achieving. When did someone last do something similar in MXGP? Antonio Cairoli record fourteen consecutive finishes in the top two at the tail end of the 2012 season.

– Antonio Cairoli enjoyed a long, successful period on the KTM 350 SX-F from 2010 to 2014, but then felt the need to transfer to the more-powerful 450 SX-F just six rounds into the 2015 season. The eight-time champion has opted to switch back to the smaller bike now, however, with the goal of adding more victories to his current total. His debut on the new model unfortunately did not go to plan, as he garnered just twenty-seven points. Cairoli has not done worse than that at all this year, but he did do just as badly in Mexico.

– Loket is a track that Cairoli has not attempted to hide his disdain for, which is hardly surprising. The Czech hillside has not been too kind to him in the past. Since stepping up to the premier class in 2009, he has won just four of the fourteen motos that he has completed on the stony surface and finished off the podium six times.

– Max Nagl enjoyed a bright spot in an otherwise underwhelming season on Sunday, as he gave Husqvarna their first Grand Prix win in four hundred and sixty-three days. I am sure that more success was expected, considering how strong he was at that point last year, but Nagl hasn’t necessarily had an awful season. Inconsistency has cost him dearly, but he has won the same amount of motos as Antonio Cairoli and finished on the box twice more than the eight-time champ.

– The fact that Nagl managed to win both motos was quite poignant, as he had only managed to do it four times before. The first came in Italy in 2008, which was actually the first win of his career too, and the most recent was the Qatari opener in 2015.

– Romain Febvre managed to get straight back into the mix with a consistent scorecard on Sunday, which served as a reminder of what could have been. Had he not missed those two rounds, he would more than likely have the same amount of moto podiums as Tim Gajser. That is how close it could have been! The one statistic that Febvre is struggling with is the fact that he has only led seventy-three laps across the season, but I would put that down to the fact his starts are sub-par at best.

– In the two motos on Sunday, Febvre was fourth and ninth after the first laps in the first and second motos. Those were actually some of the better starts that he has had recently, as he often finds himself between eighth and twelfth. Starts are a common issue for Monster Energy Yamaha Factory Racing, as Jeremy van Horebeek never gets out of the gate near the front!

– Jeremy van Horebeek has started in the top five just once in the last eleven motos and has an average starting position of eighth overall. With that in mind, it is actually quite surprising that he finishes near the front so often. Podium finishes have eluded him, which is what he really wants, but he often finds himself in fourth or fifth. In fact, he has finished in either of those positions in fourteen of the twenty-six motos run this year.

– If you had said three years ago that Evgeny Bobryshev would end up being a picture of consistency, you probably would have been laughed that. He has become that though, as you’ll find him between third and eighth most weeks. Loket did not quite go to plan for him, however, as it was his worst round in quite some time. When did he last do so poorly? The GP of Sweden last year, but only because he failed to finish one of the motos, and before that it would have been the mudder in Maggiora.

– Tommy Searle stated that Loket was “something to build on” and it really was. A ninth in each moto made for an uneventful weekend that was desperately needed. Searle has shown speed, which we can all agree on, but has encountered so many issues this year. That Czech GP was the first time since Qatar that he has finished in the top ten in both motos! Madness, right? Mechanical issues and a couple of crashes have cost him valuable points along the way.

– Little was expected of Kevin Strijbos entering Loket, seeing as he has spent a lack of time on the bike recently. A second in the qualifying race sparked intrigue though, as he was clearly competitive, but a lack of fitness shone through in the longer motos. Loket has obviously been kind to him in the past, as he has been in the top five in the last six motos that have been run there. 2012 was the last time that he did this poorly at the old-school circuit, as he finished fourteenth overall.

– It seemed that there may be hope for Christophe Charlier in MXGP a couple of months ago, but he has suffered a dip in form recently. The last time that he broke into the top ten was the GP of Trentino, which seems like an eternity ago now, and more is obviously expected of a factory rider. Charlier seems perfectly content with a pair of fourteenths though, as that was just all he could manage.

– Jose Butron, astonishingly, could only muster up three points on Sunday, simply because he felt the track didn’t suit his style. Some great starts couldn’t even help him, as he lost thirty-one positions across the two motos. That makes him the rider who dropped back the most over the weekend.

– The fact that Dylan Ferrandis only just acquired the second overall win of his career would surely surprise the casual fan, as he is one of the most-decorated riders in MX2. Loket was the first time he has gone 1-1, so he managed to tick that off his list before he heads to the USA. Ferrandis now has five rounds to beat Jeffrey Herlings to win an overall, which he has not yet managed to do.

– The current standings support the fact that those in MX2 are wildly inconsistent, as Jeremy Seewer is the only rider to finish all twenty-six motos! No other riders have come close to that, as everyone else has missed at least two races. That would make Seewer tough to beat, if he wasn’t going up against the unstoppable force that is Herlings.

– Although Seewer has second in the MX2 standings on lockdown, Suzuki find themselves in a tight battle for the runner-up spot in the manufacturer standings. Fifteen points separate them from Kawasaki at the moment and all their hopes rest on Seewer, whilst Kawasaki are all in with Ferrandis.

– Should things go pear-shaped for Ferrandis, Kawasaki may be able to rely on Petar Petrov. Petrov returned to prominence with his first top-six moto finish since the GP of Latvia. The reason behind his rebound is that he has simply had time to recover from some niggling injuries that hindered him through the recent rounds.

– The opportunity to win can cause some to falter under pressure, which may explain the mediocre starts that Benoit Paturel had to overcome at Loket. Paturel made seventeen passes across the two motos and showed good speed along the way, but was left with a 4-5 scorecard and now faces stiff competition from his countryman for fourth in the standings.

– Max Anstie commented post-race that he has again missed out on an opportunity to capitalise on the misfortunate that Jeffrey Herlings has encountered, thanks to a string of issues. Interestingly enough, if you give him a sixth place in each of the six motos that he has failed to score in then he would be third in the points now. Instead Anstie finds himself clambering to salvage something from what has been a turbulent final campaign on the 250F.

– You do not get two motos that are more different than what Thomas Covington had on Sunday. In the first he simply struggled to make progress after a bad start and could only a manage a fifteenth, then he ran up front in the second after taking advantage of a great start. Remember the inconsistency that we mentioned earlier?

– It seems that Jorge Zaragoza will not have an opportunity to fulfil his potential this season, as a dislocated shoulder forced him onto the sidelines at Loket. Zaragoza has finished in the top ten just four times this season, which is an improvement over the two times he did it last year. A lot more is expected of the Spaniard, however, which is reflected by the fact that he is one of the most-professional teams in the paddock.

– Conrad Mewse has, amazingly, found some consistency since making improvements at the GP of France. In the last eight motos, his average finish has been a tenth. That is the same as his teammate, Max Anstie, and slightly better than Thomas Covington.

–  Adam Sterry showed more potential on Sunday with the best ride of his career, as he ran second for seven laps and ended up with the third-fastest lap. A goggle and neck brace issue in the second MX2 encounter cost him dearly, but once again the speed is there for everyone to see.

– An unfortunate string of injuries continues for Davy Pootjes, as he didn’t start the second moto due to some inflammation in his wrist. Pootjes made a trip to the hospital on Monday, but as of right now his status for Lommel is questionable. At least he managed to enter the top ten for the third time this year in moto one, which is something.