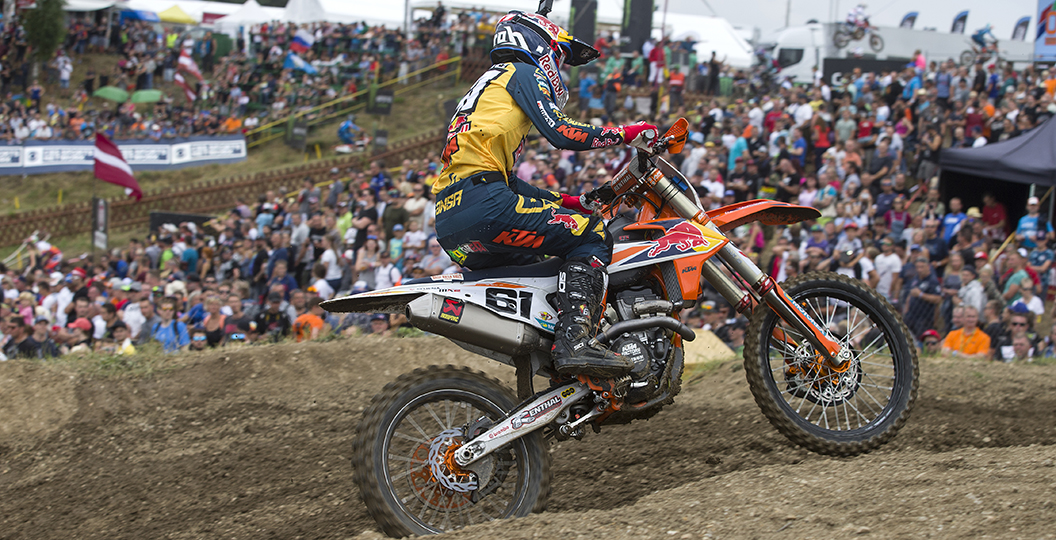 There are just six rounds of the FIM Motocross World Championship remaining now, so the end really is in sight. Champions will be crowned in less than two months and all debates would have been settled. There is more uncertainty surrounding the MX2 class more than anything else currently, seeing as eleven points separate the two protagonists, hence why it seemed like a wise idea to gather statistics that could make that picture a little clearer.

– Fourteen rounds of the FIM Motocross World Championship have been run thus far and Jorge Prado has led more laps than anyone else through that time, even though he did not lead his first lap until the fourth fixture in Italy. Two hundred and three laps have been led by him at this point in the season, whereas Pauls Jonass has been out front for one hundred and eighty-two laps. How incredible have those two been? Thomas Covington has led the third highest number, sixty, but cannot compete with the totals that the two contenders have gathered.

– Jorge Prado has led at least one lap at ten of the fourteen rounds that have been run thus far. Prado did not get out front at all at Neuquen, Valkenswaard, RedSand or Pangkal Pinang. Jonass, on the other hand, has only led laps at seven of the rounds; he missed out at Pietramurata, Agueda, Kegums, St. Jean d’Angely, Ottobiano, Pangkal Pinang and Loket. This means that the former, Prado, has been consistently superb, but also indicates that Jonass makes the most of his good weekends. The following point builds on that…

– Leading more than twenty-five laps on a single weekend indicates that a guy had a dominant weekend. Pauls Jonass has done that four times this season (Neuquen, RedSand, Pietramurata and Orlyonok). Jorge Prado has also managed it on four occasions (Pietramurata, Agueda, Ottobiano and Semarang). It is actually surprising that Prado has not managed it more than Jonass, as his incredible ability to take the holeshot would set him up well to lead every single lap of a race. Anyway, the pair are fairly even in that category.

– A lot of fans wanted to know why Pauls Jonass had the red plate in Czechia, rather than Jorge Prado, but it was because of the fact that he had more moto wins entering the race. This is one category that Prado trails in, as he has only scored nine moto victories out of twenty-eight starts. Jonass has won twelve of those, thanks in part to his impressive start to the season, so would still win if a tiebreak is needed. Prado would have to win four motos more than his rival through the final six rounds in order to take control of this.

– To establish who holds the momentum, it is worth splitting the current season into two halves. Points from the first seven rounds are below and it does not take a genius to figure out that Pauls Jonass was the strongest through that portion. Jonass won eight of the fourteen motos, compared to the four that Jorge Prado acquired, and also led one hundred and thirty-five laps. What he would give to have that kind of form again! It is also worth noting that he dropped off of the podium just twice across the seven events.

– The most recent seven rounds tell a completely different story. A different Pauls Jonass has turned up and handed all momentum to Jorge Prado, who has won five of the fourteen motos. Jonass, on the other hand, has acquired four of those victories. Jonass has only managed to transform those triumphs into a single Grand Prix victory though, whereas Prado has stood atop the box five times, and has only led forty-seven laps, which is a huge drop when compared to the first seven rounds. Prado has led one hundred and fourteen laps.

– It is actually surprising that Jorge Prado has not swept both motos at a Grand Prix much this season; he has done that just once (Agueda). Pauls Jonass has claimed two moto wins at five of the events though, which goes back to maximising those good days. All five of the overall victories that Jonass has had this season have been acquired by taking two race wins on the day, surprisingly, so it seems he is unbeatable when he is on. The gulf between the good and bad days has been much more noticeable this season though.

– The fact that Pauls Jonass has made less trips to the overall podium than Jorge Prado highlights that. Prado has been up on the podium at twelve of the fourteen rounds, which is an impressive percentage, as he only missed the box at Neuquen and Kegums. Jonass has missed it five times (Pietramurata, Agueda, St. Jean d’Angely, Pangkal Pinang and Loket) this year. Most notably, however, he has only made it up there twice in the last five events, which offers some insight into current form.

– Getting a good start is crucial for riders of all levels, but especially those in MX2. Thomas Covington, Thomas Kjer Olsen, Ben Watson and Calvin Vlaanderen are all on top form currently and that makes it incredibly difficult for a title contender to push through following a difficult start. Jorge Prado has not experienced that much this season, as he has taken the holeshot seventeen times. Pauls Jonass, on the other hand, has only reached the first turn in first four times from twenty-eight starts.

– Minimising the damage on your worst day is also an integral part of becoming a champion, so who has done that this season? The Grand Prix of Patagonia-Argentina was the worst event for Jorge Prado, as mentioned previously, because a handful of different issues left him with just nineteen points on the day. Pauls Jonass still scored thirty points on his worst day of the year though, as he recorded a fourth and a ninth on the hard-pack of Pietramurata. The former series leader ended that event in fifth overall.

– Finally, another category that Jorge Prado reigns supreme in. Prado has qualified on pole position more than anyone else this season, as he has managed it at six of the fourteen rounds. That is almost fifty percent! Pauls Jonass has done it four times in total, but just once in the last eight rounds. Most believe a good qualifying position is now integral in the races on Saturday, unlike in the past. There may be no points up for grabs on Saturday, obviously, but those races can have an impact on the standings.