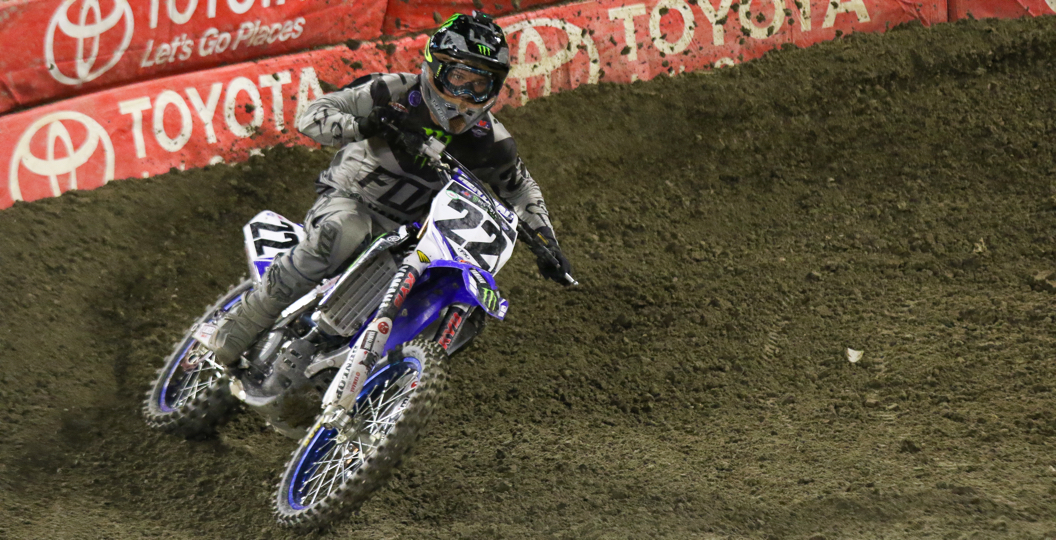 When an event is as packed with action as Anaheim 2 was, it is inevitable that you will overlook certain things. For instance, do you know what happened to Hayden Mellross? Our regular Stat Sheet feature answers that question and uncovers some intriguing statistics from the third Monster Energy Supercross round. Delve in, take your time and enjoy.

– It was rather peculiar to see Ryan Dungey benefit from additional track time on Saturday night, as he rarely fails to transfer straight from the heat race. The semi races were introduced to the programme again three years ago, but Dungey has only had to race them twice since then. The two times that he did, Anaheim 1 and St. Louis last year, he went on to finish on the podium in the main event.

– When was the last time someone qualified so poorly, but went on to win the 450SX main event? Well, funnily enough, it was Ryan Dungey at Angel Stadium! Dungey withdrew from the heat race with a shock malfunction four years ago, then only finished second in the last chance qualifier, so went to the starting line in twentieth.

– A second place for Marvin Musquin may not seem like much, but he has not finished in that position too much in his short 450SX career. Anaheim 2 was the fourth time that he has taken the runner-up spot, actually, and his eighth trip to the premier-class podium. Musquin currently has double the amount of points that he did at this point last year!

– After moving into second on lap twelve of twenty-two (the timed main events were again a factor), Musquin gained a considerable amount of time on Dungey. The Frenchman posted faster lap times than his teammate on eight of the final eleven laps! He was two seconds down when he crossed the finish line, which was actually closer than he was in that nail-biting race in Atlanta last year, and had the fastest average lap of the race.

– Although the Red Bull KTM duo crossed the line in first and second at Anaheim 2, they were not the fastest riders. Ken Roczen set the fastest lap time of the race (56.259) and his teammate, Cole Seely, recorded the second-quickest time (56.368). Dungey (56.430) and Musquin (56.493) then had the next best lap times. Seely was actually quite competitive in the main event, even before Ken Roczen crashed out, as you’ll see in the table below.

– Team Honda HRC have a lot to thank Cole Seely for, as his third place enabled them to maintain their lead in the manufacturer standings (with seventy points in total). They lead KTM by just one point at this point in the series. Where were they at this point last year? Fourth, with fifteen points less than they have currently. They were actually second the year before that though, with sixty-five points, so they have been competitive in recent years.

– Finishing in fifth was quite the improvement for Weston Peick. After enduring a turbulent twelve months, he has rebounded aboard a RM-Z450. Peick failed to finish in the top five at all last year, as his best result was a seventh, but managed it six times the season before that. ‘32’ also managed it to do it twice aboard a privateer machine three years ago.

– An eighth was far from what Eli Tomac expected entering Anaheim 2. In fact, even though his stint at Monster Energy Kawasaki has been underwhelming, he only finished worse than this twice last year. Tomac does currently have the second-best qualifying position on average, despite his sub-par finishes, so that is something to cling onto. Before this year, he had finished outside of the top seven just nine times in his premier-class career.

– Just six riders managed to maintain their perfect record of top-ten finishes at Anaheim 2. Dungey, Musquin, Seely, Tomac, Peick and Davi Millsaps have not dropped out of the top ten yet. Just three of those riders (Dungey, Seely and Tomac) managed it through three Monster Energy Supercross events last year.

– Despite the fact that he has had some brilliant qualifying times, Blake Baggett only just entered the top ten for the first time this year on Saturday. Baggett is hardly renowned for his supercross skills, as he has enjoyed a lot more success outdoors, but he has actually been quite good since making his 450SX debut two years ago. In the thirty races that he has completed, Baggett has finished in the top ten seventeen times.

– A lot of riders garnered a season-best finish in the premier class on Saturday, like Baggett. Who else managed it? Dungey, Musquin, Seely, Cooper Webb, Peick, Josh Grant, Chad Reed, Dean Wilson, Broc Tickle, Justin Brayton, Christophe Pourcel and Tommy Hahn all improved on their finishes from rounds one and two. That is a crazy number of riders, right?

– Who made the most progress in the main event on Saturday? Broc Tickle jumped up to twelfth, after a crash pushed him back to twenty-second at the end of lap one. Ken Roczen obviously dropped back more than anyone else, following that horrific crash, as he was classified fourteen spots down on where he started.

– Although the RCH Yoshimura Suzuki team were elated at how Tickle performed, they had to watch their other star succumb to injury. “I went to the hospital to get checked out and, fortunately, there was not anything major,” Justin Bogle explained in a team statement. His status for Glendale remains a mystery, but he could potentially miss rounds three to five for the second year in succession.

– The fourteenth place that Christophe Pourcel achieved at Anaheim 2 may not be the most impressive, but he has not actually done too much better than that in his career. The Frenchman, who has been described as enigmatic countless times, has finished in the top ten in four of the thirteen 450SX races that he has completed. “I’m happy I am healthy,” explained Pourcel post-race.

– That eagerness to stay healthy has stopped Pourcel from pushing the limits and ultimately hindered his results. He rarely gets amongst it at the start of a race and, when you take all of the 450SX main events that he has completed into account, he has had an average starting position of fourteenth! He has started inside of the top twelve on just three occasions in his career.

– When perusing the results, you may be alarmed to see Malcolm Stewart down in eighteenth. The younger Stewart brother, who had completed one 450SX race prior to Anaheim 2, ran eighth for a majority of the race, but fell towards the end and dropped backwards. He has the ninth-fastest time of the race to hang his hat on though!

– Justin Hill stood atop the 250SX podium for the fourth time in his career on Saturday night; three hundred and sixteen days had passed since his previous victory in Toronto. Two of his victories (Anaheim 2 on Saturday and the 250SX East/West Shootout three years ago) came after leading every single lap of the main event and three off them have been in the 250SX West class, rather than on the opposite coast. This is the third time that Hill has raced on this coast, but he has also raced the 250SX East class twice.

– Although those in the 250SX division have a reputation of being inconsistent, seven riders have not dropped out of the top ten yet. That is one more guy than in the premier division! Those seven (Shane McElrath, Hill, Aaron Plessinger, Martin Davalos, Austin Forkner, Jimmy Decotis and Jeremy Martin) have separated themselves from the rest of the field in recent weeks.

– Plessinger has been remarkably consistent this year, but also throughout his indoor career. The Yamalube Star Racing Yamaha pilot entered the pro ranks two years ago now, but has dropped outside of the top five just five times! Mediocre starts have been a common issue, however, as he has had an average-starting position of ninth across the twenty-one main events that he has completed. Anaheim 2 was just the fifth time that Plessinger has ended lap one inside of the top three.

– Like Seely in the 450SX class, Shane McElrath kept the title hopes of his manufacturer alive at Anaheim 2. A third place in the main event ensured that KTM continue to lead the manufacturer standings in the 250SX West class, as they have a six-point advantage. McElrath has consistently been the best guy across three rounds; he has the best average-qualifying position, starting spot and finish in the main events! Consistency has been his greatest strength.

– Austin Forkner had the best finish of his short career at Anaheim 2, but who else grabbed a season-best result? Hill, Tyler Bowers and Josh Hansen. A tip of the hat to Noah McConahy, Martin Castelo, Ryan Surratt and Bryce Stewart also – those four entered the main event for the first time this year.

– Hayden Mellross has recorded some underrated riders thus far, but his momentum came screeching to a halt in the main event on Saturday. The Australian crashed in turn one and, as a result of that, his hand “is damaged somewhat,” but he will line up in Glendale on Saturday night. A ninth in San Diego is a good indication of what Mellross is capable of achieving.

– Jeremy Martin was also caught up in that first turn crash, so continues to struggle to emerge from the first turn near the front of the pack, and now has an average-starting position of eighteenth. Just two other riders in the top twenty have started in a worse position on average!

– The good news for Martin and Geico Honda is that he recorded the fourth-fastest time whilst ripping through the field, but he does now face a deficit of thirty points. Riders have dug themselves out of bigger holes in the past. Jason Lawrence, for instance, was thirty-four points down after three rounds in 2008, but still went on to win the title. 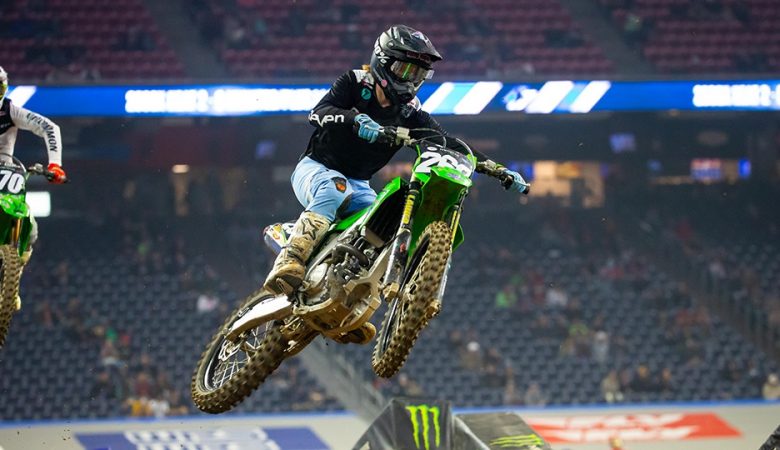 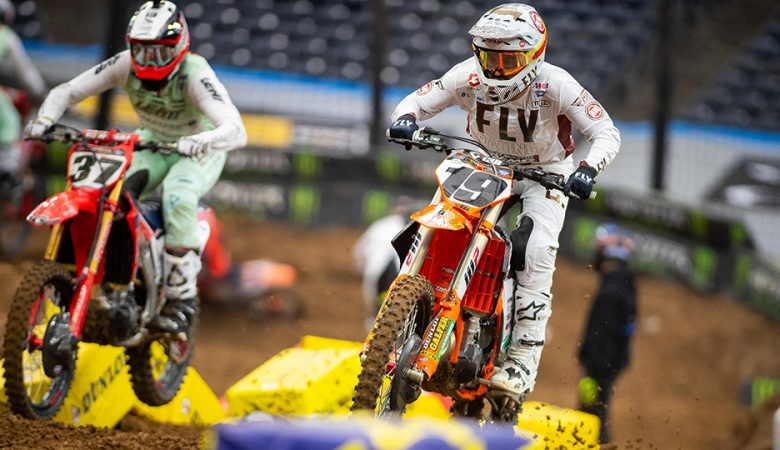 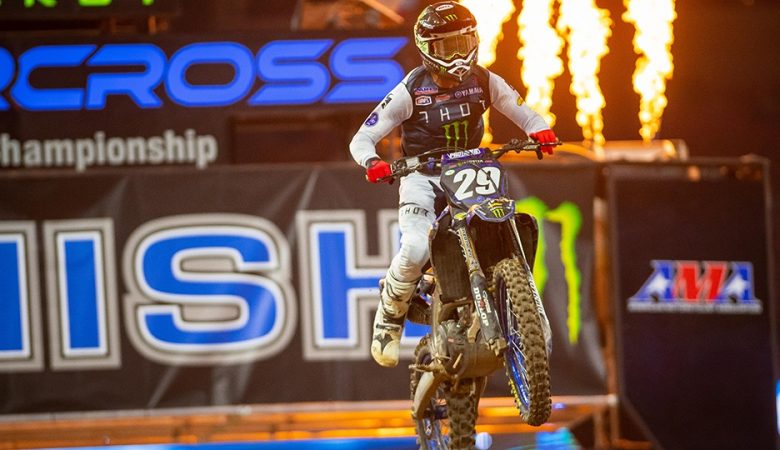 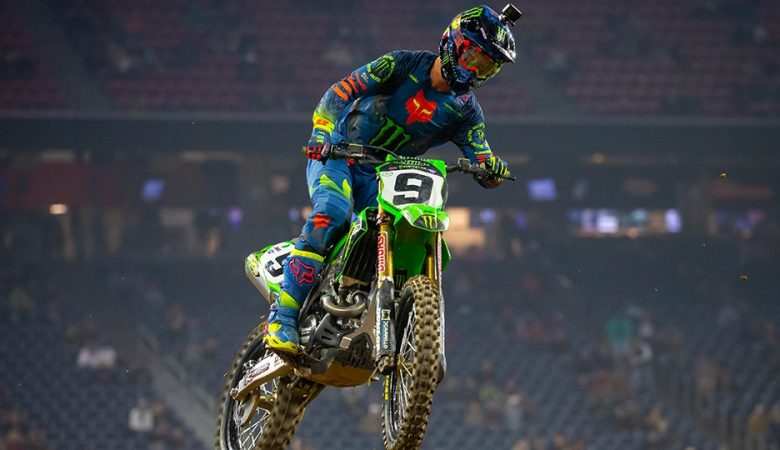