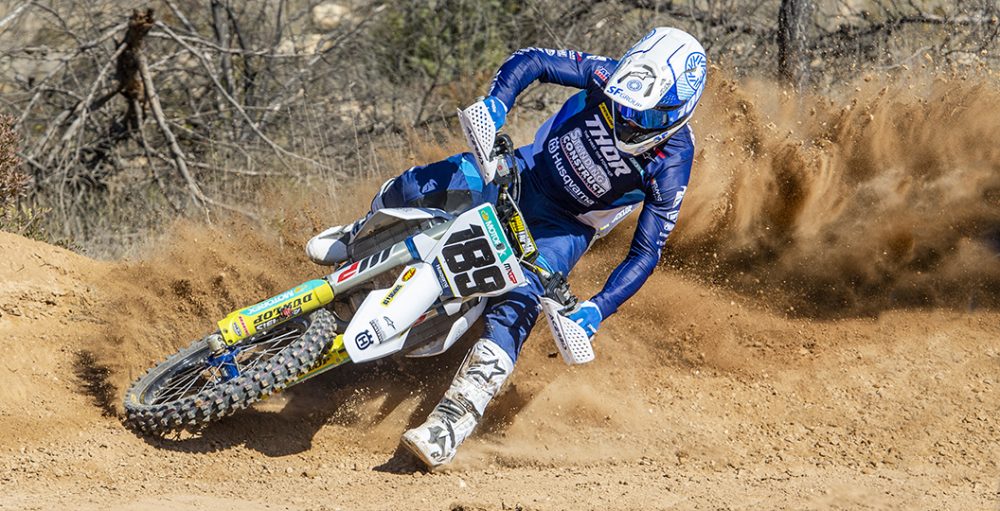 Standing Construct Husqvarna Factory Racing may be the most underrated team heading into the 2022 FIM Motocross World Championship. Pauls Jonass and Brian Bogers are both very capable, especially when armed with a full-factory FC 450, and should surprise when gates drop at the Grand Prix of Great Britain this weekend. Jonass only had one podium last term, but he was capable of so much more and recorded countless fourth-place finishes.

Tim Mathys, the Standing Construct Husqvarna Factory Racing team owner, discusses how much potential his two riders have in this interview, which was provided by Husqvarna Motorcycles. Mathys also touches on how his team prioritises rider comfort on and off of the bike, something that countless riders have referenced when riding for Standing Construct. Max Anstie, Glenn Coldenhoff, Ivo Monticelli, Pauls Jonass, Valentin Guillod and a lot of other guys have thrived under the watchful eye of Mathys.

The 2022 FIM Motocross World Championship marks the beginning of a new era for the Standing Construct Husqvarna Factory Racing squad, managed by Tim Mathys. Eager to see both Pauls Jonass and Brian Bogers begin the campaign in their new colours, Mathys looks back on a very busy winter period in this pre-season chat.

Husqvarna Motorcycles: It must have been exciting when Standing Construct Husqvarna Factory Racing’s new look was unveiled to the world. How special is it to be given the opportunity to lead Husqvarna into the MXGP class?

Tim Mathys: Well, we are very happy that the factory gave us such a chance. It was a very short off-season, of course, so it was a busy period when we were switching bikes and colours. It took a lot of time! We have stayed in the same family, so we already had a good base and working with the Austrian factory is brilliant. They do not make things complicated for us at all! If we have a question or a remark, we send an email and then we have an answer one hour later. That helps so much with the situation that we are in now! Yeah, it was a short off-season. I think we are ready though; the bikes are ready for Matterley Basin and so are the riders.

There are a lot of changes, but you have the same rider line-up with Pauls Jonass and Brian Bogers. You must be happy to retain their services, because it seems like you have good chemistry at the team.

Yeah, I think that we have proven that guys are happy to ride for our team. We treat them in a way that ensures that we can get the best out of them and from what I hear they are very happy. It is the same for all of us! Both Pauls and Brian are professional guys; they work hard on the bike and off of it. It was a short off-season for them too, but we are pretty happy and ready for the weekend.

Pauls had a really good season last year. There was only one podium finish, but he could have had more in what was a rebuilding year. What do you expect from him in 2022?

Pauls had a lot of fourths last year – I think that is why some people do not give him credit for last year.  What we also have to keep in mind is that the year before he rode a few Grands Prix but was in hospital and the rehabilitation centre for the rest of the year. Nobody believed in Pauls anymore – he could not find a ride. We believed in him though; I spoke with his former trainers and they explained what a great guy he is. We gave him a chance and I think that he has proven that he deserved it. We are pretty confident that he will do even better this year.

Brian proved how good he is by taking the MX1 victory at Hawkstone Park on Sunday, but he had a really solid season last year too. Do you expect him to be around the top five a lot in the coming months?

Yeah, that is what we hope! Brian had a few top-five finishes last season. The only thing that he has to work on is his starts, because he has the speed! When he is riding in a moto, he is very consistent and always has the same speed. Those starts are so important though. I am sure that he will be much stronger than last year when he has a better reaction out of the gate.

MXGP is returning to normality this year. We are going overseas and returning to a two-day format. How excited are you to see the series return to a traditional format?

Well, like everything in life, it is also important in MXGP. For me personally, I like the fact that there will be a qualification heat on Saturday. It makes Saturday important and then you can focus on the races on Sunday. We are excited to see the public back at the races too – we can treat our sponsors in the way that they deserve as well. Everyone deserves to come to races and have an enjoyable experience.